We now need to link that to the ‘horizontal’ axis of the supply-chain:

To make sense of this, we first need to look in some depth at what actually happens in a market.

Even at a first glance it should be evident that markets are transactions – there’s a lot going on, and on the surface at least, most of it is about deals, about supply-and-demand, about ‘things’, and those ‘things’ being exchanged. (And paid for, of course, in a commercial market – a point we’ll need to come back to later.) This is the most visible part of the content of the supply-chain channels.

And as Doc Searls, one of Cluetrain’s authors, discovered in an airplane conversation with a Nigerian pastor named Sayo, markets are relationships too:

[Sayo] went on to point out that, in his country, and in much of what we call the developing world, relationship is of paramount importance in public markets. Transaction still matters, of course. So does conversation. But the biggest wedge in the social pie of the public marketplace is relationship. Prices less set than found, and the context for finding prices is both conversation and relationship. In many cases, relationship is the primary concern, not price. The bottom line is not everything.

Transaction rules the Industrialized world. Here prices are set by those who control the manufacturing, distribution and retail systems. Customers do have an influence on prices, but only in the form of aggregate demand. The rates at which they buy or don’t buy something determines what price the “market” will bear — in a system where “market” means aggregated demand, manifested in prices paid and quantities sold. Here the whole economic system is viewed mostly through the prism of price, which is seen as the outcome of tug between supply and demand.

Price still matters in the developing world, Sayo said, but relationship matters more. It’s a higher context with a higher set of values, many of which are trivialized or made invisible when viewed through the prism of price. Relationship is not reducible to price, even though it may influence price. Families and friends don’t put prices on their relationships. (At least not consciously, and only at the risk of cheapening or losing a relationship.) Love, the most giving force in any relationship, is not about exchanging. It is not fungible. You don’t expect a payback or a rate of return on the love you give your child, your wife or husband, your friends.

Even in the industrialized world, relationship has an enormous bearing on the way markets work, Sayo said. But it is poorly understood in the developed world, where so much “comes down to the bottom line”.

Finally, markets are purpose – as we saw in the previous section, the market is actually defined by the shared-purpose of the enterprise vision, the overall descriptor for its “common set of missions or goals”.

As Sayo says above, “Transaction rules the industrialized world”. By that, we typically mean the transfer of ‘exchangeable goods’ – through what is most often described as the ‘supply-channel’ or main-channel – and, separately and in return, payment or its equivalent – through what we might describe as the backchannel. And in its simplest form, ‘profit’ is the difference between the value-return that comes in from the backchannel from the customer-side, compared to the value-outlay that goes out on the backchannel on the supplier-side. Once we also subtract the value-outlay for internal costs of running the service itself, the result is the ‘bottom-line’ net-profit that is the near-obsessive focus of so many business-folk.

And the whole structure is a complex feedback-loop: for example, reputation – which itself is a kind of third-party precursor to trust – depends in part on whether the transactions are perceived overall as ‘fair exchange’. Hence before any transactions can take place, the relationships need to exist: and those relationships – and conversations too – are strongly linked to and dependent on the service’s value-proposition. Likewise after the transaction, there not only needs to be the backchannel exchange that completes the ‘fair exchange’ of the transaction, but that too also needs to link back to the value-proposition and the relationships, tying everything together in terms of the various definitions of what ‘value’ actually is within the overall enterprise.

So we have three distinct stages:

And all this needs to be symmetrical, in the sense that – within the overall market – this service that is our current focus is both a customer of other services, and a provider to other services, hence all of the above will apply in similar ways on both ‘supply side’ and ‘customer side’. We need ‘supplier relationship management’, for example, just as much as we need ‘customer relationship management’. And the value-transfers and follow-up need to be in terms of all forms of ‘value’ defined by the overall enterprise – and not measured solely in monetary terms, for example, no matter what the shareholders may demand! 🙂

When we put all of this together, what we end up with so far as a summary of the structure of any service – and the core of our Enterprise Canvas – is this:

A comparison with the Business Model Canvas would be useful at this point: 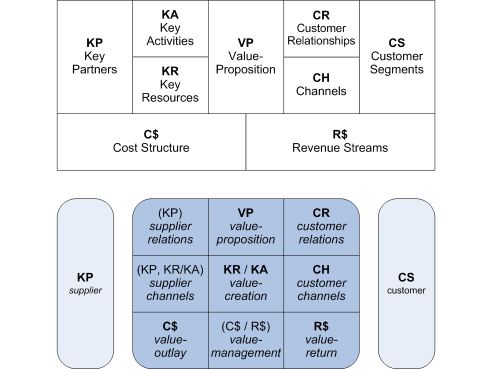 The Business Model Canvas [BMC] (upper) applies to a single context – the business-model for the overall organisation, at the ‘logical’ level of abstraction (relationships and attributes, as will be described in a later article in the series). The prototypic Enterprise Canvas [EC] (lower, cross-mapped to the BMC’s cell-labels) applies to any type of service, at any level of abstraction. There are also a few differences in the detail: for example, I’ve deliberately bundled the equivalents of the BMC’s ‘Key Activities’ and ‘Key Resources’ together into the EC’s ‘Value Creation’ cell, for reasons that become clear when we do a Zachman-style analysis of what actually goes on in there. The BMC’s ‘Cost Structure’ and ‘Revenue Streams’ are generalised in the EC to cover all forms of value-exchange or value-transfer, not solely monetary exchanges. And the EC’s symmetry of supply-side versus customer-side is absent in the BMC, which instead bundles several distinct types of activity into the one ‘Key Partners’ cell. But beyond that, they are quite similar – and need to be so, for the simple reason that both BMC and EC describe much the same entity, the activities of a service in delivering a value-proposition to the enterprise.

What’s also not covered in the BMC, and that we do need to include in the EC, is the structure and content of the flows between services. It’s useful to separate these out for the ‘before’, ‘during’ and ‘after’ phases of transaction, because they’re often handled by different groups of people and/or different sub-services within the overall service. And in some cases – as with the service’s interactions with its ‘non-customer/supplier’ stakeholders, such as government, non-clients, the local community or the general public – only one or two of the before/during/after categories of flows will apply. In addition, there are also some important differences in the emphasis of each flow:

We could typically illustrate these flows respectively as two people talking (‘before’), a package (‘during’) and a small pile of coins (‘after’). But since I couldn’t find the right icons, I’ve used symbols from the keyboard character-set as follows:

All of these flows may be usefully described in terms of the VPEC-T frame:

V (value) initiates the conditions in which the flow may take place; PEC (policy, event, content) represent the actual transaction, and actions taken subsequent to the transaction; T (trust) represents the feedback that adds to or subtracts from the expected V of further transactions of this type – and hence enables or disables future flows on this path.

Although all flows incorporate all of these elements, the respective VPEC-T emphases in each cell within the unit may be summarised as follows: 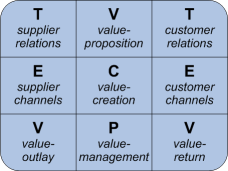 It’s important to note that the ‘value-creation’ cell is the core of it all, and also – as we’ll see later in the description of layering – is the only cell without direct external interfaces. More explanation on that in subsequent posts, anyway.

4 Comments on “The Enterprise Canvas, Part 2: Market and Supply-Chain”