↓ Skip to Main Content
Home › Business › What can we simplify in enterprise-architectures?

What can we simplify in enterprise-architectures?

A great conversation this morning with Nigel Green, about his post ‘When is striving for Simplicity in IT-EA a good thing, and when…?‘ (“…is it less important, or even unhelpful?”, was the completion of the sentence).

He’d been having a long discussion with another well-known figure in the IT-architecture space, who’d insisted that we should always aim to simplify. Nigel was uncomfortable with that assertion, in fact was all but certain it was only true under specific contexts, but wasn’t sure how best to describe those contexts or the differences between them.

At that point he turned to the diagram from his previous post ‘A thinking framework for Business/IT ‘Systems’ behaviour based on Cynefin‘: 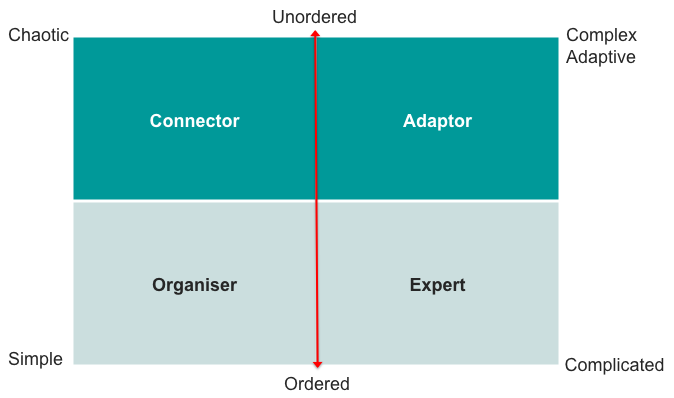 As you’ll see from his ‘Simplicity in IT-EA’ post, he then started filling in more detail about what each of those domains would look like in terms of IT-applications:

Which is a very useful way to split up the IT space.

But if we have just one domain called ‘Simple’, is that the end-point of all simplicity? Could everything become defined by simple rules? Could everything ultimately be reduced to definable IT? That other well-known figure clearly thought so. But Nigel didn’t; and neither do I. To explain why, I’ll quickly summarise what Nigel and I talked about in our conversation.

Some of the same themes can be seen in my previous post ‘Backbone and business-rules‘, which also points to Nigel’s earlier post above. Perhaps the key point is a slightly different way to use the Cynefin-categorisation, emphasising what we use for decision-making within each of the domains:

The crucial factor here is that there are fundamental differences between each of the domains.

In the Simple domain, cause/effect relationships are linear, and direct: we can use simple rules to drive decision-making. Simplification here consists of finding ways to reduce the number of rules, and to remove any duplications or conflicts.

In the Complicated domain, cause/effect relationships are still linear, but may be indirect, with multiple interacting factors, feedback-loops and delays. We can still use linear true/false logic – the kind that almost all computers use – but we can’t reduce it to simple rules: we have to use algorithms, and those algorithms can become very complicated indeed. Simplification here consists of cleaning up the algorithms, and identifying ways to simplify relationships between all the various factors: but again, it can’t all be reduced to simple rules.

In the Complex domain, at least some of the cause/effect relationships are non-linear: cause and effect become intertwined, and to some extent interchangeable. We shift from a simple true/false logic to a modal-logic (alethic logic of possibility, probability and necessity), with decisions guided by statistical patterns or more fluid guidelines. IT-systems shift from decision-making to decision-support, such as pattern-matching for final decision via ‘human-in-the-loop’; IT-based algorithms may be used for the pattern-matching, but cannot (or should not) be used for the final decision-making itself. Simplification here consists of refining the patterns and pattern-matching algorithms, and developing and refining training, education and guidelines for the human-element in the decision-making.

In the Chaotic domain, no distinct cause/effect relationships can be identified – typically either because the event is in some way unique or non-repeatable, or because it occurs at or near real-time, without sufficient time to assess causal links. Because there is no apparent repeatability, attempts to use true/false logic make no sense; decision-making is typically via principles or some other equivalent ‘guiding star’. Decision-making here will always require ‘human-in-the-loop’. The main role of IT-systems here tends to be information-capture and presentation: they cannot (or should not) be used for decision-making here, other than perhaps by inserting deliberate randomness into a human decision-making process to disrupt inappropriate assumptions and other ‘pattern-entrainment’. Simplification here consists primarily of clarifying information capture and display (decision-journey, user-experience, infographics etc), and of refining the applicable principles by identifying and clarifying priorities, conflicts and the like.

In the ordered domains (Simple and Complicated), repeatability can be eventually guaranteed, although varying levels of difficulty (‘complicatedness’) may be needed to achieve it. Einstein’s dictum applies here: we would be crazy to do the same thing and expect different results. In these domains it is possible for decision-making to be entirely IT-based: to many people, this brings a satisfying sense of ‘control’ over the context.

In the unordered domains (Complex and Chaotic), repeatability can not be guaranteed, regardless of how much effort is put into the analysis. (The distinction between ordered and unordered domains is qualitative, not merely quantitive: despite the assertions of many IT-folks, true complexity in this sense is not the same as ‘very complicated’.) Einstein’s dictum often becomes inverted here: we would be crazy to do the same thing and expect the same results. Any notion of certainty or ‘control’ here is illusory at best, and often a dangerous delusion. In these domains it is not possible (or rather, it is usually unwise) for decision-making to be entirely IT-based: efforts to ‘simplify’ by attempting to remove all ‘human-in-the-loop’ elements will often convert an already difficult problem into an irresolvable ‘wicked-problem‘, and will always make things worse.

Note that very few real-world contexts will fit solely within one of these domains; most contexts will include elements from all of them. One of the first requirements for simplification in IT-architecture or a broader enterprise-architecture would be to identify which elements of the context are in which of these domains – Simple, Complicated, Complex, Chaotic – and apply the appropriate simplification-techniques to each. Using one domain’s simplification-techniques in a different domain will usually make things less simple: if a context seems to be becoming more complicated, complex or chaotic, it’s probable that the wrong type of ‘simplification’-technique is being used.

4 Comments on “What can we simplify in enterprise-architectures?”