Why is it that some mornings start off with such a flood of ideas and connections that there’s no way to get it all down and done in the day? Hmm…

[One urgent point first: this is not about Cynefin. I’m not going there: don’t worry. It’s in the title only because I thought that if you’re a Cynefin practitioner, and you don’t already know Inayatullah’s ‘Causal Layered Analysis’, you may well want to add it to your complexity-toolbox. If so, the SCCC categorisation (Simple, Complicated, Complex, Chaotic) may help you to hook that technique into what you already do. That’s it: you can ignore everything else here. Just a friendly Public Service Announcement for you, that’s all. 🙂 ]

As you may have noticed, I’ve been doing a lot of thinking lately about ‘the wrongs of rights‘, and why I think they’re seriously problematic at every scale of an enterprise-architecture.

What came up this morning was a thought that Causal Layered Analysis [CLA] might be a useful tool for ‘the rights problem’. CLA was originally developed by Sohail Inayatullah around a decade ago, and has since expanded into a sizeable body of theory and practice, especially in the futures-domain. For more detail on the practical technique and the ideas behind it, see Sohail’s original paper on CLA (as published in Futures, October 1998) and the Wikipedia article. Here’s the introduction to the paper:

Causal layered analysis is offered as a new futures research method. Its utility is not in predicting the future but in creating transformative spaces for the creation of alternative futures. Causal layered analysis consists of four levels: the litany, social causes, discourse/worldview and myth/metaphor. The challenge is to conduct research that moves up and down these layers of analysis and thus is inclusive of different ways of knowing.

The way that CLA works in practice is indicated by the paper’s subtitle, ‘poststructuralism as method’: we apply academic-style ‘deconstruction’ (from linguistic-analysis etc) at each those four layers, or four ‘ways of knowing’, moving up and down the layers to elicit more information and experiences about and views on the overall context.

[Before reading any further here, I’d strongly suggest having a wander through those various materials on CLA – not least because without doing so, much of what follows may not make much sense. 🙂 ]

The view within ‘the litany’ tends to be a bit simplistic, a very polarised, rule-based and often Other-oriented view of the world – “they should”, “they shouldn’t be allowed to…” and so on – a relentless ‘litany of complaint’. The ‘social causes’ view tends to be a bit more nuanced, more aware of real-world complications; the ‘discourse/worldview’ more complex again; and… Well, you can see where where this is headed, because it obviously suggests a crossmap with the SCCC categorisation of ‘ways of knowing’:

Which is kind of interesting. And which suggests a whole stream of other potentially-useful crossmaps.

[Cynefin practitioners might want to stop reading at this point, because everything onward from here is an exercise in context-space mapping – a different technique. Some of it may look familiar at times, but I should emphasise that it’s not ‘legitimate Cynefin’. (Probably not ‘legitimate CLA’ either, but I doubt Sohail would mind as much.)]

To extend this context-space mapping [CSM], we can identify distinct ‘phase-boundaries’ between the domains in this ‘stack’, such as: 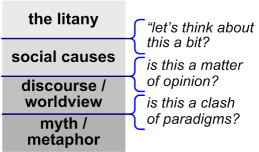 And we can also crossmap those domains with other views – for example, a Jungian-derived set of categories that align well with the CLA set, the set of sensemaking/decisionmaking tactics from the Cynefin framework, and another matching set of decision-drivers:

This suggests, for example, that ‘the litany’ would have a strong tendency towards over-certain and over-simplified notions of ‘the Truth’, endless blaming of ‘the Other’ without any form of self-reflection or self-analysis, and knee-jerk responses via over-simple categories, usually predefined by some self-appointed ‘Priest of The Truth’ in an opaque and often literally-unprincipled way. Which might kinda suggest a new verb, ‘to murdoch’, as in ‘to murdoch the truth’? (for which the shorthand might be ‘Fox News’? 😐 )

[I’m not saying that’s ‘the truth’, by the way: that would itself be an overly-Simple view. Context-space mapping is more a Chaotic-domain technique, a way to elicit ideas that may be of value in a given context, but they may also not be of value in that context. That’s the whole key to understanding CSM: its usefulness, but also its risk, is that it depends on having the skills and experience to determine what is or is not of potential value in a context. Please do take care, because misplaced notions about ‘true’ or ‘not-true’ can be disastrously misleading here.]

This crossmap also conflicts quite a bit with the standard Cynefin description of the Chaotic domain that kind-of implies the Chaotic is somewhere we’d usually need to get away from as quickly as possible. The CLA mapping here suggests instead that the Chaotic is a valid and important domain in its own right – somewhere that might well be challenging at a deep personal level, but also where we might want to stay and explore for a while, until the depths get a bit too much and we need to come back elsewhere for air. But notice that in context-space mapping, that kind of apparent-conflict is perfectly okay: both views are ‘true’, the concern is more about which view is useful for a given purpose.

Anyway, at present, this is still a single-axis ‘vertical stack’; yet that last crossmap suggests it’s also a kind of two-axis matrix. To resolve that, we can twist the ‘stack’ into a Cynefin-like layout, with a central ‘the-everything’ domain to remind us that both perspectives are ‘true’: 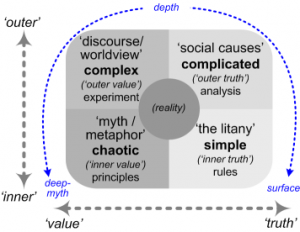 Which is interesting in itself – for me, at least, because it brings up more ideas about how and where and in what contexts to use CLA, and when to switch between the different types of deconstruction that apply in the respective CLA layers.

Previous experience with this type of context-space map also suggests another crossmap-overlay, in this case another vertical axis of timescale, from real-time at the base to infinity at the top:

Which for me is a bit of an eye-opener, with important implications for CLA. The point is that any sensemaking and decisionmaking in the Complex or Complicated domains – ‘discourse/worldview’ or analysis of ‘social causes’ – will take time: a fact that will be painfully obvious to anyone who works in those domains. So as the available time gets squeezed – whether because we’re moving towards real-time anyway, or because of social-panic and similar pressures – we end up being forced more and more into the sensemaking/decisionmaking spaces of the Simple and the Chaotic: otherwise known as CP Snow’s ‘Two Cultures‘, the classic worldviews of the sciences and the arts respectively. (We might also note, using CLA recursively, that the assertions of their respective paradigms become more and more extreme as we move towards real-time.)

What this also suggests is that when a culture is under stress, it will automatically tend towards this kind of ‘Two Cultures’ dichotomy between ‘Truth’ (Simple) versus ‘Value’ (Chaotic) – which, yes, is a dichotomy that itself often becomes over-Simple. The ‘Truth’-meme will tend to dismiss anything ‘not-True’ as ‘anarchic’, but its inherently constrained set of categories will, almost by definition, never be sufficient to deal with inherent-uncertainty: hence the kind of ‘collapse into chaos’ described in the Cynefin model. On the other side, the ‘Value’-meme is – again almost by definition – seemingly unlikely to generate any kind of stable categorisation via which a Simple-domain mode can make sense.

What we see in practice is that as the social stress increases and the links between people fragment, those Simple categories of shared ‘inner-truths’ – “what is True for we” – tend to separate out into self-specific ‘inner-truths’ – “what is True for me‘. This also leads a loss of awareness of the necessary mutuality of responsibilities that underpins all social constructs such as ‘rights’, such that ‘our rights’ becomes reframed solely in terms of ‘my rights’: “we hold these truths to be self-evident” morphs into a self-centred demand to the Other to “hold my truths to be self-evident”, and so on.

And without shared-categories, any social structure based on a Simple ‘sense / categorise / respond’ will by definition start to break down. The usual result is a spiralling descent into an out-of-control litany of complaint, first to ‘What’s in it for me?’, then ‘Me first!’, to a fully self-centred ‘Me-only!’, and eventually a truly chaotic cacophony of ‘Me! Me! Me!’ – otherwise known as ‘kiddies’-anarchy’. In a very literal sense, the Simple inherently becomes chaotic. And there doesn’t seem to be any direct ‘truth’-based path back from there, other than via some forceful imposition of rule and rules: either the ‘dictator’s gambit’ or, in rarer cases, the ‘Truth of the Prophet’.

Yet from the opposite side of the ‘truth/value’ dichotomy, what does seem to work is a re-focus on ‘inner-value’, on deep-principles and, especially, deep-myth. It has a surface appearance of the Chaotic, but actually develops its own simplicity: a functional and, often, highly-disciplined form of anarchy, rather than a dysfunctional one. Given that sensemaking/decision-making pattern of ‘act / sense / respond’, the very act of expression often means that whatever arises automatically takes on a social form.

Again, from practical experience, these context-specific images seem to act as ‘seeds’ around which directed action can coalesce – much as would happen in a more usual move into the Complex-domain, except that the time-pressures or social-context pressures mean that it actually remains within the ‘pressure-cooker’ of the Chaotic. The more that the focus can be held in this mode of the Chaotic-domain, te more ideas can be created – and the more the emphasis is held on the decision-making guides of the respective principles and values, the more likely it is that these ideas and images will be experienced as ‘of value’ within that context. The ways in which directed-action can coalesce around these ‘seeds’ can sometimes – perhaps often – lead to enough of a structure to enable a Simple-type ‘sense / categorise / respond’ mode of decisionmaking: in other words, something that is more generally actionable than a highly-personal ‘inner-value’. Which, in turn, can provide enough of an anchor for a more balanced and principles-guided way out of the crisis – a ‘values‘-based way back to ‘truth’.

To summarise this in much shorter form, what this suggests is that the key people in a major social crisis are the artists and the storytellers. The military-commanders and managers and the priests – the ‘truth-holders’ who maintain order – may come to the fore before the collapse, or after the recovery has started: but in the midst of the crisis it is those who normally live close to Chaos to whom the baton must be passed.

Cross-mapping Causal Layered Analysis with the SCCC-categorisation and the ‘now’-to-‘infinity’ timescale can deliver some useful insights about how to address high-stress social contexts – such as the kind of ‘mess’ that our entire global economics seems likely to be heading into at present. The main points I see arising from the cross-map include:

Some points specific to whole-enterprise architectures:

In effect, this is a method to define a governance-process for use in contexts where a conventional rule-based approach to governance will naturally break down – an interesting architectural recursion!

Anyway, enough for now: over to you for comments/suggestions etc?