↓ Skip to Main Content
Home › Business › Enterprise architecture › The no-plan Plan: the ‘why’ of architecture

The no-plan Plan: the ‘why’ of architecture

A bit more detail on what I see coming up in my ‘no-plan Plan‘, starting with the theme about ‘the ‘why’ of architecture’.

One thing I’ve always found worrying in most current ‘enterprise’-architecture is that there’s been almost no attention given to the ‘why’. It’s seemed that ‘why’ was just a given: ‘orders from above’, to be followed without question, “ours not to reason why” and so on. Like as if it didn’t matter. To give just two examples, both TOGAF and Archimate still regard modelling of motivation – the reasons why we do something, or anything at all – as an optional add-on or ‘extension’ to the architecture. (I’m not joking: go check ’em out – and the Archimate ‘extension’ won’t even be officially released until version 2.0!) Pardon me if I say that that’s just plain daft…?

Okay, step back a bit. Point to something in current EA that does work, namely the layering of abstraction in Zachman:

(Note that the original only has five rows, 1-5, which relate to the types of views for different stakeholders responsible for making something happen. Structurally, though, these views also represent layers of abstraction, to which I’ve added a row-0 to indicate indefinite-future, and a row-6 as unchangeable-past. It seems there’s also likely to be a need for a ‘row-00’, to represent the broader context within which all enterprises exist, but I’ll expand on that point some other time.)

Whenever we look ‘upward’ to a lower-number row, we’re asking ‘Why?’; and whenever we look ‘downward’, towards the future/past boundary of the ‘Now’ that sits between row-5 and row-6, we’re implicitly asking ‘How?’ and ‘With-What?’. Row-0 represents a fully-abstract and unattainable idealised-future (the ‘Vision’ and suchlike, that drive the overall enterprise); every move ‘downward’ is a step closer towards making that vision become more tangible in the real world, until at row-6 it’s already been made as tangible as it’s ever going to be.

So what? What’s the point?

Short answer is that if we don’t know why we’re doing something, it’s easy to make inappropriate choices, or ineffective choices. Or fail to realise even that we do have choices. Which, in a period of accelerating change, might literally be a life-critical concern…

I’m one of those people cursed with a mind that balks against taking anything for granted, wants to see the logic (or reasoning, rather) behind every decision, every option. Which, in a world that seemingly lives on unquestioned assumptions, can be, uh, a bit problematic:

— “Ya gotta climb the corporate ladder!”, they told me.

— “Because everyone’s gotta climb the corporate ladder! – gotta be better’n everyone else!”

— Uh… how can everyone be better than everyone else? And what do you mean by ‘better’? – ‘better’ in what sense? And why is the ladder leaning against this wall and not that one? And what’s on the other side of the wall, anyway? What’s the purpose here? What’s the point? Why?

— “Look, just shut up and go away, willya, kid? … Next! Hey, you, you other kid over there, ya see this, it’s the corporate ladder! Ya gotta climb this! Ya just gotta! – but-please-don’t-ask-me-why-cos-I-don’t-know-either…”

I never did get to climb that corporate ladder; never even been a ‘permanent’ employee, for that matter, so I never had much chance to do so anyway. But still kinda doubting that I would have wanted to do so even if I could – other than perhaps to see what was on the other side, much like that other well-known matter with a chicken and a road. Hmm…

But why that need for why?

If we don’t ask why, we don’t get to move up those layers of abstraction. And if we don’t move up those layers of abstraction, we don’t get to see new options and new choices. To make things happen, it’s true that we need everything to be complete, locked together, fully tested, fully working. But as I put it some while back, a ‘something’ is usable to the extent that it’s architecturally-complete; but it’s re-usable to the extent that it’s architecturally-incomplete. And when things change around us, we usually can’t keep going indefinitely just with ‘the way things are’: something has to change, in order to cope with the changes and still keep things sort-of-the same.

And even if things do stay much the same, we can’t know how to make something more effective unless we know its actual purpose – both in itself, and in the broader scheme of things.

To see that practical purpose, and to spy out other options, we need to able to get a broader view of things.

Which means we’ll have to go up a bit, to get that broader ‘big-picture’ view.

Which designers and enterprise-architects and so on do indeed do, all of the time, of course. But only sort-of. In most cases they sort-of climb about half-way up, and then come to a sudden stop, seemingly declaring that there isn’t any more ladder to climb, and yes, kid, if you happen to notice that the ladder does indeed keep on going ever upward, just shut up about it, willya? Okay, yes, fine, understood, boundaries of authority in a feudal-style cultures and all that – except, uh, I can’t help but see that that ladder of ‘why’ does keep on goin’ up, and I really really really want to know what’s up there… That kind of feeling… Really frustrating…

Which is why, sorry, but I just can’t stop asking ‘why’.

Which can, uh, cause a few problems. Especially for me. Oh well.

To put it in more visual terms, ‘classic’ ‘enterprise’-architecture sits mainly in the row-3 / row-4 range of abstraction – the interplay of ‘logical-to-physical’ – with occasional forays up into the row-2 world of big-picture business-strategy: 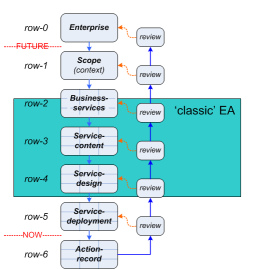 What I’m mostly working with, though, tends to be a fair bit further up the ladder: 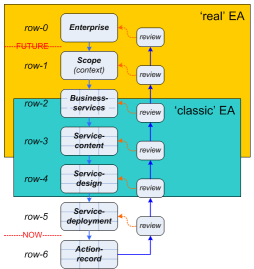 Yet it is still enterprise-architecture, because it’s still the same ladder of ‘why’. But with a lot more focus on more abstract-seeming questions about the nature of the enterprise, or even the nature of enterprise itself.

Unlike the feudal mess, ‘higher’ doesn’t equate with ‘better’ here: it’s just a different kind of view, on the same continuum. In the overall scheme of things, it’s ‘just another service‘, nothing special as such. But still useful, of course, if used in the right way. Which is what I want to do: be useful, in the right way.

That more abstract view might sound, well, more abstract, y’know? Impractical an’ all that? Yet actually it’s very practical indeed: and if we turn our perspective of the ladder the other way round, with the lowest-number rows at the bottom, what that ‘abstract’ view actually describes is the bedrock on which everything else in the enterprise will stand. For example, all that ‘abstract’ stuff on vision and values:

Seems a bit abstract at first, yes, maybe so. But trivial, or irrelevant? – definitely not. Not if you want to be able to ride the upcoming tsunamis of change, anyway.

(And yes, that is ‘tsunamis‘. Plural. Many of them. Lots. Perhaps a fair bit more than just a metaphor, too. Coming to a business-context near you, some day real soon now. If not today, in fact… And yeah, don’t expect to survive that little lot without some serious preparation before they hit… Your choice, of course? 😐 )

Sounds good? Wish it were so… because there is, of course, a catch – for me, anyway. A little practical problem called income. Or, more precisely, the lack thereof… in fact, in the not-income stakes, it’s pretty close to a perfect storm. For a start, monetisation happens mainly at the moment of ‘now’ – the row-5/row-6 boundary. In other words, the exact opposite end of the ‘why’-ladder to that where I usually work. Oops…

And just to make this part of my economic-life even more fun, although there’s a huge need for this aspect of the kind of work that I do – as can be evidenced by about five-minutes’ worth of looking-around at just about any large organisation – there’s an even more huge ‘anti-want‘ for it. Most of what I show people may be extremely important to them, but at first it’ll often seem embarrassing, challenging, or even downright scary. Oops again…

In short, it’s difficult to explain the immediate value of much of what I do, and most people really don’t want to know anyway, no matter how important it may be to their livelihoods and suchlike. Sigh… Oh well. But this is a fundamental part of everything that I do, so just need some other way to make some kind of income, that’s all. No big deal, really.

That’s about it, I guess.

Oh yes, one other point, about tools and toolsets.

Most of the existing ‘enterprise’-architecture toolsets are… well, let’s be polite and say ‘somewhat challenged’? …when it comes to working across the whole of the real EA continuum, and perhaps especially in terms of creating linkages up into row-2 and above. Most toolsets – and, even more, most notations – are all but unusably constrained for that kind of purpose: most of them sit either in row-3 or row-4, often without being able even to link across that architecturally-essential boundary. Yes, of course there are workarounds and kludges: but that really is all that they are, and just about everyone in ‘the trade’ knows that, too. We need a better solution than this.

So here’s the challenge: to handle the whole of the ‘Why’ question – and, going the other way, the ‘How’ and ‘With-What’ and so on – we must be able to build complete derivation/realisation chains for anything, from row-6 (records of past action) or row-5 (CMDB and the like) all the way back up to row-0 (vision and values) and row-00 (context of all enterprises). Yeah, it’s huge – no question about that. It’s probable there’s no way any single notation would be able to do it, and still make sense. But I do believe that we should be able to define a single metamodel that covers that space and can bridge across any type of notation, and from previous experiments here it really does not look all that hard to do. So I reckon that the the first toolset-vendor that cracks that challenge, and the attendant usability challenge that goes with, stands to open up an absolutely huge new market for sensemaking / decisionmaking tools, and would have much of that market to themselves for quite a while, too. So if you want to know more about that? – and how we can talk business about that? – well, you know where to find me, don’t you? 🙂

2 Comments on “The no-plan Plan: the ‘why’ of architecture”