The no-plan Plan: architecture for change

And more on that expansion on my ‘no-plan Plan‘, which does seem to be morphing somewhat into a kind of ‘manifesto for whole-enterprise architecture’… Anyway, this part is about that theme of ‘architecture as change’ – though perhaps ‘architecture for change’ might be a better way to put it..

[Obviously this is related to the next theme, on architectural dynamics. Yet they’re also kind of orthogonal to each other: the dynamics are more about the ways in which the architecture itself will change over time, whereas here it’s more about change itself – the nature of change, and how we work with it rather than against it. Both views seem equally important in this developing approach to enterprise-architectures.]

I’m going to start this one with a graphic of what I’ve termed a tetradian – four distinct axes or ‘dimensions’ in a kind of tetrahedral relationship:

I won’t go into detail here (“hooray”, you say? 🙂 ), but the quick summary is that the four axes for the tetradian are kind-of real-world analogues of the classic Four Elements:

It may sound a bit abstract at first, but it’s proved valuable in practice – for example, as a nice tangible metaphor to help explain to a group of logistics-executives how processes could be implemented in different ways, what the respective emphases were in each case, and also the limitations of an over-focus on IT (‘conceptual’-dimension) over everything else: 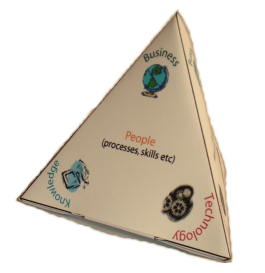 Another important twist – literally! – was that that ‘pyramid’ showed why it’s so important to rotate attention between the different dimensions: each face of the pyramid shows the relationships between three of the dimensions, but we have to rotate it to get a proper picture of the whole. In effect, that rotation – that movement – becomes a kind of fifth-dimension within that space: sometimes called ‘disorder’, but in classical terms a fifth-element, a ‘quintessence’.

(Which, yes, I know, has brought us back to the abstract again, but bear with me for a moment, okay? 🙂 )

So, let’s go back to another well-known cross-map, between those four-and-a-bit dimensions and the SCCC categorisation, where the ‘and-a-bit’ dimension is how we move between the other dimensions or domains:

And link that back to the tetradian:

Now let’s flatten the whole thing out, with the ‘and-a-bit’ dimension in the middle, to keep reminding us that it’s not static, and that we need to move between the dimensions as much as explore within them:

The visible parallel with A Certain Well-Known Framework should be obvious to anyone who knows that particular framework – a fact that has gotten me into a lot of largely-unwarranted strife from certain directions over the past few years. Sigh… Oh well.

Yet there’s also a very important point that comes up in a slide by Dave Snowden, in an online seminar on sense-making and complexity-theory a couple of years of back:

He’s right, of course. There’s a clear S-curve for the adoption and eventual acknowledgement of the limitations of Taylor’s ‘scientific management’ and the like – which focussed primarily on the physical dimension of time and motion, the relatively-Simple rule-based aspects of work and process. And there’s another clear S-curve for ‘hard-systems theory’ – whose primary emphasis is on data and calculation and Complicated feedback-algorithms, the conceptual dimension of work and process. And then, as Snowden shows us, there’s the start of what looks like another exactly-matching S-curve, for the more Complex, emergent aspects that emphasise sense-making in the relational dimension of work and process.

The diagram suggests that we could stop at that point, and that what it really shows is that sense-making via complexity-science is the ultimate ‘The Answer’ in the business context. I won’t question anyone’s views on that: but what I will say is that, if we follow the logic of that sequence of S-curves, combined with even the briefest of glances at that flattened-out tetradian further above, we come to a rather strong hint that there might be a bit more to this story – and a very useful ‘a bit more’, too:

In other words, seems likely that there’s at least another whole dimension to explore there: the aspirational dimension, which maps above to the so-called Chaotic domain and to principle-based sensemaking and decisionmaking. And, of course, there’s that sort-of-dimension in the middle, about how we move between the various sensemaking / decisionmaking domains, according to the needs of the context.

To bring it out of the abstract somewhat, let’s use the metaphor of a mediaeval market, where we can hear and see and sense all of those themes interweaving within the bizarreness of the bazaar:

“Yeah, mate, good to see ya, d’ya wanna try some of these, new they are, special to you, only two groats to the bushel? An’ you heard the news from up the manor-house? – you reckon joinin’ up with them’s gonna change a few things round here, what with the new flag an’ all?”

If we tease apart some of those tangled-up threads, we’d end up with something that looks like this:

There’s a definite structure and sequence to this, too – what I call the market model and market-cycle:

Classic ‘scientific management’ works well with the ‘operations bit’ – the transactions. Hard-systems theory works well with identifying appropriate tactics in the planning-stage. We need complexity-theory and so on to help us work with the emergent strategic patterns out of the broader market. But as yet we don’t seem to have much – certainly in the sense of formal theory and the like – to work with the Black Swan opportunities and very-real kurtosis-risks that are further out, often beyond the nominal market itself, in the deeper shared-enterprise space from where trust and respect arise and fall. And we also don’t have much on how to work with change, with inherent-certainty – rather than futilely trying to fight against it, as business-as-usual so often tries (and fails) to do.

Conventional analytic ‘science’ won’t be much help here, because unique events are, well, unique: it’s all unorder, there’s no repetition for Simple rules or Complicated algorithms, not even enough repetition upon which we could project some Complex pattern. We’re beyond (or outside, or something) from all of that here. And yet we know it does work… somehow…

So how do we work with that Chaotic domain? Running away and asserting that it doesn’t exist other than as a source for emergence – as certain people still purport – doesn’t seem much of an answer to me: not a useful answer, anyway. More useful, perhaps, might be some of the various Agile disciplines – they look like they would have more than a few hints for us there. We know that principles and vision and values do work well here, to provide a kind of ‘guiding star’ amidst the murky chaos of the moment. Likewise there’s what I often describe as the real-time realm of the ‘business-anarchist‘: unlike analysis, it doesn’t waste time looking for rules that it already knows by definition cannot be there. But all of that is only a start: seems likely there’s a whole new discipline – maybe even a whole new science-beyond-science – waiting for all of us to explore. Interesting times indeed… 🙂

And beyond that, there’s that ‘fifth-dimension’ discipline – the true quintessence of architecture, perhaps? – about how we move between those different domains. Despite their depiction in that diagram, those S-curves don’t tell us that the respective discipline is dead and gone: far from it, in most cases. What it does tell us is that, once the hype has died down, we come to recognise that that discipline is not the longed-for final ‘The Answer To Life, The Universe, Everything’ – a fact that anyone with even an iota of sense should have known from the start… And once we get past that initial illusion, it can start to settle down into doing something useful.

I’ve made a few tentative explorations for this over the past few years – such as the cross-maps associated with the SEMPER diagnostic, and the how-to-move-between-disciplines ‘cheat-sheet‘ from the book Disciplines of Dowsing. But there’s a lot more to learn, a lot more to explore – and a lot more on how to adapt it to the enterprise-architecture contexts, too. Again, some interesting challenges, to say the least – and no doubt some ‘Interesting Times’, too? 😐

Anyway, stop there for now: over to you?