“Let’s do a quick SCAN on this”

What’s a quick way to start making sense of some context? – fast enough to help in making good decisions fast, too?

If you’ve been watching this blog or any of my other writing, you’ll know I’ve been working on this one for years, worrying at it like a dog with a bone. My first books were actually about a variant of this, three decades and more ago. In recent years, mostly for enterprise-architecture, I’ve developed or re-used a number of approaches: the tetradian dimensions, classic Five Elements, context-space mapping, all the different themes that came together for Enterprise Canvas, and much more.

What’s really needed is some sensemaking-structure that’s quick, simple, snappy, that’s as easy to grasp, and as ubiquitous in use, as something like SWOT.

And I think I may have found one, with this:

It’s a form of sensemaking that actually comes down to two very quick questions:

Visually, this gives us a simple sort-of-two-axis-framework that looks like this: 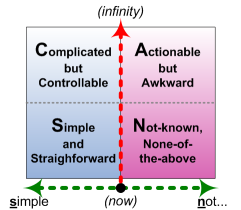 [You could use the plus-or-minus symbol ± as a quick scrawl for this – particularly as it’s both visually-descriptive and gives that sense of uncertainty yet sorting things out, “plus-or-minus a bit, here or there…”.]

And you choose what each of those domains will mean. It’s your context, hence your choice: intentionally, there are no preset ‘special definitions’ here.

Looking at anything in that space, is it Simple, Straightforward, makes Sense; or Not-known, Not-sure, Not-certain, a kind of niggling ‘None-of-the-above’? That’s our horizontal-axis: a simple sort into what we already know how to handle, and what we don’t; what we’re certain about (for now, at any rate), and what we’re not.

If there’s no time at all to make sense, but we’re dealing with something that doesn’t make sense, that’s what we’d do: split it straight away into the stuff that that we know, and the stuff that we don’t, and then get on with it straight away with the bits that we can do. The important part is to not throw the ‘stuff-that-we-don’t-know’ into the too-hard basket: instead, we keep it to one side, clearly labelled ‘None-of-the-above’.

When we do have time – our vertical-axis here – we apply the same test, but stretch it out a bit. Think of it as the Blu-Tack® school of sensemaking, perhaps, because we always start with this sticky blob called ‘Not-known’ or ‘None-of-the-above’. Or perhaps like stretching pizza-dough. Anyway, what we’re doing is stretching that ‘None-of-the-above’ out into four rather more distinct domains:

— Is it Simple and Straightforward? – we know what to do, and we can do it fast, with simple rules or simple guidelines.

[In practice, this means that we could probably do it with what we already have, or with something that we can buy off the shelf or train people to do in a couple of days or so. Keep it simple, keep it cheap, keep it working: that’s what we’d expect here – or aim for, at any rate.]

— Is it Complicated but still Controllable? – it might take us a bit of analysis and an algorithm or two, but we’re certain we can make it into a predictable, predefined, packageable process. One of the keys here is that it’d be ‘fit-and-forget’: once we’ve solved it, it stays solved.

[This’ll likely take some significant time, and possibly some serious costs, but importantly it’d be a once-off investment: once this kind of problem is solved, we shouldn’t need to do it again. We hope…]

— Is it Actionable but Awkward, always a bit Amorphous and self-Adapting, sometimes almost an ‘Anything-goes’? – we know how to do it, but we have to watch for patterns, textures, trends, work with experimentation and emergence. It’s always similar, or sort-of-similar, but we can never be certain that it’ll be the same. Typically anything that involves working with real people, or anything that connects directly with the real-world, is going to have at least some of this. The key difference from the Complicated is that we can’t solve it as such, we have to keep ‘re-solving‘ it, time after time.

[This is not going to be a once-off investment: we’re going to have to go through the same loops time after time, yet likely with subtle differences every time. Which means there’ll be an ongoing training effort, and ongoing costs. Which is fine, once we know it: what placing something here will do is help us accept that fact.]

— Is it still Not-known or None-of-the-above? – Not-sure, Not-certain, No-sense-yet, even No-idea or Not-a-clue…? The point is that all of those are fine: that’s what sensemaking is for, after all. Whenever any kind of unplanned-for-change happens, we’re always going to have a bit of this; likewise in innovation, where we’ll actually want to go into this space of ‘the unknown’. The crucial concern is that, rather than hiding these items away in the ‘too-hard basket’ and vainly hope that they’ll disappear on their own, this gives us a known place where we keep track of them, where we do acknowledge that they exist, and work on them as best we can.

[In practice, this is the realm of skill and experience – the troubleshooters and trailbreakers and mapmakers and make-it-up-as-we-go-along improvisers who work with the uncertainty and create new pathways that others can follow. People who can do this reliably and well are often hard to find, hard to grow, rarely come cheap, and rarely fit well with anyone else’s rules: so if this part of our business depends on this, we need to respect that fact, and plan accordingly.]

Note that we always end up with some of what’s going on still in the Not-known area: it gives us something to go back to later, if you like.

And we can also apply the same SCAN on each of the areas that we’ve found, separating those out into their own Simple, Complicated, Awkward and still-Not-known. May well be some interesting surprises there, too – sometimes useful surprises as well.

What we do with this depends on the business, and the context. Scientists would classically aim to follow a path from idea to hypothesis to theory to law, which in effect is None-of-the-above (a new idea) to Awkward (an uncertain hypothesis) to Controllable (a more certain theory) to Simple (a ‘scientific law’). Many businesses will want to push to make everything as Simple as possible too, because that’s often where the profit is mostly easily made. But others – an advertising-agency, for example – will often want to explore out in the idea-space of ‘None-of-the-above’; and one person’s Simple might well be another’s confusingly-Complicated that would collapse in chaos whenever time runs short. In other words, it all depends on what the needs might be; and those, in part, are what we aim to find out here.

So this isn’t a fixed ‘one framework fits all’: it’s much more fluid than that, more adaptable to the way that real people work in real business contexts. The aim here is that this gives us a quick, simple, straightforward way to get started, to make sense and map out what’s happening, and hence make quick choices that do make sense in practice.

There’s a lot more to this, of course, and a lot more ways we can use this, as I’ll explore in subsequent posts on this. But for now, that’s it – all we need for basic sensemaking in business is to start with the question:

Comments or questions, anyone?

[Note: In case anyone’s wondering where this comes from, its real roots are a sort-of Jungian model I described in the chapter ‘Can’t we explain this scientifically?’ in my book Inventing Reality, first published way back in 1986. Perhaps take a look at the original text: it may amuse. Or something. 🙂 ]