I was reminded of this by an excellent post on the Psychology Today website, by Pamela Rutledge: Social Networks: What Maslow Misses. She makes the point that none of the ‘levels’ in the ‘hierarchy’ make much sense without an understanding of the role of social connection: this has significant implications for social-media, and hence enterprise-architecture. She redraws the ‘hierarchy’ as a circle/cross-format, an ring of relationships between the nominal ‘levels’, with ‘Connection’ at the centre. In other words, a flattened-out tetradian-like layout, portraying a set of independent yet interdependent dimensions.

I don’t know why people are so enamoured of hierarchies and simple ‘stack’-type structures, but the reality is that it rarely works that way in practice. Take Maslow’s Hierarchy, for example: the Abraham Maslow website shows us this graphic: 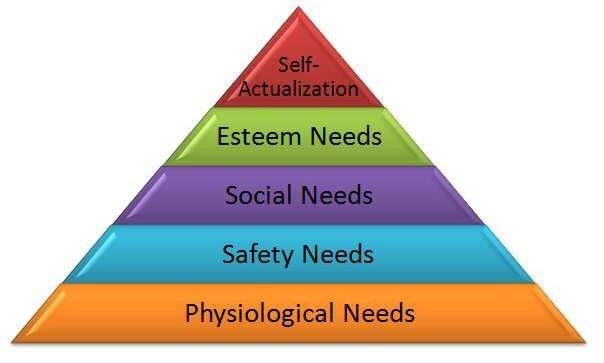 But it’s a classic example of that adage about “For every complex problem, there’s a clear, simple, easy-to-understand wrong answer” – because the reality is just not that simple. For example, from first-hand experience about survival in a concentration-camp, psychologist Viktor Frankl explains:

Spiritual life strengthened the prisoner, helped him adapt, and thereby improved his chances of survival.

In that extreme context, the ‘hierarchy’ is inverted: survival depends first on ‘self-actualisation’, without which there is loss of access to any of the other ‘levels’.

I’ve long seen exactly the same about the Spiral Dynamics model. Spiral was derived (some might say ‘mutilated’…) from the work of Clare Graves [no relation], a contemporary and colleague of Maslow.

[And, apparently, a very close colleague at times – so much so that apparently Maslow’s later versions of his ‘hierarchy’ do draw strongly on Graves’ work.]

The Spiral model is invariably shown as a linear progression, each ‘level’ able to incorporate and extend the capabilities of each of the levels beneath:

(The original Graves letter-codes are just-visible here on either side  of each ‘level’-colour – individual on the left, collective to the right.)

But again, the reality is quite different. In most ‘traditional’ societies we simply don’t see the supposed characteristics of the Red, Blue, Orange or even Green layers – but we do see key instances of the systemic views that are supposedly characteristic only of the ‘higher’ Yellow and Turquoise layers. As I’ve said in other posts, it makes much more sense to think of Spiral not as a simple linear ‘stack’, but as a set of intersecting dimensions.

A key reason why we don’t see much of Spiral’s mid-‘levels’ in ‘traditional’ societies is that those types of characteristics only become relevant in larger, denser social contexts, with greater complexities arising from multiple-order Dunbar-Number social-connectivity.

For example, the Green ‘level’ still needs an ‘Other’-group – a ‘Them’ – to carry the blame for everything; it’s only in a systemic-viewpoint (Yellow or ‘above’) that there is awareness that in practice there is only ‘Us’. Yet within a small grouping, there’s simply not enough separation to create much of a meaningful distinction between ‘Us’ and ‘Them’: hence the apparent Spiral ‘stack’ is compressed to just Beige (survival-individual), Purple (family – survival-collective), Yellow (systemic-individual) and Turquoise (systemic-collective), because the supposedly-intervening ‘levels’ simply aren’t relevant in that context. Thinking in terms of dimensions rather than ‘levels’ makes this point much easier to understand.

In Clare Graves’ original work, societies and individuals ‘move around’ within the ‘stack’ – which, again, makes more sense in terms of dimensions, because each change is usually an adjustment of intensity or focus along one dimension at a time. A key complication – which is often missed by Spiral aficionados – is that whilst individuals may place themselves anywhere, they’re likely to find themselves in significant social difficulty if their ‘position’ is more than about half a ‘step’ away from that of the mainstream culture in which they live. In practice we often see people simulating a ‘position’ that they don’t actually hold at all: and the tension of maintaining that ‘non-natural’ simulation can cause significant damage – a point that, as Scott Adams’ Dilbert cartoons document so well, definitely applies to ‘survival-tactics’ in overly-bureaucratic organisations…

Another huge danger with any linear-progression model is that it can be used to prop up delusions of ‘superiority’, and hence assertions of ‘right’ to priority or privilege. The problem is particularly severe with Spiral Dynamics, where ‘higher’ is all too easily conflated with ‘better’.

[As summarised on the Wikipedia page, Chris Cowan seems acutely aware of this danger; Don Beck and his co-‘Integral’ partner Ken Wilber don’t seem to be aware of it at all, and even seem to encourage it, which is not a good idea…]

Shifting perspective from a linear progression to an intersecting of dimensions helps us to break free of this trap – which again can be extremely important in a business context.

So Maslow’s Hierarchy isn’t a hierarchy; Spiral Dynamics isn’t a spiral: those are just the largely-illusory outcomes of viewing a complex set of intersecting dimensions from a single arbitrarily-selected viewpoint. Once we move away from that fixed view, some very interesting implications can arise, along with some very interesting possibilities and options.

Over to you, anyway – comments, anyone?