This one is a pick-up from a Tweet by Bert van Lamoen:

Of course. Yes. That’s obvious, the moment I look at it.

Except that I’d completely missed before now.

[The set of five dimensions that I’ve used to summarise effectiveness, if you’re interested, is efficient, reliable, elegant, appropriate, integrated – see  the slidedeck ‘What is effectiveness?‘ or my book SEMPER & SCORE: enhancing enterprise effectiveness.]

Yet that type of ‘effectiveness’ assumes that there’s some kind of pre-ordained plan – ‘effective in terms of the plan’. What if there isn’t a plan? What if we don’t know what the plan is? What if we’ll only know what the plan was – or sort-of ‘was’ – once we’ve completed it? (‘Retrospective causality’, as a certain person would put it.)

That’s where co-creativity comes into the picture. Co-creating a ‘plan that is no-plan‘, together.

And that’s what I’d missed.

[I can see why I’d missed it: to be blunt, I’m, uh, not good at anything that involves being social, and the whole point and focus of co-creativity is that it’s social. But it still doesn’t excuse the fact that I shouldn’t have missed it. Sigh.]

Yet I’m not the only one who’s missed it: there’s a whole societal shift implied here – a completely different way of working. One that doesn’t assume that there’s ‘The Plan’. One that doesn’t assume that there’s The Person In Control, or The Person Who Knows What’s Going On. Or even that there’s anyone who knows what’s going on. Instead, there’s a trust that co-creation will take us where we want to go: an effectiveness that’s an emergent property of the collective, without any ‘plan’ or pre-certainty at all.

I don’t see this as an ‘either/or’ – either effectiveness-relative-to-a-plan, or co-creation-with-no-plan. It’s more a ‘both/and’ – it seems more an effectiveness that arises from a sort-of plan-that-is-no-plan, one that covers the entirety of the SCAN decision-making space: 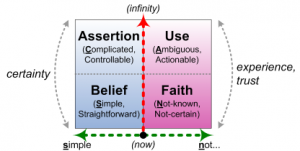 The classic ‘efficiency’-based approach is mostly about the left-hand side: assertions about ‘the true metrics’ and so on leads to The Plan which leads to control of actions and decisions at real-time – the Belief ‘domain’. It’s very mechanical – often literally so.

Looking at it now, the approach I’d taken to effectiveness did incorporate a lot more of the right-hand side, with a strong acceptance of various aspects of uncertainty – particularly in the human space, the ‘elegant’-dimension of effectiveness. But it still presumes a plan, an Assertion – and hence that’s where it naturally tends to return.

Co-creativity would seem to focus more on the ‘Use’-domain – literally, “What’s the Use?”. I believe that to work well – to avoid a collapse into a dysfunctional-chaotic free-for-all, a ‘co-non-creation’ – it’d still need some kind of guiding-light or anchor or direction, a shared “What’s the purpose here?”. Yet even that would likely be co-created too – a nice recursion there.

Hmm… A lot to think about. Or, preferably, co-create? Thanks anyway, Bert! 🙂