Enterprise as story: a cafe example

How can we use a vision or story as the anchor for an organisation’s business and enterprise? How do we link that story to decisions and actions in everyday business?

This is a theme that came up in a great conversation a couple of days ago with the proprietor of a relatively new cafe in town, Caffe Sala, on Eld Lane in Colchester. 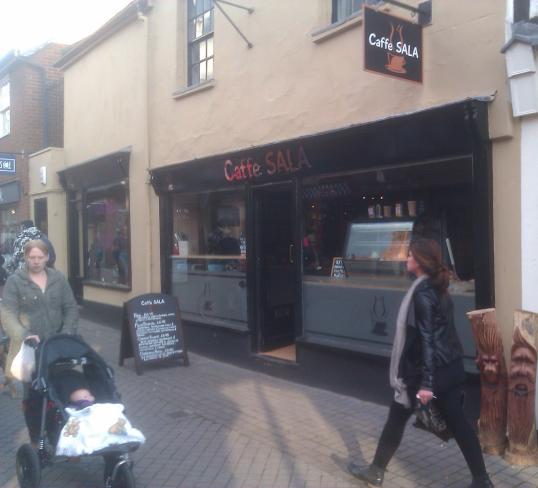 She’d started, she said, from a very simple idea, based on her personal experience: she wanted to create the kind of cafe that she’d so much needed when she was a full-time mother with two small children.

And that’s the core of this enterprise-story: a cafe that’s more than just ‘family-friendly’, it’s ‘small-child friendly’ as well.

Which is a big difference. Somewhat older children will ‘behave’, ‘be nice’ and all the rest of it. Two-year-olds won’t: they’re inquisitive, they wander, they pull at things, spill things, break things, they have incomprehensible conversations with strangers, they fight, they scream, and they cry. Lots. All at the same time, sometimes. Oh joys… But that is what small children are, and do – and we need to design for that fact, not pretend that it doesn’t exist.

Going shopping with two or three pre-school children in tow is darned hard work at the best of times. And finding somewhere safe to hide and, if at all possible, recover and relax with a fractious child would be described as a ‘godsend’ by almost any overstressed parent. But try finding anything like that in most town-centres or shopping-malls? Fat chance, frankly. 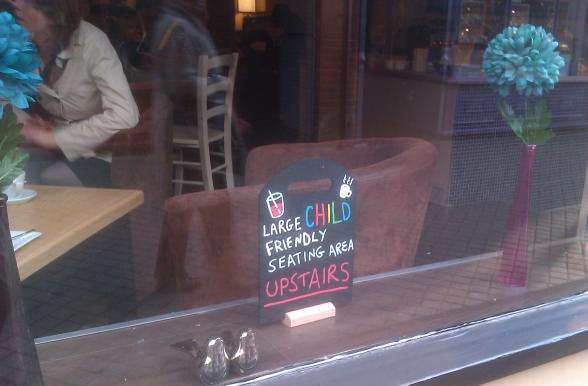 And that’s what they’ve done at Caffe Sala. They started with just that one idea – that so-human story – and built outward from there.

Eld Lane is a small pedestrian-only street on the outer edge of the central shopping area here – in fact the shops and houses on that side of the street are built on top of the old Roman wall that runs right around the town. The cafe itself is inside two of the old small shops that have knocked-together at some point in the past; downstairs is a fairly open space, like most any other cafe in town, but upstairs is still divided off into the original small rooms – which make a perfect semi-private space for retreat from the world.

One of those upper rooms seems to have already become a favourite haunt of students; the others have been explicitly set aside as a safe-haven for babies, toddlers and pre-schoolers. (And their parents, of course. 🙂 ) That whole section is covered with easy-clean flooring, on the certain expectation that children will spill food on it, or worse; it’s sort-of isolated from the rest of the upstairs by a small two-step drop, making the whole space a kind of sunken area that makes it less likely for crawl-age children to wander off. And there’s a safety-gate across the entrance-way, anyway, so even toddlers won’t get out unawares.

There’s a kind of outer vestibule to that upstairs area, with armchairs and a coffee-table, and also the toilet (with built-in baby-changing table, of course). The two small inner rooms are large enough to hold at least a couple of standard-sized cafe-tables each, plus all the chairs that go with them – including high-chairs for toddlers. And mounted on the walls, at child-height, just below the windows, there are wooden puzzles and drawing-frames – things for children to explore.

The separation between the rooms is important, too. While I was there – trying to get some work done on a much-procrastinated presentation! – there were two mothers in the other room, each feeding a baby. In the meantime their toddler kept wandering back and forth between the two rooms, wanting to explore on his own, wanting to see what I was doing,  wanting to to try out the different toys in this room, and so on, whilst still being able to retreat back to the safe space of mother’s company whenever he wanted. It’s exactly the kind of ‘opportunity-rich’ yet safe exploratory-space that Mary Sheridan recommended for young children, when I worked as her illustrator way back in the late 1960s and early 1970s.

For example, if you’re going to make this a place that’s parent-friendly, it’s probably best to have a building that is already parent-friendly in a physical sense in the first place – which actually this isn’t. It’s an old building knocked-together out of two even older buildings in an old part of an old town: hence no great surprise that it has awkward steps, odd corners, the most useful rooms hidden away upstairs, and so on. But by keeping the focus on “this is a place for small children”, it’s possible to design around those challenges, and emphasise the orientation towards. To give just one example of the kind of design-details that matter, small children means prams: so one area of the lower floor – visible from outside – is set aside as a pram-park. In this old town, parents are used to fighting with awkward steps and suchlike – but that obvious pram-park makes a very big difference to the ‘desirability’ of the cafe-space.

And the fact that it is slightly off from the main ‘modern’ shopping-area, yet in and close to the popular pedestrian-area with its array of ever-interesting small shops, means that it’s probably the best location in town for this kind of cafe. It’s not on the High Street, competing with McDonalds and the like; it’s not in the main shopping-mall, usually crowded with students or younger girls going clothes-shopping; but it does still get a lot of passing-trade, of whom a very large proportion are overstressed parents with prams. And although it’s an old area of town, it’s also still somewhat upmarket: hence a place for people who do have spare cash to spend on coffee and cake. In other words, almost the perfect match between location, value-proposition and key customer-segments – because it’s what’s implied by the enterprise-story.

Other details come out of the enterprise-story, too. Downstairs it’s essentially a straightforward cafe, but with lots of nice private corners – enough to make a value-proposition difference, anyway. But it’s the ‘child-friendly’ focus that really does drive it. The proprietor told me that she wanted the walls in those rooms upstairs to be covered with children’s art, changing over time: she was going to add a drawing-easel in the vestibule-space to make this easier to create. I suggested also that she build up a kind of rotating toy-bank in those two rooms: parents bring in toys that their children have outgrown, and toddlers can play with them there, but also take them away if they want to – without the usual screaming fights that happen otherwise when a child becomes too possessive. In other words, leverage the networks of mutual-support and mutual-obligation that arise when people are encouraged to take on some space or place as ‘their own’.

It’s still early days there – they’ve only been open a few weeks so far – but it looks like they’re doing well already, and they’re constantly trying out and testing new ideas in classic Agile style.

I’ll be watching this one with interest, anyway: I’ll probably report back again in another blog-post in a few months’ time. But in the meantime, a really useful illustration of how enterprise-architecture ideas can play out in business-design even at that small a scale: and a lot of really valuable lessons to learn about what works and what doesn’t, that we can definitely apply in other forms elsewhere.

Best stop there for now, though: comments, anyone?

7 Comments on “Enterprise as story: a cafe example”