That’s a large part of what I do, I guess – planting trees, metaphorical and literal.

Well, perhaps the best reason for doing so is in a lovely tale I came across the other day. One of the Oxford colleges was having to face the fact that the ancient timbers holding up the roof of their great hall were fast approaching a point beyond which no amount of conservation-work would hold them together: they’d have to be replaced. But they were more than four hundred years old: where on earth – literally – would they be able to find any equivalent trees for the timber they’d need? After much worry, the conservators finally got round to asking the college’s own head-forester for advice. “Ah, we’d wondered when you’d be coming round here for those”, he said. “When our foresters from the old Elizabeth’s time cut down the oaks for those beams of yours, they planted their replacements too. They’ve been maturing nicely over the past century or two: I’d say they’re about the right size for you now. When did you say you’ll need them, ready for the builders to use? We’ll have them ready for you by then.” And before the conservators could get over their shock and relief, the forester quietly added, “We’ll plant their replacements at the same time, of course.”

Yet there’s also a deeper ‘why’ beyond the merely pragmatic. I was reminded of this again today whilst re-reading an old favourite, the book-version of Jean Giono’s short-story The Man Who Planted Trees – which in turn sent me to Frederick Back’s beautiful Oscar-winning animation of that same story. Planting trees – both literal and metaphoric – creates the possibilities for a better future, for everyone.

And yes, that was one of the real inspirations for all of that effort of mine, so far away now in both time and space. For quite a while – several years – I literally planted trees, all round the block and house where I used to live in central Victoria, about 100 kilometres north-west of Melbourne in Australia. It was almost completely bare when I moved there – hence pretty much everything living that you can see on the upper half of the Google Maps image below, I planted that. 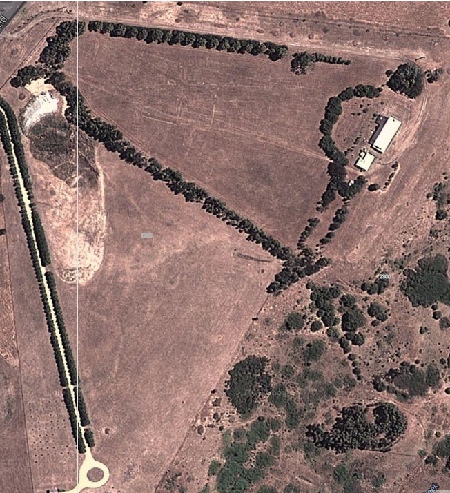 I planted the avenues down the driveway and the southern fence-line; the shelter-belts around the house and across the road-frontage, to keep the winds at bay; the fruit-trees in the garden. I even planted quite a large labyrinth – 50 metres by 70 metres – down on the lower part of the steep slope down towards the lake – that’s the kind of snail-shell of trees down in the lower right of the picture. Some three thousand trees and shrubs in all: all done by hand, all watered by hand every day at first, day after day after day, in one of the worst droughts there so far this century.

But yeah, it’s pretty heartbreaking when the kangaroos smash the tree-guards down and the rabbits eat the rest; it’s pretty heartbreaking, too, to discover the hard way that an entire planting of one species of tree, billed as frost-resistant, isn’t. And it doesn’t help when some young hoon in a stolen car overshoots the junction at the top of the road, ploughing through two layers of fencing and three lines of young trees before the car comes to a halt and he runs away, with the engine still running…

There’s a very good reason why this kind of thing is known as ‘a labour of love’: it’s a long, hard slog, with serious expense in money and time and effort, and with nothing much to show for it for a long long time. Most of the real growth didn’t start happening until the rains came back, nigh on a decade after I’d started. Yet despite all of those hardships and traumas, the trees are at last getting somewhere – at least, as shown on Google Street View from probably a couple of years ago:

But here’s the twist: I don’t get any supposed ‘benefit’ from having done all of that work. Not now, anyway. I sold the place more than seven years ago: and those trees didn’t even register as the smallest blip on the ‘valuation’ of the property, of course. Someone else now has all of the benefit from everything that I did back then.

Fact is that people who plant trees rarely do see much direct benefit from all of their hard work. And it doesn’t matter. Or actually, it does: it matters that the work was done, otherwise those trees would not be there now, providing all of those many services that trees do.

People who see only the ‘now’ want everything now. That’s pretty much a description of our entire so-called ‘economy’, in fact. Yet not everything happens all at once: some things do take time to come to fruition, whether we like it or not. And in many cases, yes, the time-to-fruition really is measured not in days, but in decades, or more.

Most people, it seems, look only to the harvest right now, and don’t think of what has to happen before that harvest can exist.

In the meantime, yes, some people do think about what will be needed to make that future happen – and take action in the now, to make the future possible at that future time. (And that work, somehow, has to be paid for in ‘the now’, too… – otherwise that future won’t happen…)

Futurists are foresters: they plant trees, and nurture them.

Sometimes those ‘trees’ may be a bit more metaphorical – planting ideas, tools, ways of thinking – but trees nonetheless: trees that take time to grow, many years of quiet, tender, often-unrewarding, often-heartbreaking care, so as to be ripe and ready for the harvest when their time comes.

The best time to plant a tree is twenty years ago.

If we can’t do that – go back in time to do that – then the next-best time is now.

Planting trees of all kinds – metaphoric and literal – for a better future, for everyone.