Is culture essentially chaotic? Or is it a complex adaptive system? So asks Stephen Bounds in his post ‘Chaos, complexity and CASes‘ – itself a response to William Powell’s ‘Culture is chaotic‘.

Both posts are well worth a read, and seems to me that there are good points all round. I do kinda suspect, though, that the core of the clash might be primarily a definitional issue – and perhaps a bit more as well.

I’ve written quite a bit on this blog on chaos in relation to enterprise-architectures, such as in the posts:

The real catch, perhaps, is that ‘chaos’ or ‘chaotic’ has a whole range of different meanings, some of which conflict with the others. I’ve explored this in some depth in the ‘On chaos in enterprise-architecture’ post, with an emphasis on four distinct forms of chaos:

The fundamental here is that chaos is about the unique, about inherent-uncertainty – especially in real-time contexts in the real-world. Some aspects of the world are (relatively) predictable; yet many are not, and it’s the requirement to deal with that reality that drives much of my own work in enterprise-architecture and the like.

The ‘odd-one-out’ amongst those definitions is the last one – the Wikipedia version of ‘chaos theory‘ that Stephen quotes, the one about chaos as “a branch of mathematics” dependent on criticality of initial-conditions. The catch is that that type of definition tends to imply that all ‘chaos’ is ultimately deterministic – even if only in a mathematical sense, reduceable to an equation. In a way, it’s a definition at high risk of being (mis)used as a ‘term-hijack’, a tiny subset of ‘chaos’ masquerading as the whole – in much the same sense as IT-centric ‘enterprise’-architecture purports to be the whole of the architecture of the enterprise.

All of the other definitions of chaos focus on true uniqueness, true randomness and/or overload – such as in the historical origins of the word ‘panic’. Rather than merely the criticality of initial conditions, a more real chaos is critical to all conditions – kind of like resetting the ‘initial conditions’ of chaos-mathematics at every single moment, rather than solely once at the start.

Complexity-theory tends to focus on non-linearity, which in turn implies that there is some kind of connection to start with – such as in the classic double-pendulum example. Instead, what we’re seeing in key types of chaos is alinearity – no connection, other than some form of literal co-incidence (often that which we choose to perceive and act ‘upon’). The medical example I keep returning to here is Hickam’s Dictum  , that ‘patients can have as many diseases as they damn well pleases’ – the only ‘connection’ is the fact of co-incidence in the specific patients themselves.

Complexity is sometimes referred to as ‘the edge of chaos’. But I’d suggest that complexity’s roots – the metaphoric place that it returns to when in doubt – is in non-linearity: things that are and always remain connected, and non-random, even if in non-linear ways.

This is not the same as what we see in chaotic-systems, where there are all manner of random, and non-connected elements, whose only ‘connection’ is that they co-incide in some (perceived) way.

(See the section ‘The seeing eye’ in Cynthia Kurtz‘s work on her Confluence framework, for another view on this distinction.)

To me at least, ‘complex adaptive systems‘ kind of implies that connection is maintained throughout. The self-organisation of a non-purposive ecosystem fits that kind of definition well – the organisation is non-linear, but still driven by the direct connections between the elements. Another example is the kind of constrained self-organisation in a magnetic field: the connections do allow a certain amount of sort-of freedom, but it keeps pulling everything back into ‘alignment’ with the imposed organising-element. And we also see a very similar kind of self-organisation that happens under a dictatorship, or a classic Taylorist-style hierarchy  – the self-organisation of work-arounds to make something that doesn’t work seem in practice to sort-of work, without upsetting the supposed ‘organising force’.

By contrast, in what we might term ‘chaotic adaptive systems‘, there are all those random, and non-connected elements, whose only ‘connection’, again, is that they co-incide in some (perceived) way. There is a form of self-organisation here, but the ‘adaptive’ part is another type of element entirely, a kind of overlay onto that type of chaotic system, that acts not so much as an enforced organising element (e.g. magnetic field), as a focus-theme for elements to organise themselves around, in relation to each other, and that arises from the elements themselves – often continuously-renegotiated on the fly. In physical chaotic-system we see this kind of self-organisation in phenomena such as Brownian motion; in human chaotic-systems we see it in ‘leaderless’ organisation-models such as that at Valve, or in impro-theatre, where purpose does exist, as an ‘organising element’, yet is itself continually renegotiated and redefined in response – or even proactively – to chaotic ‘forces’ such as serendipity. 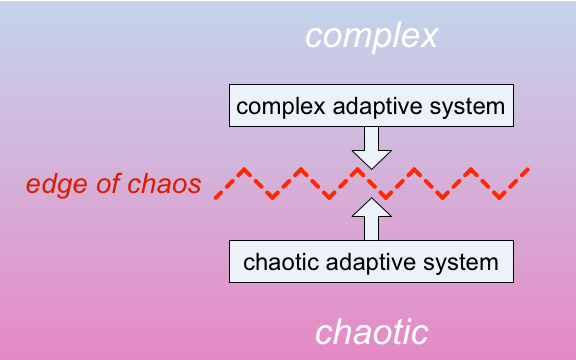 Rather than being ‘the same’, it’s more about which way we face when we stand at the point. Yet if we only allow ourselves to look one way – towards chaos, or towards complexity – then we can delude ourselves into thinking that they are the same, because both do coincide at that one specific yet highly-dynamic edge.

One of the problems in working with complex-systems is that it’s all too easy for events to be reinterpreted in hindsight as seemingly connected in a linear and ‘predictable’ fashion – a form of misinterpretation across the ‘complicated / complex’ boundary that a fair number of theorists have described as ‘retrospective causality‘. Increasingly, though, I’m beginning to wonder whether the same kind of misinterpretation occurs across ‘the edge of chaos’, the ‘complex / chaotic’ boundary – true-chaos reinterpreted in hindsight as ‘retrospective complexity‘. If so, might this suggest that we need to be every bit as wary of ‘complexity-centric’ interpretations of events, as much as we do already about Taylorist-style ‘complicated-centric’ interpretations?

Culture is simple; culture is complicated; culture is complex; culture is also chaotic, in the most literal sense of the term. All of them – all at the same time. It’s kinda important, though, that we don’t mix them up – especially when our aim is to make sense of adaptation and self-organisation in cultures.

Comments, anyone? – over to you.