“Form follows function” – that’s what we were always taught at design-school. Yet is that actually true? I wonder…

There was nothing in particular that triggered this one off: it was just one of those ‘first thing in the morning’ things, together with revisiting a previous post of mine, ‘Architecture is non-functional‘, and thinking about a couple of slides that need to go into my upcoming EA training-course about the old requirements-model distinctions between ‘functional’ versus ‘non-functional’.

[At this point I’d also best slip in my pre-emptive apologies to Gene Hughson, who writes an excellent blog entitled ‘Form Follows Function‘ – no slight or slur intended, honest! 🙂 ]

The classic assertion is this: that the function that a device or system or whatever is intended to perform, should guide the design, and the design in turn should reflect the function – hence the assertion that form follows function. A bicycle should look like a bicycle, something that rolls on two wheels along a road; a cigarette-lighter (okay, old-fashioned example, I know) should look like something that would light a cigarette; a phone should look like a phone; and so on. Hence, again, the user-interface for an IT-based application on screen or handheld should be kind of self-explanatory, easing the user-experience.

All well and good: yet what is it that determines the function? 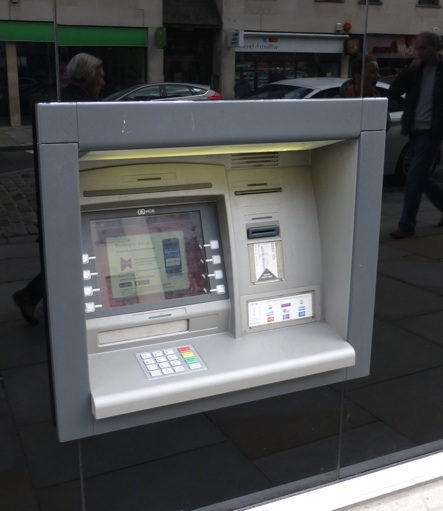 If form follows function, then what actually is the function here? The quick summary is that it’s not just one function, but a suite of easily-automatable bank-teller transactions – hence ATM, Automatic Teller Machine. There are obvious bank-oriented functions:

And it supports a few other transactions on behalf of partners:

There are also some maintenance functions which, of course, ordinary customers don’t and shouldn’t see.

That’s about it, really: all fairly straightforward.

To support those functions, we’re going to need the following:

So, what form should all of this take?

If form follows function, then every ATM should look exactly the same, pretty much without any variation.

Which is sort-of true – but only ‘sort-of’, because in practice just about every bank seems to have a different layout:

The function itself doesn’t tell us all that much about where these things have to go, and their physical relationships with each other.

Instead, it’s so-called non-functionals – often practical human concerns, and/or security concerns – that determine most about those physical relationships. Which, in turn, are well-illustrated in this case:

The most common variations on form and layout are with components where the non-functionals are not so critical, such as for the receipt-printer – it’s perhaps most often in the position shown in this example, above the card-reader, but I’ve seen it placed just about anywhere, relative to other components. And the internal components that drive all of this functionality, of course, can go just about anywhere that fits – subject to other non-functionals, such as temperature-management, inter-component interference, and accessibility for maintenance.

When we look at the unit as a whole, the same point applies. From a pure functional perspective, the physical position and mounting of the unit makes no difference at all: we could put it just about anywhere, as long as it can do its job, its function. It’s the non-functionals that ultimately determine exactly where it goes – such as:

That last point is particularly relevant in this case, as the unit is mounted unusually low on the wall, for use at wheelchair-accessible height: 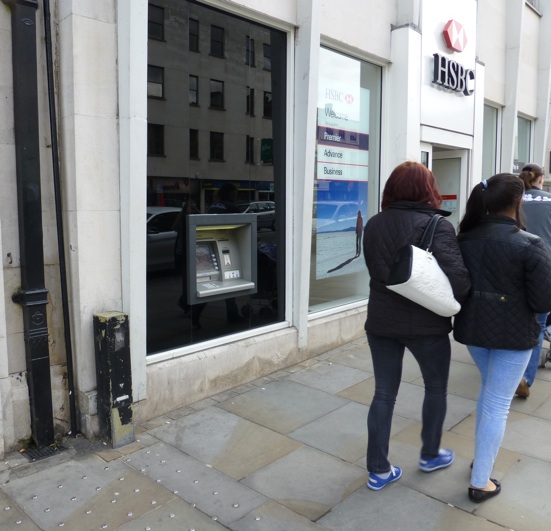 Pedestrians can still use it, though it’s somewhat awkward: 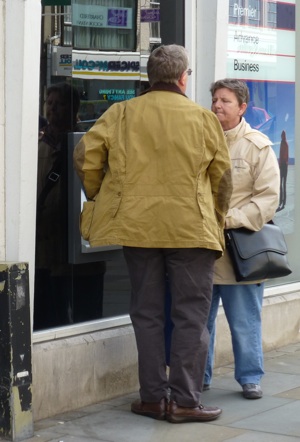 Put together, the non-functionals in effect determine the minimum viable shape, size and weight of the unit, and probably much if not most of its physical appearance and means and modes of operation. Sure, there’s function there – otherwise there’d be no point (other than as a piece of street-art, perhaps?). But in terms of overall form, the form doesn’t follow the function: form follows non-function.

The real problem, of course, is that ‘non-functional’ is a highly-misleading term: so-called ‘non-functional’ requirements such as usability, security, reliability, durability and accessibility all combine to determine a great deal of what we see on the surface as ‘function’.

And there’s another simple counter-argument, anyway: in reality, ‘form follows function’ is itself an example of form following a ‘non-functional’, in this case an arbitrary requirement that form ‘should’ follow function. Whatever that is… 🙂

The closest we really get to ‘form follows function’ is that yes, it does help if the surface form and user-interface (in the broadest sense of that term) provide or underpin a user-experience in which the item’s function and usage is seemingly ‘self-evident’. There’s a lot of work that goes into creating that sense of ‘self-evident-ness’, as any user-interface designer, user-experience designer or service-designer would attest. And that applies to just about everything: from bridges to buildings, from cars to kitchen-utensils, from software-architecture to enterprise-architecture, or whatever, the so-called ‘non-functionals’ are more critical than the ‘functionals’, for the form and effective function – the user-experience – of that design.

Again, no particular point that I’m making here: just seemed worth saying, that all.

Over to you for comment, anyway, if you wish?