If you want to understand the difference between price and value, look no further than the tragedy unfolding today in Glasgow: the Glasgow School of Art – Charles Rennie Mackintosh‘s great masterpiece of Art Nouveau – going up in flames.

This Wikimedia photo gives some idea of what it looked like when I last saw it six years ago: 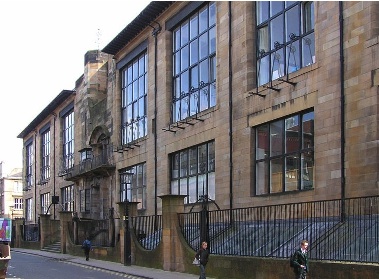 No-one significantly injured, fortunately – in body, at least. But a different kind of hurt applies for the fine-arts students who were just in the last hours of preparing for their degree show, and who have watched from the street as three or four years of their own literally painstaking work is destroyed in front of their eyes. Gone. No possible way to replace it.

The building is all but gone. It might be possible to replace some of it, but the soul – the connection through time – is gone forever.

The library is gone, too – itself a national treasure.

No doubt some idiot will now try to calculate some financial estimate of the loss – put a price on it, as a ‘valuation’. But they would miss the point: so far much miss the point as to only illustrate, once again, the utter insanity of our society’s so-called ‘economics’.

[Update (24May14): Courtesy of some amazing work by the fire-crews, it looks like the majority of the building has been saved. But the library is gone: utterly destroyed. And, for certain now, much if not most of the fine-arts students’ work. Price is not the same as value…]