No particular start-point for this one – just one of those first-thing-in-the-morning insights, that’s all. But it might be useful to various folks, and also acts as another potentially-useful SCAN crossmap, too.

In knowledge-management and process-management, there’s what’s known as the ‘knowing-doing gap’: the difference between what we know, what we’ve learnt, versus what we do with that learning, how we put that knowledge to practical use.

Which kind of maps exactly to that transition-point on the vertical-axis of the SCAN frame: 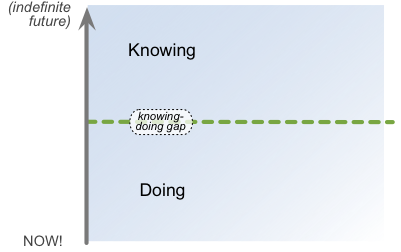 Yet what SCAN also shows us, via another of its crossmaps, is that that kind of ‘knowing’ tends to be dominated by theory, by structured-knowledge; whereas that kind of ‘doing’ tends to be dominated by step-by-step instructions, by rules and regulations. Leading, all too often, to people at work experiencing themselves as little more than ‘human doings’. Not human beings.

Which, in turn, implies a ‘doing-being gap’. Which we could likewise map onto SCAN as that transition-point on the frame’s horizontal-axis: 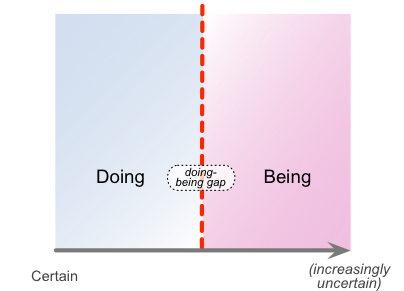 Which kinda suggests that we become ‘human beings’ to the extent that we either choose, or are allowed, to face and cross over the edge of panic, and work with – rather than hide from – the Not-known.

Without a term to describe it, it’s kinda difficult to say what it is. Or how best to use it. Or what those matching equivalents of the ‘knowing-doing gap’ and ‘doing-being gap’ would be. Maybe ‘becoming’ might do for now, perhaps? – in line with another classic relationship, between ‘being’ and ‘becoming’: 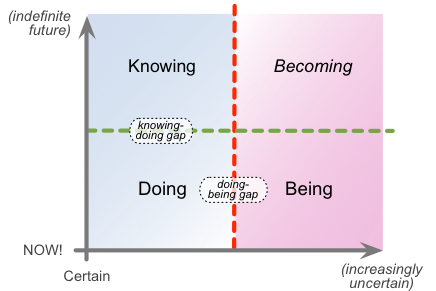 The ‘edges’ that came up in one of the previous explorations of SCAN also give some suggestions and potential crossmaps, though again, it’s not quite the same:

So where does this take us, in understanding enterprise-architectures and the like? What does this suggest, for you?

Comments, perhaps, anyone? Useful, I hope?