What’s the difference between mass-customisation and mass-uniqueness? And how much of data – or, these days, big-data – do we need in order to be able to support a mass-uniqueness business-model?

I’ve long been interested in the challenges of business-models for mass-uniqueness – supporting uniqueness at scale. Mass-identicality scales easily; mass-customisation scales quite easily, because we offload all of the final uniqueness-concerns onto the end-customer; small-scale uniqueness is relatively easy, though often very expensive; but mass-uniqueness is hard. Which is why most business-models and information-architectures in those spaces still do it really badly…

The other day I came across an interesting example of an everyday need for mass-uniqueness, in an article by Jillian Goodman (@goodjillian) in FastCoDesign, ‘Cup Size Isn’t Everything‘, about bra-size and bra-fitting, and the business-model of a lingerie retailer, True&Co. 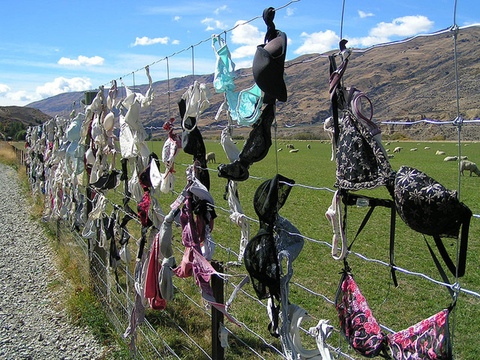 And was kinda shocked when someone sent this tweet back:

At first I didn’t know whether he was being puritanical, prurient, sarcastic, facetious or, uh, ‘humorous’, but, either way, it seriously missed the point – not least that mass-customisation is significantly different from mass-uniqueness. We’ll come back to that in a moment.

First, though, I ought to clear up one perhaps-important point: what’s a guy doing talking about bras? – because for the most part, surely, such matters are ‘women’s business’, both metaphorically and literally. The short-answer is that, as an enterprise-architect, I’m interested in everything: that’s my job. There’s also the fact that at art-school I spent years in mandatory life-drawing classes – so much so that even now my first reflex response to seeing a naked woman is still “where’s my pencil and sketchbook”. There’s also the fact that I come from a medical background, with anatomy-diagrams and suchlike pretty much everywhere around the house – a background that definitely helped when it came to the mandatory costume-design classes at art-school. I’ve spent a fair time around the ‘costume-nazis’ of historical-recreation societies – a good place to learn about the technicalities of bespoke-tailoring and the design-inadequacies of clothing over the ages. And I have bleak memories of accompanying a visiting friend some years back on a fruitless traipse back and forth along Oxford Street, trying to find any clothes-shop that could provide a bra for her EE+ size. (The shops are better now – mainstream retailers such as Marks&Spencer routinely go up to G or H – but it certainly wasn’t the case back then.) So yeah, it’s my job to notice things, and look at those things from other people’s perspectives, rather than solely my own: and this happens to be one of those things I’ve noticed, that’s all.

But whilst the bras themselves may be ‘women’s business’, the information-issues and business-model-issues are much the same for any form of mass-uniqueness. That’s what’s really the point here. We’ll use this as a worked-example, but whilst reading this, it’s really important to consider and explore how the same issues apply in retail, in healthcare, in customer-service, in information-search and so many other domains where high levels of uniqueness coincide with needs for high levels of scale.

My first reply to that tweet by ‘someone’ (I won’t give his name) tried to bring it back to the data-issues:

Which, eventually, led to this response:

Which, yes, is perhaps fair enough at first-glance, and at least takes us away from prurience or puerile ‘humour’. But it still misses the point, again: the big-data connection here is not solely in the questionnaire itself – though it’s good that someone’s bothered to do it even at that scale – but in the intersection with everything else that’s already known in that space.

There are two things that people routinely seem to get wrong about big-data:

Once we get clear of those mistakes, then a lot of this should start to make more sense.

What we’re looking at here is a business-model built around mass-uniqueness, in turn built around specific human needs: it’s really important to keep the focus on those points in all of what follows.

So, first, let’s compare this with another type of mass-uniqueness that’s largely dependent on big-data: Amazon retail. There, the human need is, well, whatever it is: every potential client’s needs, at each moment, are likely to be different from those of everyone else – and even from those of the same client at a different time. The power of the Amazon-retail business model is that it can handle uniqueness at scale (versus, say, McDonalds, which handles limited-customisation at scale). It does so in the intersection of a whole suite of themes:

All of those need serious data-manipulation, and much more, to make them work well.

But notice that whilst there’s mass-uniqueness in the way that the offer is managed in Amazon’s model, for each item-type Amazon offers what is, at best, mass-customisation: different items in the same class (smartphones, for example), and/or variations within offers for a single type (such as colourways, or clothing-sizes). In this case, by contrast, there’s a need for mass-uniqueness for the item-type itself – which is a significantly different challenge both for the business-model and for the information-needs.

For too many decades (centuries?), business-models have been what we might call ‘inside-out’, organisation-centric: “here’s the product, take it or leave it – whether or not it fits your need is your problem, not ours”. At last, though, there’s somewhat of a belated awareness that the business-models that work best are those that provide a better balance between ‘inside-out’ and ‘outside-in’ – looking at things from the customer’s perspective, the customer’s needs. So, for some clarity here, let’s look briefly at some of the customer-needs in this context:

And all of that is before we consider anything about fashion, appearance or style – which, however, is all that most people seem to notice…

So what’s the fashion-industry’s usual response to all of this complication? In most cases, a really limited attempt at mass-customisation – barely one step up from ‘one size fits none’ – and perhaps provide an adjustable strap or two to sort-of help the end-customer do something that perhaps just might, on rare occasions, get somewhat closer to something resembling a not-very-good fit. I’ve seen survey after survey that’s suggested that, even at best, and even with supposed professional bra-fitters at some lingerie stores, fewer than a fifth of all woman have any bra that actually fits – whether it looks good or not. Not exactly what one would describe as a great success, then.

And yes, women have been putting up with that kind of mess for decades now, if not centuries. Sigh indeed… Or ‘ouch’, more accurately…

So consider – just consider – the possibility that there’s a better way to do it: a way that’s built around mass-uniqueness rather than low-grade mass-customisation or, worse, one-size-fits-none. What would that look like? Regardless of any details, or surface-appearance, we know that it would have to start from at least these two themes:

Otherwise known as a business-model based on big-data, oriented around people-first, not data-first.

What does this example tell us, in a more sense? – about business-models, business-architecture, enterprise-architecture, big-data and all of that stuff?

First, perhaps, is that if the business-context carries a high degree of inherent-uniqueness at scale – and just about anything that impacts directly upon real-people will certainly do so – then finding the right approach, or right ‘angle’, to support mass-uniqueness will pay big dividends.

Finding the right approach is not likely to be easy, precisely because the context has high levels of uniqueness at scale – and uniqueness itself, by definition, does not scale well. The trick is in finding the right ‘samenesses’ within all of that uniqueness.

In systems terms, every context is fractal – so somehow, and somewhere, there will be samenesses interweaving all the way through all of those uniquenesses. In Amazon’s case, for example, the key samenesses are in the ‘back-office’ part of the business-model, enabling customers to select an arbitrary list of almost any combination of anythings, and have it all picked and packaged and delivered, cheaply and efficiently, all in one go. In another industry… – well, it’ll be something different. That’s the whole point.

And often those ‘right samenesses’ will only come to light by doing all kinds of mix-and-match with many different data-sources and the like. The term ‘big-data’ itself is often somewhat of a misnomer: big-data is not necessarily about the size of the data-sets, but more about the patterns and cross-connections that can be found between them. Hence that-someone’s comment about “A single questionnaire, even from a million women, doesn’t get into the #bigdata league” actually misses the point: a questionnaire from a million women, when cross-matched with an appropriate multiplicity of other data-sources, can be very powerful indeed.

The other crucial point about that “questionnaire from a million women” is that it provides an outside-in view – not solely the usual inside-out view cooked up by the company’s product-development group from a couple of client focus-group sessions. Without that kind of outside-in view, I’d suggest, a viable business-model for mass-uniqueness simply is not going to happen.

And please, let’s just gloss over the swathe of errors and misunderstandings implicit in that first response-tweet, that “In what porn fantasy does bra customization count as #bigdata?” A business-model is a business-model, and data is data, whatever industry it’s in. Getting proper mass-uniqueness into bra-design is not some prurient porn-fantasy, it’s about a real everyday issue that, by definition, directly affects perhaps half of the human race – and even if we ourselves are not part of that half, might it not be reasonable to at least show some real respect to those to whom it is a matter of personal concern? After all, when we look at such things in proper depth, respect – and each-way respect, at that – is always the first and central part of any viable business-model: if we want our business-models to work, that’s where we need to start.

I’ll leave it at that for now, I guess: any comments, perhaps?

3 Comments on “Mass-customisation, mass-uniqueness and big-data”