The tall guy in the black hooded cloak with a scythe and a penchant for SPEAKING IN CAPITAL LETTERS came calling for two people I knew in the last two days. Two goodbyes…

The first was, I’ll admit, very much unexpected. We’d been out of touch for a year or two, but when this email came through from her husband yesterday, with only her first-name as the subject-line, it was clear straight away that something was very wrong:

I’d like to call you, but don’t have your number.
You can call me at xxx-yyy-zzzz (it’s VOIP with voicemail),
or reply to this email with your number.
Thanks. -Don

“Bad news has good legs”, as my elderly mother often puts it. And yes, when Don and I connected up on the phone a few minutes later, it was indeed bad news: Linda was dead. 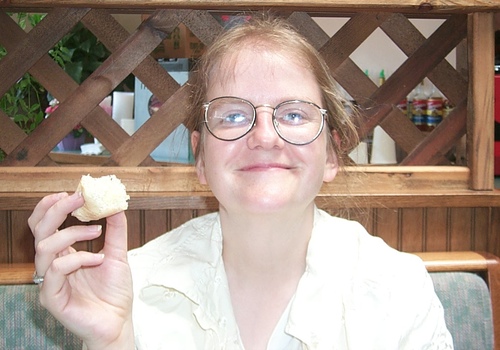 Linda Moore Gentile. I hadn’t even known she was ill – but then she’d taken some care to keep that fact quiet from just about everyone for some months, until it was all over. Don told me, through held-back tears, that I’d been one of the first of their shared friends that he’d called. Oh well…

She’d been a very good friend indeed, a true support through what had been some very difficult times for me back in the late ’80s and throughout the ’90s. We’d first come together around my work on the Wyrd books – Positively Wyrd and its sequel Wyrd Allies – and for a while she even ran an small online collective of ‘wyrdies’ focussed around the books. When I first knew her, she was still in England, but moved quite soon after to the US to be with her husband, first in the Bay Area, then later travelling around together throughout the West on their much-loved motorcycles and the mobile-home.

One of the passions and products of all that travelling was the Markeroni.com website, which slowly grew to a fair-sized online-community, ‘collecting’ historical markers and historical landmarks throughout the US. In much the same way, and for much the same reasons, she’d been a keen supporter of BookCrossing, leaving books around for others to find in all manner of strange and out-of-the-way places.

She’d also been a keen blogger and writer in her own right, again mostly about her travels, and on the practicalities for a small woman riding around on her own large and heavy motorcycle – motorcycling being a passion we’d both shared until a mishap with wet tram-tracks in Melbourne put an end to my own motorcycling days.

The other main theme we’d shared, perhaps, was a fondness for the writings of someone else who’d met up with the CAPITAL LETTERS guy yesterday – in fact the person who’d invented that character in the first place: 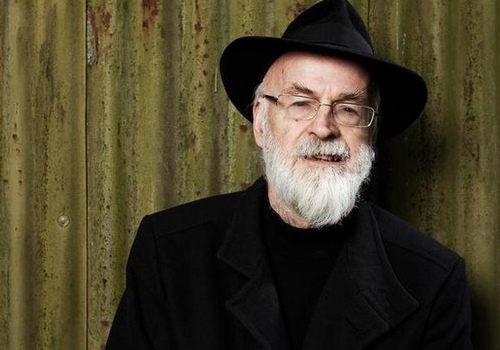 Unlike for Linda, the death of Terry Pratchett (or Sir Terry, as this country’s ridiculous ‘honours system’ would title him) was literally front-page news, of course – a BBC obituary, for example. He wouldn’t have remembered me – I was literally one amongst millions – but I did meet him in person once, in Melbourne, quite by accident (I was on my way back from work, he was on his way back to his hotel from a SciFi/Fantasy gathering). Unfailingly polite, unfailingly amiable, even to yet another mildly-awestruck fan – impossible not to like him. He’d also been a regular visitor to our local independent bookstore, Red Lion Books, so I might have been able to meet him again there – but the last time he’d come through had been 2005, the year before I came back to Britain.

His family said his goodbyes for him in true Pratchett fashion, via a short-short Discworld tale presented as a brief series of Tweets:

(In a similar happy-sad-quirky mode, one of the fans started up a Change.org petition, addressed to Death, to ‘Reinstate Terry Pratchett’ – with the reason for the petition being that “Because Terry Pratchett said this: ‘There are times in life when people must know when not to let go. Balloons are designed to teach small children this.'”. Last I saw, it had already achieved more than 20,000 signatures. No real chance, of course, as everyone knows: but as Pratchett himself also wrote in one of his books ‘Million-to-one chances crop up nine times out of ten”, so it might just work? 🙂 )

It’s difficult to say how much he’d influenced my own writing: a lot, certainly. At the least I’d credit him with helping me break free somewhat from the formal voice even in nominally-formal writing, such as here. Philip Pullman, in a brief interview on the BBC website, said of Pratchett that “There is nothing spiteful, nothing bitter or sarcastic in his humour”: with his help I think I could reasonably claim the former of those, but yes,  still too much of the latter two – even though in many cases it might be the only way to stay sane in response to the utter inanity that besets so much of our world…

His stark realism about realpolitik – particularly in his portrayal of Vetinari, the mostly-benevolent tyrant of the fictional city of Ankh-Morpork around which so many of Pratchett’s stories revolve – have also helped to temper some of my all-too-reflexive idealism: reality is that the human world is a lot messier and, yes, a lot more myopically-stupid than I’d like it to be, and I do need to face and accept that fact.

There’s also his collaborations: Good Omens, for example, co-authored with Neil Gaiman – very much a favourite book to which I return time after time. And the Science of Discworld series, co-authored with Ian Stewart and Jack Cohen, which help to reaffirm some of the real magic of real science against the over-simplistic stupidities of Skeptics and their ilk.

For both of those people-that-I-knew, perhaps the last word should be from Death himself, from Reaper Man, the book in which, via Pratchett’s skill with text, he became a more human character – or more humane, perhaps:

“What can the harvest hope for, if not for the care of the Reaper Man?”