Back a couple years or so ago, I was at the conference of a well-known group in enterprise-architecture and the like. (They’d best remain nameless here, for reasons you’ll see in a moment.) They were just launching a new initiative on IT in healthcare, and I found myself chatting with some of the group’s leads for that initiative.

Since I come from a healthcare background (both my parents were GPs – ‘family doctors’, to US folks – and deeply involved in medical education), I thought I’d ask that group’s opinions on what needed to be done to prevent a repeat of previous healthcare-IT fiascos, such as the £10bn write-off on the failed UK NHS National Programme For IT. The way they waved their hands in dismissal – “of course it won’t happen again, it’ll be no problem this time!” – left me kinda suspicious and a bit concerned, so I thought I’d dig a bit deeper:

— How much did they know about the developments in clinical practice and the like over the past decade, I asked – you know, developments in aspects of healthcare other than just IT?

Blank looks all round.

— What did they know about the ongoing problems with clinical-trials of new medicines, and the increasing doubts across the healthcare-professions and elsewhere about the validity of past or present data upon which prescriptions have been based?

Blank looks all round. (“Not our problem”, one of them muttered under his breath, but that was about it.)

— Did any of them read, for example, the BMJ or JAMA, on a regular basis?

Definitely blank looks this time. A shrug, a shake of the head.

— Did any of them actually know what the BMJ or JAMA were?

Blank looks again. One of them offered that, yeah, he’d heard of one of them, but didn’t know what it was.

At that point I had to explain that the BMJ and JAMA are the lead journals for all healthcare-professionals in the UK and US respectively. Which might be kinda relevant to anyone developing healthcare-IT, don’t you think?

Well, they didn’t quite laugh at me to my face about that, but in effect it was pretty close – a scornful dismissal, at best. In other words, about the literally life-and-death field for which they’d now proclaimed themselves to be the new standard-bearers, they were not only clueless, but consciously clueless, even intentionally clueless – and seemingly proud of it, as well. Ouch… At that point the Tarot character of ‘The Fool’ kinda came to mind – too self-absorbed to notice that he’s walking straight over a cliff: 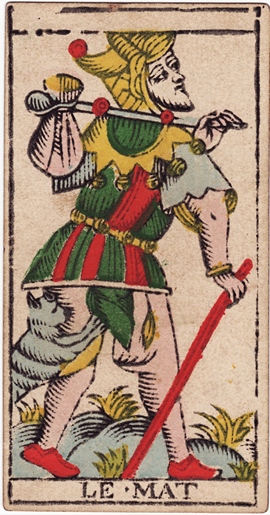 At which point I kinda gave up in disgust, walked away, and haven’t been back since. Oh well.

Since then I’ve continued to watch the healthcare-IT space with some trepidation and quietly-increasing alarm. It’s not just that group, whose occasional pronouncements on this field still to me seem as clueless as ever – riddled with wishful-thinking, arbitrary assumptions and a scary lack of understanding of the real human complexities of healthcare. Perhaps even more, it’s the near-exponentially-increasing mess of ‘healthcare-apps’ that don’t and can’t talk with each other – or, in Apple’s case, all but actively prevented from being able to talk with each other – leading to a nightmare scenario even worse than that we suffered in the early days of microcomputer-based desktop-publishing back in the late 1970s and early 1980s, with literally hundreds of incompatible file-formats, on top of further hundreds of incompatible disk-formats. And worse again, I’m seeing pharmaceuticals and others salivating at the idea of combining big-data with the already-excessive patent-scams to create a fully-proprietary form of ‘personalised healthcare’, not as a means to make people’s lives better, but to entrap people into lifelong dependence on that one provider, at a price of that one company’s choosing. Not good… not good at all.

But at least I’m not the only one who’s worried about this. In a recent BMJ, Nigel Edwards wrote an op-ed on ‘Involve clinicians to avert a digital disaster‘ (cite: BMJ 2016;352:i888). As he warns there:

Too many systems make life worse for clinicians – but achieve little for patients.

The good news, he says, is that yes, technology can definitely help – no doubt about that. The bad news is that, misconstructed or introduced in the wrong way – as it still too often is – then at best it merely gets in everyone’s way. (At worst? – well, you get the picture…) To counter this, he says, there are four crucial lessons that need to be learnt from troubled rollouts in the past, in healthcare and elsewhere:

Yet it’s not just the engagement of clinicians that’s needed here: it’s also nurses, GPs, pharmacists, physiotherapists, anaesthetists, everyone in healthcare. And, perhaps especially, to include and engage patients and their families – which is the whole point of the exercise, after all?

The other thing that worries me a lot about many current approaches to healthcare-IT is the all-too-common assumption that it’s essentially the same as all other usages for IT. After all, said several of the IT-obsessives against whom I struggle so often in enterprise-architecture, we’ve done IT-architectures for banking, for mining, for IT-security, for interoperability in the defence-space and suchlike, so why should healthcare be any different?

We forget such distinctions at our peril – and, in healthcare-IT, at many other people’s peril too…

Another ‘You Have Been Warned’ item, perhaps?