↓ Skip to Main Content
Home › Business › Complexity / Structure › Why and Because

After years of going back and forth to Latin America, I still struggle with the difference between para and por – both which sort-of align with the English word ‘for‘, but in different and often-confusing ways.

Going the other way, though, the English ‘why‘ is probably utterly mystifying to Spanish-speakers, and many others too. That’s because there are two kinds of ‘why’ – but there’s nothing in the language as such to distinguish between them. And they’re significantly different, with significantly different functions. Oops…

This was brought home to me the other day, when watching a video of Simon Wardley (of ‘Wardley-maps‘ value-chain mapping fame), in his OSCON keynote ‘Crossing the river by feeling the stones‘. The video itself is pretty much essential viewing for anyone interested in enterprise-architecture, business-architecture or context-space mapping – a very strong recommend. Yet at around 09:11 to 09:29, up comes this graphic: 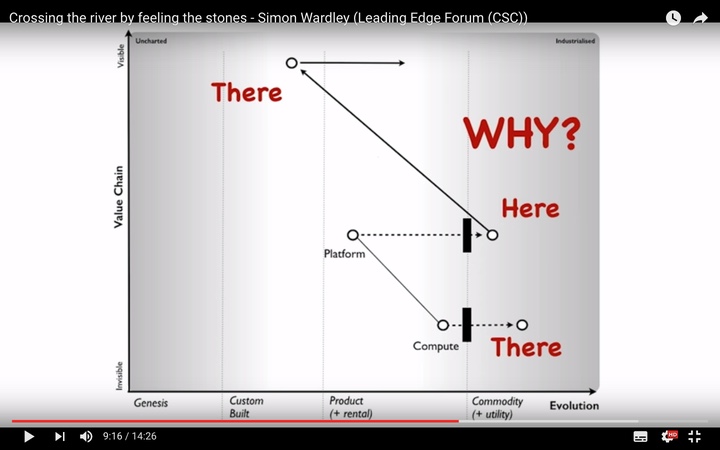 And then I remembered that I’d come across the same assertion whilst reading an article of Simon’s from a year earlier, on ‘Why big-data won’t improve business strategy for most companies‘:

WHY is a relative statement i.e. WHY here over there. However, to answer the question of WHY you need to first understand WHERE and that requires situational awareness.
Those who lack situational awareness often talk about the importance of WHY? They describe how strategy should be derived from your vision (i.e. general aspirations). They often look at you agog when you ask them “Can you show me a map of your competitive environment?”

Again, I blinked: What the…?

But in that case, though, I wasn’t the only one who’d blinked. Oliver Schmitz-Hennemann posted a comment that summed up almost exactly my concerns:

I am not 100% with you with the WHY-WHERE discussion. Although I might be thinking about another why than you are. In the Themistocles case the why from my perspective might be obvious: “Why defend against an attacking army. Well: survival”.
But too often I have seen product and other discussions about the what (in terms of how to do something) where nobody could explain the why (to do this in the first place). Or in other words, why is this problem worth solving. I am with you that situational awareness helps to answer this why, and the answer will should consist of a “where on the map” we see an opportunity.

And yes, to me, that’s exactly the point: “I might be thinking about another why than you are”. There are two kinds of ‘Why’ involved in this – not just the one.

The first why is about purpose. Simon Wardley is perhaps right ignore this in his analysis, because most companies seem to be utterly atrocious in their (lack of) understanding about it. But this is the ‘Why’ that Simon Sinek means when he says ‘Start with Why‘; this is the ‘Why’ that I mean when I talk about enterprise-vision and suchlike; it’s the ‘Why’ that’s implied in the Spanish term ‘por que‘ (with a space between the two words – literally, ‘for what’). It’s a ‘Why’ that begins a quest; a ‘Why’ that we could denote by the start-bracket of a function – why( – or perhaps with a Spanish-style notation of ¿why?.

The other why – the one the Simon Wardley seems to be referring to – is about conclusions, a ‘That’s why.‘. It’s the ‘Why’ that’s implied in the Spanish term ‘porque‘ (one word, without a space – usually translated as ‘Because’). It’s a concluding-‘Why’ that ends a quest, one that describes the outcomes of that quest; a ‘Why’ that we could denote by the end-bracket – )why. – or perhaps with a Spanish-style notation of ¡why!.

If we use Damien Newman’s ‘the Squiggle‘ to denote the process of enquiry, then we would see that distinction in visual form like this:

And if we map out the other interrogatives in the sequence I’d probably use in my own sensemaking-work – ‘Why’ before ‘Who’, and suchlike – then it might look like this:

So yes, when the strategy-map has been done, in Wardley-mapping style, to describe and document the needed situational-awareness, then the core questions typically do indeed revolve around ‘where on the map’ – exactly as Simon Wardley says. And that ‘Where’ does indeed come before the final concluding-Why, the ‘Because.’ that marks the end-point of the strategic-analysis.

Yet that ‘Where’ denotes ‘Where on the map‘ – which is not the same as ‘Where in the real-world‘. And that distinction is more than a little bit important…

Likewise the concluding-Why – the ‘Because.’ – is not the same as the questing-Why, the ‘vision’ with which the enquiry begins. And that distinction too is more than a little bit important…

In short, we’re dealing with two distinct kinds of ‘Why’ here:

To properly do strategy – or anything else, for that matter – we need to use both forms of ‘Why’. But they’re not the same – so don’t mix them up!

4 Comments on “Why and Because”