On innovation, foundations, scaffolding and Portakabins

Given that I’m reframing my work here as ‘maker of tools for change’, it seems worthwhile to republish from my now long-defunct Sidewise blog this 2010 post on some on the realities of change that must be acknowledged and addressed if attempts at innovation are to have any chance of success.

In uncertain times, innovation is essential. To help in this, there are plenty of well-known techniques and processes, to guide the creation of new ideas in business and elsewhere. But how well do we support the emotional side of innovation – the real difficulties in expressing new ideas to others, and starting to put them into practice? Sometimes it can take some sidewise thinking to see how the ways in which we respond to incomplete ideas we block the innovation that we need – and what we can do to make it safer for the ideas to flow.

It takes time for new ideas to cook: and while they’re cooking, they’re still in a half-baked state. They won’t stand up on their own. They often look like a mess. So don’t keep pulling them out of the oven and complain that they’re half-baked: they’re meantto be in that state. And if you keep pulling them out of the oven, they’ll never get a proper chance to cook. So don’t yell at the chef if you do so?

New ideas will always seem crazy at first. Almost by definition, new ideas are often not ‘rational’. If they don’t make sense, it’s because to do their job properly they can’t make sense: the whole point is that they’re moving outside of the known and the certain, which is what’s usually meant by ‘making sense’. New ideas move outside of the frame of ‘the known’, in order to create a new frame in which new things can happen; but what we think of as ‘rational’ will only work within the confines of the old frame. If we only allow things to work in expected ways, we’re limiting our chances for the new.

A prototype isn’t a finished product. A ‘beta’ prototype will be usable, but may well have some bugs in. An ‘alpha’ prototype should be able to do something useful, but will definitely have gaps and bugs and clunky ideas and probably some awful mistakes too. That’s why it’s a prototype: to find those mistakes before they get any further. And we usually have to make a lot of mistakes before we get to something that really does work well. Prototypes are meant to be a safe place to make those mistakes: so don’t yell at people for making mistakes in the prototypes! Instead, make prototypes a safe space in which to learn from each mistake: that’s the real aim here.

And even an ‘alpha’ prototype is quite a long way towards the realising of a new idea. A first prototype may well be no more than a scrawl on the back of a napkin, a crude lashup made up of paper cups and string: don’t be surprised at this! When you’re looking at any early-stage work on a new idea, the most important failure to watch out for is a failure of your own imagination. 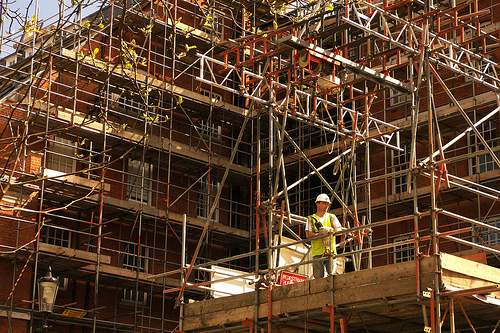 New ideas need scaffolding to hold them up. In the early stages, that scaffolding will itself be fragile – so don’t be too quick to kick it down! If you do that, what you’re really saying to others is that you’re more interested in playing the playground bully than in helping anything new get going – so again don’t complain that nothing much seems to get off the ground when you’re around.

When ideas are in their first formative stages, that’s when they’re at their most fragile – and they’ll often need your active help to hold them up long enough to get even the first scaffolding in place. Don’t walk away whilst you’re holding aloft some critical piece of the puzzle – that really won’t help!

And scaffolding isn’t pretty. It often looks a mess. And it usually has its own structure, its own way of holding itself together, with little or no connection as such to what it’s holding up – in fact much of the scaffolding isn’t attached to the final structure at all, but is simply there to provide a means to work on that inner structure. So don’t kick it down; don’t worry about it. Trust that it’ll be taken down when the time is right – and not before.

For a long, long time, the early stages of implementing any new idea will look like the early stages of a building-site: a great big muddy hole in the ground that’s of no use to anyone. But if those foundations aren’t there, and aren’t done right, the final structure will fall over. The bigger the new idea, the deeper its foundations will need to go. So don’t complain that it looks a mess: every new idea starts out that way!

And foundations aren’t something we can skimp. We can’t go back afterwards and put them in later. Foundations take time to build; and they have their own structure, too, which can vary quite a bit from place to place, depending on the ground in which they’re set. Hence there’s every bit as much thought needs to go into the foundations as it does into what goes ‘up top’ – even though we’ll never see those foundations again.

Every building-site has its portakabins: tired, battered-looking container-sized sheds that are supposed to be temporary but turn out to be there for a lot longer than we might expect. They may not look good, but they’re a necessary evil – and no-one should make the mistake of thinking that they’re the final building! The same is true of new ideas: often we’ll have to hang out for a while in rough, practical side-themes – but they’re not necessarily connected as such with the structure that’s being built, and no-one should think that those ‘site-offices’ are the final product. They’re just places to collect things together, to store the conceptual tools, perhaps shelter from the elements for a while: nothing special, and – we would hope – definitely temporary, to be moved on to the next metaphoric building-site when the work is done.

Portakabins are not just used for site-offices: sometimes even the entire staff may be pushed out into portakabins for a while, so that some improvement can be worked on. It’s usually a bit cramped in there, a bit grubby, but again a necessary evil. We have to remember that it’s only temporary, and whilst, yes, it’s worse than what we had, it still works well enough to keep us going, and we have been promised something that will work even better soon. The same is true of new ideas and new processes: sometimes we need to work on a temporary intermediate process for a while to keep things moving whilst a larger change is going on.

And the fitting-out of a new building can take a long time, too: nothing much may seem to happen for quite a while once the shell of the structure is complete. But there’s a lot that needs to happen inside before the structure is fully usable: all those pipes, cables, access-shafts, ventilation-systems, interior-walls and so on. It’s the same with process-development or product-development: the journey from first-concept to lab-prototype may seem lengthy, but that can be almost trivial compared to the transfer from lab to production-line – especially in highly-regulated contexts where safety or security are at risk. And the same is true of new ideas: there’s a lot of work to go from an initial idea to hypothesis to an algorithm or business-rule that’s robust enough for real-world use. At each of those stages, there are new ideas, new critiques – each of which has its own back-of-the-napkin birth, its own shaky scaffolding, its own prototypes, its own muddy foundations and clunky portakabins of metaphor. A lot of letting-go that we need to do to allow anything new to become real.

The construction is finished: we can now move to the new structure – or new idea, new process, new product or whatever. Then the shock hits: it’s not the same as what we used to have! It’s not what we know, what we’re used to and comfortable with, the old certainties that fitted like an old overcoat. Well, yes, it is new, it is different: that’s the whole point – it creates new possibilities that we didn’t have before, it’s fits a better fit with circumstances that have changed. It doesn’t mean that the old way was ‘wrong’, or that anyone was necessarily ‘wrong’ for using it: it was a different fit for different times, different needs. And yes, sometimes nostalgia does have a purpose… yet at some point we do also need to move on from the old. We went through all those prototypes, the building-plans and everything else, and you can click here to learn more – it’s a bit late to be attacking it now… and if we really don’t like it, perhaps it’s time to move on to something else, because that’s another option that we do always have.

So allow space for ideas to grow, for new structures to be created. Allow ideas to be half-baked for a while; allow prototypes to be rough, scaffolding to be rickety; accept the mess that’s made on the building-site, because it is only temporary – assuming that we do make it possible for the construction to continue, of course… And remember always that whilst many new ideas will fail, the greatest failure of all is a failure of imagination: it’s always our responsibility to create the right ground for the new to grow.

2 Comments on “On innovation, foundations, scaffolding and Portakabins”