No, this one’s not about enterprise-architecture, though it is sort-of about big-picture change…

Or, to be specific, it’s about my other main project at present a fiction-based series and storyworld called The Viner Codex.

The core aim of the project is use a sort-of-steampunk genre to explore big-picture themes about society, technology and interrelations between people and peoples – hence the project’s tag-line of ‘Weird politics. Weird plant-things. Weird battles in which nobody dies.‘

So after a year’s work and several false-starts (some of which you can now also read on the very preliminary project-website…), I have at last finished the first-draft of the first full-size story in the series, The Viner Journey. The book-blurb is as follows:

In a parallel 1880s America, the Enginer is shown evidence of a strange technology called ‘vinery’ that can grow plant-based structures and machines – buildings, bridges, pumps, ploughs and more. At present, the technology only in exists in the mysterious Commonwealth – a centuries-old egalitarian alliance of countries centred on Britain. Despite threats from a shadowy organisation called the Committee, the Enginer is determined to bring this technology back home to America.

But he’s not the only American who wants to do this. One is the wealthy Senator, who aims to possess vinery in America, and is kidnapping viners from the Commonwealth to create a personal, profitable monopoly of his own. In the meanwhile, others set out to hijack the Senator’s plans, and use vinery instead to help them restart an old war.

Caught up in the middle are Anton and Sasha, young viners from the Commonwealth, who are each on their own journeys of discovery; and Estrella, a different kind of creature, on a quest to find out who or what she really is. Weird politics, weird plant-things, weird battles where nobody dies: there will be all of these, and more, before the Enginer can achieve his aim.

We’ve also developed a lot of visuals for this story and the project as a whole, such as this costume-sketch for Sasha and Anton, two of the key characters in The Viner Journey: 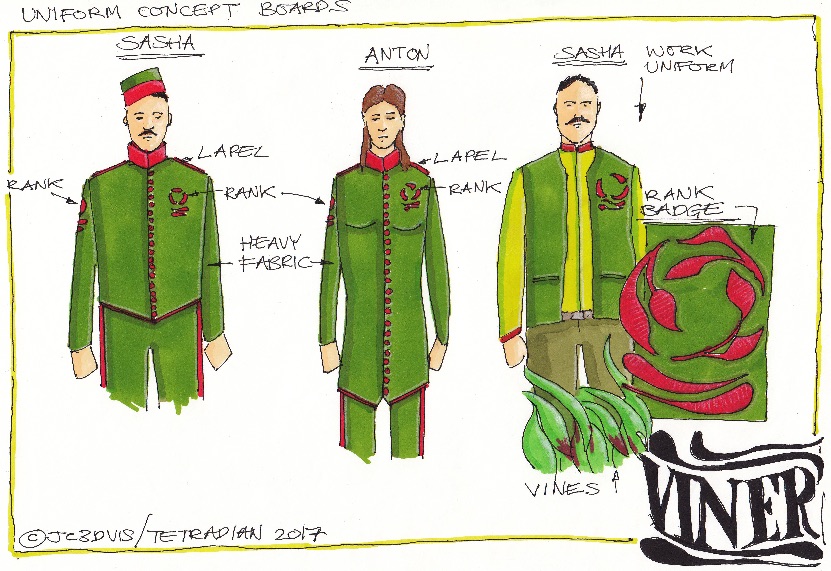 These visuals too should start to appear on the project-website over the next few weeks.

So right now I’m looking people to review the book. It’s only in first-draft form as yet,
but The Viner Journey is still a full-sized novel – around 140 chapters and 100,000 words, or about 450 pages in big-print PDF.

If the blurb piques your interest, do have a look at the first nine chapters that are already online on the Viner Codex website:

If you like what you see, please ask me for the full first-draft (PDF, 1.1Mb) – either email me direct, or put a comment here so that I can pick up your email-address from that. I’d really value your comments on the book, to help me finish it to final-draft and get it off to market.

Over to you – and thanks again!