↓ Skip to Main Content
Home › Business › Who are your anti-clients?

If you’re in any kind of business, you’ll know who your clients are: you deal with them every day. And serving their needs will no doubt take up much of your attention, too.

And you, or someone in your organisation, will know who your prospects are – the people who aren’t clients yet, but who could or should be at some time in the future. Finding them, relating with them and paying attention to their present and future needs will take up a lot of someone’s time and attention, even if it’s not your own.

But do you know who your anti-clients are? Are you even aware that they exist – or how much impact they can have on your enterprise? Because if you don’t – and you don’t pay attention to their needs too – you could well find yourself out of business…

To make sense of who or what those ‘anti-clients’ are, and why they’re so important, you may need to think sidewise for a while, perhaps taking in a more expanded view of ‘the market’ and a broader-than-usual understanding of ‘enterprise’.

The enterprise and the market

The quick summary is that every market is the intersection of at least three very different ‘economies’: transactions, attention and trust. (The trust-economy is also known as the reputation-economy, because reputation is a kind of secondhand trust that we garner from others.) For much of the past century, most organisations focussed almost exclusively on transactions, sometimes barely even recognising the existence of the other economies – or else assuming that they didn’t matter, because large organisations could monopolise attention through mass-media, and ignore customers’ concerns by sheer dominance in the marketplace. But in the past decade or so, ubiquitous access to the internet and mobile-media have changed the game completely. The old days of control and the one-way one-to-many broadcast have gone: welcome instead to a new age of business transparency, where your products, your prices, your customer-services, your mix-ups and mistakes, your honesty (or lack it), your everything, is almost wide open for everyone to see – and you have no control over any of it at all. So that means that the attention-economy and trust-economy come right to the fore, as almost the only choice you have in this. Which means that you now must pay real attention to your anti-clients – or they’ll crucify you. With glee… whether you deserve it or not…

The other key to this is to recognise that the enterprise is always greater than the organisation. Once we understand this, it becomes useful to categorise the people beyond our organisation in five different ways:

Clients and prospects are straightforward: they’re people who’ve done business with you, and/or who probably will do so in the future. Every business knows how to work with them, or it wouldn’t be in business – that’s what CRM systems and shops and service-centres are for, for example.They matter a lot, obviously, but we can skip over them for now.

Ex-clients are people who’ve been clients at some point in the past but who, for a wide variety of reasons, no longer engage in transactions with the business; non-clients are people who’ve never done business with the business, and are never likely to do so. They’re not prospects, and they’re not clients – hence in terms of the transaction-economy alone, of no apparent value to the business. Hence many businesses either ignore them, or else try to demand their attention via the scattergun strategies of mass-marketing – those dreaded seven-o’clock-in-the-evening calls that consist of nothing but pre-scripted spiels from the commission-driven klutz at the call-centre. Which is extremely dangerous, because either way it’s a quick way to convert ex-clients and non-clients into anti-clients – and that’s not a wise move in the internet age.

Anti-clients are people who are the active opposite of clients. Your ex-clients and non-clients are merely not-interested: they’ll reject your organisation, but only in the form of a _passive_ non-engagement. But anti-clients are different: not only will they not engage in transactions with you, they will actively reject engagement with your and your organisation – and incite others to do the same. In some cases – such as environmental activists, for example – you may have no direct contact with them at all. Even if you’re not aware of them, they can still destroy your reputation before you know what’s happened. And if you lose your reputation, you’ve lost people’s trust; if you lose trust, you’ve lost people’s attention; if you lose people’s attention, you’ll have lost their transactions, which in turn means you’ve lost any possibility of profit. Without trust, your prospects evaporate, your clients become ex-clients – and unless you’re aware of your anti-clients, you’ll have no idea why.

But the worst part of this is that we convert ordinary people into our anti-clients, through our own actions or inactions. For example, many marketers think that using call-centres and the like is just a numbers-game – which it is, but not in the way that they might expect. Call-centres might make profit if just one cold-call in a hundred converts into a real transaction; with online spammers it can be as low as one in a million. But what they do in the process is annoy a vast number of people who are not interested at all and don’t like having their attention stolen by the spammers – which can turn them into active anti-clients. Would you buy double-glazing from someone who rings you up whilst you’re in the shower? – or are you more likely to avoid doing business with them in future? If the time-wasting phone-calls become more than just annoyance – the seventh time this evening, for heaven’s sake! – aren’t you likey to become an active anti-client for that firm, seeking to do anything you can to stop those darn calls coming in? Now imagine that happening hundreds, thousands, millions of times a day: that’s a lot of anger building up there, and at some point someone is going to cop the lot… That’s what happens when we create anti-clients.

Musician Dave Carroll had been an ordinary everyday client of United Airlines, until the day that careless baggage-handlers broke his very expensive guitar. Quite reasonably, he asked for compensation to cover repairs; but as he explains in a statement on his weblog, just about everyone in United, at every level, gave him the run-around, for almost a year:

At that moment it occurred to me that I had been fighting a losing battle all this time and that fighting over this at all was a waste of time. The system is designed to frustrate affected customers into giving up their claims and United is very good at it. However I realized then that as a songwriter and traveling musician I wasn’t without options. In my final reply to [United’s Customer Service representative] I told her that I would be writing three songs about United Airlines and my experience in the whole matter. I would then make videos for these songs and share them on YouTube, inviting viewers to vote on their favourite United song. My goal: to get one million hits in one year. 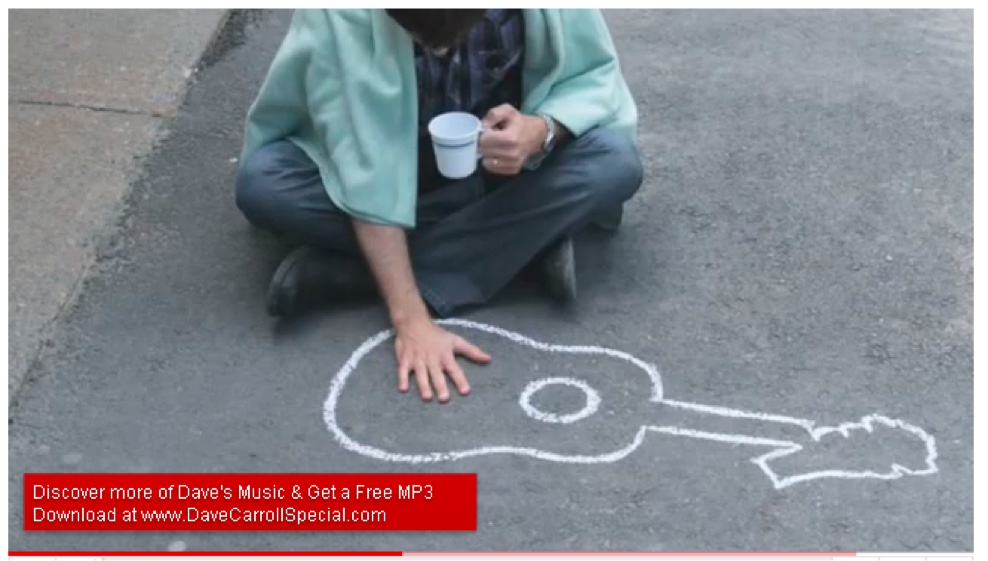 Someone in United Airlines finally realised they had a significant PR problem by the time the video had already had 50,000 hits – barely an hour or two after it was first posted. And there was nothing that United could do to stop it: it was on a popular public website, with no libel or anything else that any lawyer could reach. Three days later, the video had already gone well past the million-hits mark, and had appeared many times on national and then international TV news – with United left floundering in full-on damage-control, their vaunted reputation visibly in tatters. Not trivial at all.

In reality, United’s complicated buck-passing games to avoid paying a customer’s entirely reasonable claim would almost certainly have cost them more money overall than if they’d paid up-front in the first place – a good example of a failure to understand whole-of-system costs. But in this case those games to ‘save’ the relatively small sum of $1200 ended up costing the company untold millions of dollars in many different ways, both direct and indirect. That’s the amount of damage that just one committed anti-client can do to a very large, very powerful corporation: just how much damage could your anti-clients do to yours? And what could you do to prevent that from happening?

Step 1: Recognise that anti-clients will always exist, and that they can cause very serious problems for your organisation.

Step 2: Recognise that your anti-clients are never going to be under your control. (This is where distinguishing between ‘organisation’ and ‘enterprise’ is helpful: an organisation is bounded by rules, and you _can_ control within those bounds; but an enterprise is bounded by _shared-commitment_, where control doesn’t work – but honest negotiation can.)

Step 3: Recognise that your anti-clients’ grievances are real to them – and that’s all that matters in practice. Whether or not those grievances seem real or fair to you is almost irrelevant – and arguing about it is not going to work.

Step 4: Recognise equally that ‘giving in’ to every complaint is not going to work for you. (Or, ultimately, for the anti-clients either, but they may be too angry to understand that at first). You need to establish common ground where negotiation can take place – preferably before it gets to the level of active anti-client action.

Step 5: Establish the common-ground by identifying the ‘vision’ and values that provide the common-cause for every player in the extended-enterprise. (See slidedeck ‘Vision, Role, Mission, Goal’ for more on how to do this. Note that this is not a marketing exercise! In United’s case the Vision would be something like “safe, convenient, reliable travel”, with United taking a Role of “provider of medium- to long-distance travel by air”.) In effect, these define what quality means within the enterprise – and hence within your own organisation too.

Step 6: Compare and review the organisation and its procedures against those values and the vision – starting with any customer-facing activities, but eventually extending throughout every aspect of the organisation. This needs to be understood as a quality-review in the most fundamental sense: any improvements here will improve quality within the whole organisation and in its relationships with the broader enterprise – which should reduce the risk of creating anti-clients through carelessness.

Step 7: Use the vision and values as a rallying-point to connect with all of the organisation’s stakeholders on their terms, via the various ways in which they they themselves engage with the same vision. In general, this will not and should not be linked directly to the organisation’s marketing. (For an excellent example of how this can work, see The Responsibility Project, created and sponsored by US insurance company Liberty Mutual [more detail here].)

Step 8: Maintain an active watch on social-media, and wherever practicable engage respectfully with all actual or potential anti-clients. One of the most useful tactics to help you in this is to view your anti-clients as allies who can assist in keeping you ‘on track’ towards the ‘vision’ of the enterprise.

Repeat indefinitely. Doing this will not only help to pre-empt any potential anti-client problems, long before they cause serious damage, but will also improve your overall quality – and your bottom-line as well.

(This post was originally published on my now-defunct Sidewise blog on 25 January 2010, with the same title, ‘Who are your anti-clients?’. I’ve republished it here on the urging of several people, particularly Jack Martin Leith. Many thanks all!)

2 Comments on “Who are your anti-clients?”