Sometimes it takes a while…

Sometimes, as with trees, it takes a while for the results of our hard work to show…

Today I took the day off, and went for a drive around the area where I used to live, a few dozen miles to the south of here. The route took me past my old house at Drummond, so I stopped to take a look.

When I bought the place, in the late 1990s, there were very few trees there – only one full-grown tree on the entire ten acres of the upper block, and not many on the lower ten acres either. I set out to remedy that lack, planting and planting and planting.  Some three thousand trees in all, as I remember. Watering young plants every day in the drought. Checking the protecting bags hadn’t blown away. Off to the nursery to get another hundred plants. Again and again and again.

It could be a bit dispiriting at times: I lost many of the shoots and saplings to frost and drought and kangaroos. And when I left there in late 2006, there still wasn’t much to show for all of that work. On the upper block, none of the trees were more than shoulder-height, and all were scraggy, thin and uninspiring. All rather pointless, really.

Or maybe not, because it looks a bit different now: 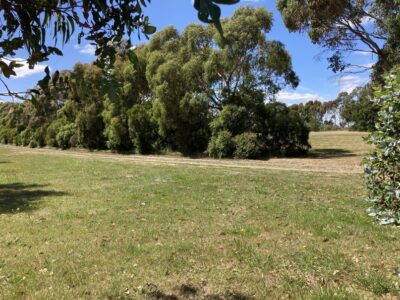 (Click on any image to see a larger-scale version.)

Other than a few obviously-younger trees, every tree you see here, from the foreground to the far background, is one that I planted maybe twenty years ago. Hundreds of them, just in this one view. And though they’re a long way from fully grown, they’re already everything that I’d hoped that they would be.

I don’t live there any more: they’re there for someone else to enjoy. Some sow, some reap. It’s always been that way. Yet we also only reap because someone else was willing to sow on our behalf, often many years ago. Each time we reap, we have a responsibility to sow anew, and also to repair around us each time we reap or sow.

It seems the same is true of ideas and tools – a practice of ideafarming, we might say. So too, maybe, for our desires and dreams, where our hopes for good harvest can be dashed to nothingness in a moment. In my own case, for example, every part of my plans for my return to Australia early this year were shredded by the pandemic, and had to start again almost from scratch: and that’s been true for so many of us in this bleak year, of course. Whatever it is that we farm, we need the resilience to keep going, keep going, keep going…

Keep planting, too. Some sow; some reap; some sow again. That’s the way it works. Sometimes it takes a while for the results to show – but they do show through in the end.

And yes, some of us do sow far more than we reap. We often don’t know why. Sometimes we don’t even know what it is that we sow. And yes, some of those who reap will only take, or forget to give back to those who sow: but that’s the way of this world too, and we have to find some way to work with that fact.

I was lucky today: for once I got to see the results of some of my planting. May you be likewise lucky in yours.