(Another example of How To Lose Friends And Infuriate People, no doubt, but this does have to be said.)

[Update: this post was a reaction to a tweet I received yesterday, but Mike T. (@miket0181) tells me that the IBM CBM described here isn’t new, in fact is apparently some years old, so my complaints on that regard are unfair. (Doesn’t help that IBM don’t put up any dates on their website-posts.) On that part, yes, I ought to apologise, and do – see ‘How to screw up in one easy lesson…‘. Yet the core critique still stands: it’s not a complete model, and potentially is dangerously misleading if used as the basis for a business-architecture. That’s my view for now an’ I’m stickin’ to it, anyways. 😐 ]

A couple of weeks back, as part of the ‘Patterns‘ section in the Enterprise Canvas series, I put up a an example of a variant of the Canvas which I said was definitely dysfunctional, all but guaranteed to be ineffective, and definitely not recommended – a kind of Taylorist-style model of the organisation and its (non-)relationship with its business-ecosystem: 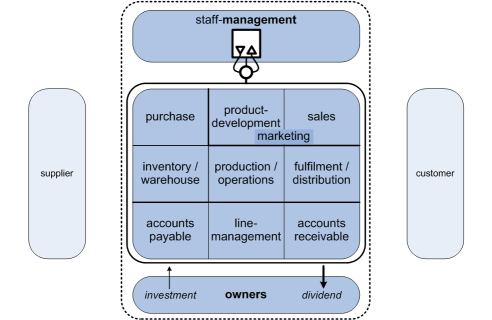 I said explicitly that it was a stereotype, almost a parody – a guide as to how not to view an organisation, with quality-management and coordination subsumed into ‘management’, and rigid separation between the organisation and its broader shared-enterprise.

I was quite certain that no-one would be daft enough to try to model any real organisation in that way. 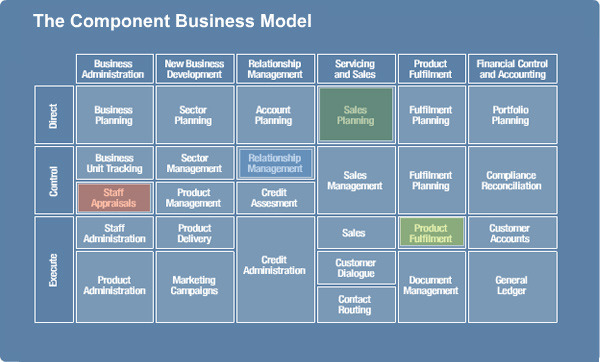 I’m going to have to be rude here, and describe this as a kind of ‘bastard child’ of Taylorism and TOGAF, combining many of the worst features of both and not many of their best. The one good item, and a definite improvement on TOGAF, is that the model does explicitly include People as well as Process and Technology:

Using the Component Business Model methodology, our consultants identify the basic building blocks of your business. Each building block includes the people, processes and technology needed by this component to act as a standalone entity and deliver value to your organisation.

But beyond that? – well, let’s compare it to Stafford Beer’s Viable System Model, which I regard as the minimum requirement for whole-of-business modelling:

In terms of the Enterprise Canvas model above, all it has is Staff-Management (what should be the guidance-services, but all scrunched up together in a nearly-unusable way), Line-Management (the Value-Management cell, blown up out of all proportion to its actual relevance) and, uh, Everything-Else…

In other words, there’s probably less than half of what’s needed to make sense of the organisation – but presented as if it’s the whole of it, much like TOGAF’s hopelessly-IT-centric model purports to be ‘enterprise’-architecture.

The four other worked examples are slightly better, but still dangerously incomplete: a Taylorist manager’s-eye view of the business-world, without any clue as to any of the glue-functions that hold it all together. You’ll also note that each one of those examples has a very different structure in its ‘horizontal’ axis – but no indication at all as to how it’s derived. Presumably only IBM’s own consultants could be considered competent to understand the ‘magic sauce’ needed to do this, and the rest of us mere mortals may do nothing else but bow down in awe?

What’s also irksome is that IBM have the temerity to present this as something ‘new’:

IBM’s Component Business Model is a new way of looking at your business. It represents the entire business in a simple framework that fits on a single page. It is an evolution of traditional views of a business, such as business unit, function, geographic or process.

Fact is that this is nothing ‘new’ at all: okay, it might seem new to IBM, but not to just about anyone else in ‘the trade’. We were doing it more than half a decade ago in Australia Post – certainly 2004, and probably earlier. It was only a Visio hack, but in business terms it proved straight away to be one of the most valuable artifacts from our Business Transformation team: just about every single manager in the whole organisation grabbed hold of their own copy and placed it, much annotated, above their desk. Since then I’ve done one or more of these models for just about every one of my enterprise-architecture clients: you’ll find a couple of (de-identified) examples in that VSM slidedeck referenced above, and in probably half of my other TOGAF-conference presentations over the past few years. I even published the instructions on how to build an ‘organisation-on-a-page’ map, complete with Visio templates, on my Tetradian Books website some two or three years ago. Aleks Buterman and his colleagues have had their own generic version – which they call an Enterprise Architecture Capability Map – up on their website for almost a year now. And it’s even built into some of the EA toolsets, such as Troux Metis, and, I believe, IBM’s own System Architect, and again has been so for years. So what’s ‘new’ about it? Nothing, frankly – other than the fact that IBM have finally cottoned-on to what the rest of us already knew anyway.

And I hate to think how much they charge for this ‘new’ approach… a lot, no doubt…

Sorry, folks, but I’d have to say I’m underwhelmed at all of this. Seriously underwhelmed. Oh well.