Warning: "continue" targeting switch is equivalent to "break". Did you mean to use "continue 2"? in /home/tetradian/apps/tblog/wp-includes/pomo/plural-forms.php on line 210
 On sensemaking in enterprise-architectures [1] – Tom Graves / Tetradian
↓ Skip to Main Content
Home › Business › Complexity / Structure › On sensemaking in enterprise-architectures [1]

On sensemaking in enterprise-architectures [1]

We know how to do sensemaking in enterprise-architectures; but why do we do it? What’s the purpose? What’s the point?

As a result of various recent proddings from Bruce Waltuck and Stephen Law, amongst others, I’ve finally gotten round to taking a more than just a cursory glance at Max Boisot‘s concept of information-space, or I-Space. It’s still only been a brief exploration, I’ll admit – a handful of academic papers, and a few I-Space websites. But what I’ve learnt even from that is just how radically different from mine is the problem that I-Space aims to address, in what might otherwise seem to be much the same context – and hence why the approach I’ve been using likewise needs to be radically different too.

Anyway, a warning: this is likely to be very theory-oriented, so it’s probably only relevant if you’re involved in the underlying theory of enterprise-architectures and suchlike. It’s likely to be very long as well, though I’ll probably split it into several parts, for everyone’s sake… 🙂

A brief overview of Boisot’s I-Space

In essence, and as I understand it, Boisot’s model aims to describe how information moves around and is transformed and used within ‘information-space’ – hence ‘I-Space‘. He maps out the transformations across three distinct dimensions: concrete/abstract, uncodified/codified (unstructured/structured), and undiffused/diffused. As described on the Trainmor website, this gives us a panarchitecture-like cycle of creation, renewal and re-use: 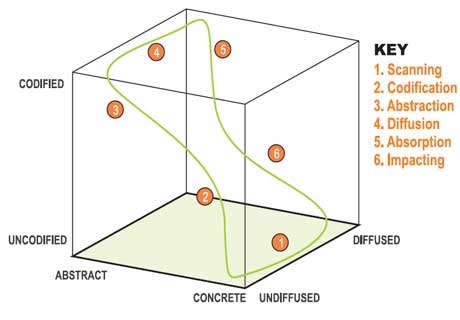 And as described on the I-Space Institute website, if we collapse that down to just two dimensions – unstructured/structured, and undiffused/diffused – we have what Boisot calls the ‘Social Learning Cycle’: Personal or ‘tacit’ knowledge is structured through sense-making and problem-solving; this is then ‘diffused’, or shared with others, perhaps via some IT-based ‘knowledge management system’; the shared-knowledge is re-interpreted by the individual; and applied in personal practice.

Boisot’s applications were primarily in economics, about knowledge-diffusion and the different dynamics of utility versus scarcity relative to that for physical goods, to enable maximum ‘value’ and maximum profit in information-driven industries. There’s also a great range of key ideas about organisational cultures as complex adaptive systems, with different cultures managing the structuring and diffusion of knowledge in different ways.

For enterprise-architecture, all of this has obvious applications and implications in information-system design, and in encouraging adoption of EA principles and practices with the organisation.

Yet I’m not sure that it has all that much validity for enterprise-architecture itself. It fits well with the larger picture, with the overall flows, with modelling a culture as a whole. But in my own experience of enterprise-architecture, all of that is what happens after the critical moments of change – and in some ways this type of theory actually prevents us from being able to work with or even to see those moments of change.

To use the SCCC-categorisation, this is what I’ve been describing as the difference between the Complex and the Chaotic – the unique, the particular, the ‘market-of-one’ that occurs at the exact moment of sale. Boisot and the like will obviously handle the Complex well, because that’s what they’re designed for and optimised for. But to me they don’t fit well with uniqueness: and that’s what I’ve been struggling with all of this time, always looking for some theoretical-frame that would describe it properly.

To explain why this is needed, and to explain what’s going on here, I need to do a brief diversion into some of my own background.

A bit of background

Some of my own personal history is relevant here. Both my parents were GPs, or general practitioners – ‘family doctors’, in US-speak. The practice was on the edge of a large town, not all that far from London, but extended right out into into farming-country. And I mean rural, too: when I was kid, back in the 1950s, there was still quite a lot of horse-drawn traffic, and the village carpenter was also the blacksmith and farrier, making and fitting horseshoes for working carthorses, and fitting steel-tyres to wooden cartwheels.

The surgery was built into the family home, so I grew up in a very busy, very active medical background. And along with that, I learnt a lot about the role of the generalist: a specialist in hospital might see a fair few variations on a specific theme, perhaps, but a general practitioner is a key first-point-of-contact for medical needs, and hence comes across everything.

For example, there was the farm labourer who’d been bitten by a cow whilst trying to remove a lump of turnip from its throat, and had become infected with anthrax – not all that rare in cattle at that time, but for humans it’s a disease that’s classed not just as a bio-hazard but as a biological weapon. That one was definitely, uh, interesting…

There was a woman who’d called on a Sunday to say she’d had a minor scratch from a rose-thorn, nothing to it as such, but was feeling oddly unwell: my mother never did find out what had happened there – some allergic reaction, probably – but if she hadn’t got her into hospital straight away, it was clear she would have died before the regular ambulance arrived, less than hour later.

And there was the case of an elderly woman with a supposed terminal stomach cancer, sent home to her family to die in peace: some discreet enquiries identified the real nature of the ‘cancer’, which uh, cleared itself after a few sessions with a powerful laxative… and she went on to live a happy family life for another two full decades.

So yes, a true generalist will come across just about anything you can think of; and has to be ready for anything, too. The point here was that whilst mainstream medical practice was always focussed on statistics and probabilities and the like, those kinds of ideas and assumptions weren’t all that much use at the ‘sharp end’ of general-practice: diagnosis needs to deal with this patient, right here, right now – and no matter how much it might look the same as everything else, it’s always subtly different, every time.

For me, another influential item from that background was an item in a now-defunct medical magazine, World Medicine. The article, ‘Ulbricht the Badger’s Guide to Immunology’, was a nice allegory on the relevance – or perhaps lack of it – of medical research on medical practice. I won’t go into the detail of the story itself, but one part that’s stuck with me ever since was this: we actually understand extremely well why people fall ill; what we don’t understand is why people don’t fall ill – and even less why, or how, they get well again when we don’t expect them to do so.

Then, for me, on to university. Again I’ll skip the details, but one theme that came through all of that period was exploring how people develop individual skills, and develop the personal sensitivity, awareness, judgement and ‘taste’ on which that skill is based. I did my Masters research and thesis, in the ‘General Studies’ department at London’s Royal College of Art, way back in ’76 (yikes! more than a third of a century ago! 🙁 ) on “Design for the education of experience”, the use of different media to support skills-development. (Video was by far the worst medium for this, by the way.) Some key ideas came out of this, such as the crucial distinctions between ‘methods’ – what we do – versus ‘mechanics’ and ‘approaches’ – respectively the objective and subjective components of the skill, from which personal methods are derived.

And my test-case for that Masters-research – which, somewhat surprisingly, went on to become a best-selling book that’s never been out of print since – was a detailed description of how to develop the rather arcane yet very practical skill of water-divining (US: ‘water-witching’). Technically, it’s almost a ‘pure skill’, in that there’s almost no mechanical component to it: almost all of it is about sensitivity to context, awareness, interpretation of results. Otherwise known as sense-making and decision-making, all in a real-time context.

[A later book of mine that focussed more on sensemaking was Inventing Reality, first published in 1986. See the chapter ‘Can’t we explain this scientifically?‘: it introduces some of the core themes that underly SCAN.]

So how does all of that connect with enterprise-architecture?

Lots, is the short answer.

At every moment of sale is a market-of-one, something unique. Every interaction with customers, clients, suppliers, employees, has a moment of uniqueness about it. Something special, that in turn makes it special.

And if we get this right, there’s a huge premium for uniqueness.

By contrast, there’s not much of a premium for doing the same as everyone else. In a commercial context, if we don’t have something that really is unique, that helps us stand out from the crowd, often the only thing we’re left with is a race to the bottom. Which is not a fun place to be.

But uniqueness? That’s whole different kind of ‘hard’. And one where, by definition, statistics are no help to us at all – because it’s unique. And likewise where and why Boisot’s I-Space and suchlike are of little real help to us – because they don’t work well with the unique.

So how do we get the right balance between certainty and uniqueness – between the Simple and the Not-Known? That’s what’s been my real driver here.

And that’s what I’ll continue with, in the next post in this series.

For now, enough to whet your appetite for more, I hope?

2 Comments on “On sensemaking in enterprise-architectures [1]”