The Cloud is in the cloud

This one’s another follow-up from the model-development session with Stuart Boardman last Friday, and relates to a different way to understand the often over-hyped Cloud.

[I hasten to add that most of what follows is just a minor elaboration on an original idea of Stuart’s, which formed part of his presentation to the Cloud track in the Open Group conference in Cannes back in April this year. The real credit for the ‘cloud within the cloud’ concept is Stuart’s.]

It’s probably unlikely now that any business-folk or IT-folk – let alone any enterprise-architects – have failed to hear all the hype and buzzwords around the concept of ‘the Cloud’ – as in the many assorted variants of what’s commonly described as ‘cloud-computing’.

There’s so much hype about Cloud that it’s often quite hard to see that in many ways it’s nothing new. As Gartner’s Andrea di Malo complained the other day, ‘Why do people keep treating Cloud as something special?‘ – because in reality it’s little more than a long-established design-pattern, going right back to 1950s leased-line ‘electronic data-processing’ and the like. Sure, it’s a different kind of scalability, and offers a much broader range of access-methods, but otherwise that’s about it.

The real giveaway clue, though is in the terms that are used for the various different modes or forms: information-as-a-service, software-as-a-service, platform-as-a-service, and so on. They’re all services.

And the crucial point is that in a service-oriented view of the enterprise – such as I use in modelling with Enterprise Canvas – everything is or represents a service. In that sense, Cloud is, well, just another kind of service, really. It has its own specific quirks, just like every other type of service – but in essence it’s just another service.

So why all the hype?

No reason at all really – other than that it makes a good sales-pitch that sells stuff, I guess?

But if we drop the jaded cynicism of the long-experienced industry-watcher, what we see is this:

In other words, Cloud is just one more cluster of services within the overall cloud, conceptually little different from other services that the organisation might access through outsourcing-relationships – such as electricity, cleaning-services, legal-services and catering-services. They’re all just different kinds of services – preferably interoperable, and preferably interchangeable if need be, too.

[Kind of ironic that the small subset of the services-cloud that is the IT-based Cloud is the part that gets aggrandised with the capital ‘C’, whereas the real overall services-cloud doesn’t – but that’s the IT-industry’s infamously-myopic self-importance we’re dealing with here, after all…]

In that sense, the much-vaunted Cloud is just another cloud within the cloud – the real cloud of shared or shareable services, or, as Stuart puts it, the overall business ecosystem of which our own organisation is itself just one small part. Or, to put it in more visual form: 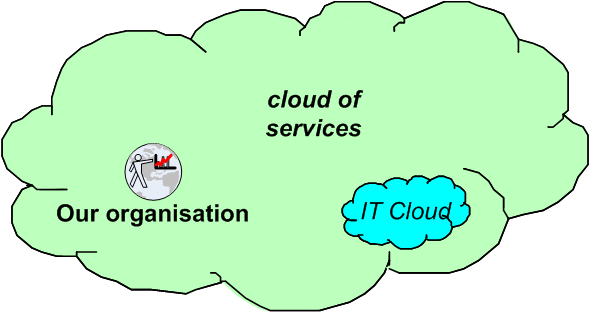 But there’s one more point we can see from that bullet-list above, which is really important from an enterprise-architecture perspective. And that’s that, like any other outsourcing arrangement, Cloud usually sits outside of the organisation’s boundary-of-control. Which is not the case with the classic internal ‘IT department’: that’s definitely inside the organisation’s boundary-of-control.

Which means that the moment we port anything onto the Cloud, it literally moves beyond our control. Sure, we can give ourselves the illusion of control, through contracts and the like: but we may soon find that those contracts aren’t worth the paper they’re (not) written on – especially when we hit up against the nightmare tangles of national jurisdictions and the rest…

As with any other outsourcing-arrangement for provision of services, the nearest we’ll get to ‘control’ with Cloud is some reasonable form of influence with the service-provider, in which trust – so often noticeable only by its absence – becomes the only thing that’ll hold it all together. Tricky, that…

Which means, in turn, that before we go anywhere near Cloud, we need to have some very clear ideas about governance – about who really holds accountability and responsibility, both within the organisation and beyond, and how all those responsibilities will be maintained within the messy realities of real-world practice.

In short, the Cloud within the cloud is no perfect panacea: it’s just another class of services, with everything that that implies. Everything – including governance, architecture and the rest. We forget that fact at our peril…

3 Comments on “The Cloud is in the cloud”