Working with ‘I don’t know’

I had some useful first-hand experience with this earlier this week. Some while back, I’d been asked to do a seminar for a research organisation, based on my talk at the Integrated EA conference last year, on ‘The Enterprise As Story‘. Yet talking with the seminar-host about a week or so before the seminar was due, we decided to change to another topic I’d also suggested, about dealing with the feeling of “I don’t know”. So, to make it more realistic – but also more challenging for myself – I didn’t do any of my usual somewhat-overkill of preparation: instead, I went in to the session deliberately not knowing what I would do.

Actually, that’s not quite true. 🙂 I’d arrived rather too early in town – having perhaps-wisely made too much allowance for the joys of English weather – and sat in a cafe, quietly panicking about what I’d let myself in for. In doing so, I realised that some of the people there might panic even more if I turned up without any visible plan: so in the last half hour before going back up to the site, I scrawled out this mindmap on a large sketch-pad: 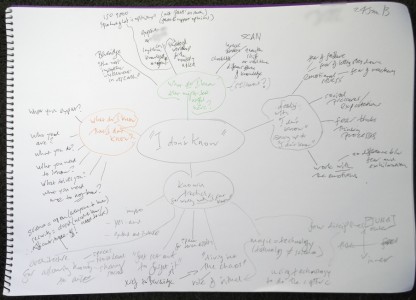 The two-hour session that followed was, in essence, a nice real-time and real-life example of improvisation for the enterprise-architect. 🙂 We rambled around most of that mindmap, though also with quite a few contextual examples and side-digressions. And although it’s not ‘complete’ in the sense that a Powerpoint slidedeck would be, it’s probably worth summarising the content there, because it might be useful for others who find – or place – themselves in the same kind of situation.

There are a few items in the mindmap that emphasise the context of this specific research-organisation, but otherwise it’s probably (re)usable as-is. As you’ll see, there are four main sections, and I’ll describe the content of those sections roughly as per the mindmap, but do note that much of what actually happened in the session came up in a much less ‘ordered’ way!

The next section I worked on in the mindmap was “What do I know that might be useful here?” – book-references, past-experience and so on, for this kind of business-context:

Over on the right-hand side of the mindmap, a focus more on feeling than thinking, around “Dealing with ‘I don’t know’” – facing up to the fears around “I don’t know”:

And down at the bottom of the mindmap, in perhaps even more of a random scrawl, some notes on “Known tactics for working with ‘I don’t know’” – and some themes that arise from that:

That’s about it for the mindmap. It worked. 🙂

Hope it’s useful for someone, anyway!