This one’s a quick item of technical detail about service-modelling with Enterprise Canvas, as requested by Oliver Baier:

The quick answer that I gave Oliver on Twitter was as follows: 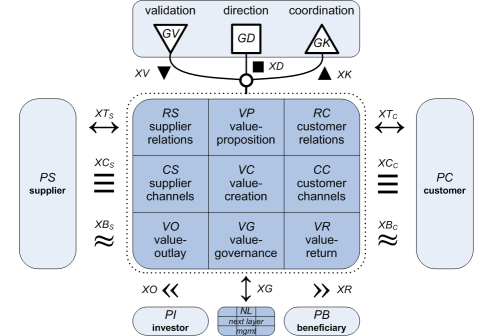 In the classic Taylorist view, system-5 remains the exclusive preserve of ‘the owners’, and everything else other than system-1 service-delivery is conflated into a hierarchy of system-3 ‘management’ The system-2, system-3star and system-4 services are all blurred together and merged into an expanded yet often ill-defined system-3; the XV and XK-flows are all merged into the XD-flows, or deemed not to exist at all. In effect, the XD- and XG flows are then regarded as conceptually identical, rolling downward through the management-hierarchy, which is partly embedded within yet also somehow separate from any aspect of service-delivery itself:

This does sort-of work if (but only if) we’re modelling a segment of a system or service where the flows consist solely of information, and where system-4, system-5 and even system-3star are in effect handled entirely ‘outside’ of that part of the system, with no direct connection with this service at all – such as can occur with IT-based automation, for example. In those cases, the respective XD- and XG-flows are essentially the same in structure, and can even be largely the same in their content, too.

Once we move outside of that narrow constraint, XD- and XG-flows can differ a lot:

Crucially, XK and XV-flows here are not conflated into the XD or XG-flows:

I hope that makes sense?