Sometimes the small details do matter

It was the presence of the big-lens cameras that caught my eye, I guess…

I’d just finished a great meetup in London yesterday with enterprise-architect Stuart Boardman, talking about the This-game, SCAN and requisite-variety, and their relation to Cloud and outsourcing. (Yeah, I know, hardly exciting for most people, but there ’tis. 🙂 ) So there I was, wandering around in the back-streets of Soho, looking for something suitable to eat.

And then I noticed them. Over on the far side of the road, a gaggle of photographers, and other folks with their smartphones at the ready, all crowded around a couple of girls who were seated outside an upmarket sushi-joint. Interesting: take a look.

Nobody visibly famous: hence not just the London paparazzi doing their usual rounds for the tabloids. More interesting, then: look closer.

Yep, the girls were photo-models, of course, doing their all-too-predictable posing bit for the professionals. But it didn’t look like the usual food-shoot: kind of like they weren’t looking at the meal, or at each other, but at something else, between them and the cameras?

It took me a moment or two to see – and hear – the real reason for the photo-session: a small quadcopter, buzzing away to itself, carrying a plate of sushi or some-such on its back for delivery to the ‘customers’. 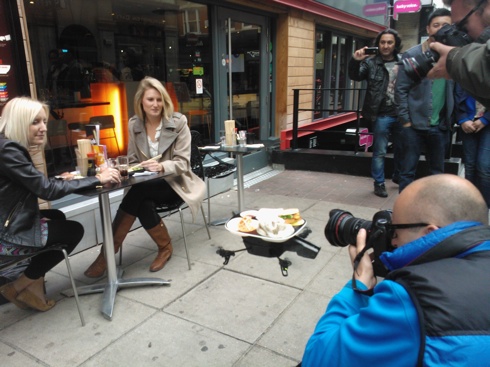 But it was then that I noticed a small detail about the quadcopter itself, and winced. Oops… 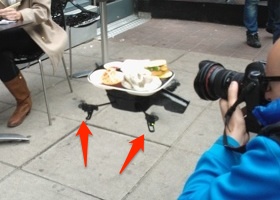 Open-blade propellers. No guards. An accident waiting to happen…

Sure enough, it happened. The guy steering the quad via his iPad didn’t get it quite right, one of the photographers got just a bit too close, and the nearest blade brushed against his leg. Instantly the motor stops, the quad falls out of the air, the plate goes flying, food spilled everywhichway. No real damage done, but a right old mess. Oh well.

(They were lucky, though. Those blades move fast, and they’re sharp enough to cause a nasty gash on an unprotected arm or hand – as it probably would have done to one of the girls if the quad had managed to make it to the table. Ouch indeed…)

Sure, the choice to use an open-blade rather than guard-blade quadcopter was just one small detail. Perhaps that type was the only one available that could carry enough weight – or maybe it was just the first quad that the marketing-guy came across on the toy-shop shelf. Yet it was that one small detail that kinda wrecked the whole gimmick, and made it the mess on the floor – rather than the fun ‘flying food-tray’ – as the image that everyone would take away as their memory from the event.

Which is why, as enterprise-architects, we keep going on and on about Just Enough Detail. We always need to keep the big-picture in mind, yet sometimes we do need to do a deep-dive down into some part of the detail. We can’t know in advance which detail it’ll be, or even where at first to look: but we know it’ll be down there, somewhere, ‘hidden in plain sight’ – and it’ll be crucial to the success of the whole story. But which detail? – well, you just have to kinda know how to know, y’know? It’s a kind of instinct, a ‘nose’, a feel, that architects have to learn how to learn somehow, over years and years of practice. The reality is that there’s no quick or easy way to do this: it really does take years to learn how to do Just Enough Detail just right. Or right enough to do the job in hand, anyway.

2 Comments on “Sometimes the small details do matter”