The gift of a world

It’s heavy – that’s all I can tell at first. Slowly, carefully, I unwrap the present my great-niece has given me. It’s a small wooden box, with brass hinges and fastener, and with my name inlaid on top in green and white felt. Made it herself, she did, in woodwork class at school. Very proud of it, she is – and I’m proud of her skill, too. Not quite sure what I’ll do with it, though…

Today is the last of the ‘twelve days of Christmas’: the season of the gift. Yet there’s always much more to the gift than just the thing itself: as with every system, we pull on one part, and a whole other world turns out to be attached to it – family, culture, society, economics, relationships, responsibilities, the rest…

Which, when we scale it up all the way, brings me to this question:

— Collectively, we’ve been given a world. What should we do with it?

This has been highlighted for me several ways over the past few days. One was a reminder of the iconic ‘Earthrise’ images from the Apollo missions, such as this one from the Apollo 10 mission: 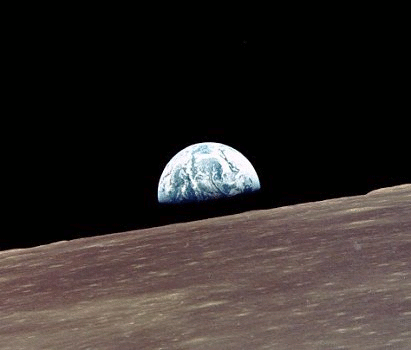 A small blue pearl, all but invisible in the greater scheme of things – and yet, apart from those few stumbling steps into the blackness of space, every moment of human history has happened there. Every hope, every fear, every drive, every empire, every fleeting ‘possession’, every fleeting life – all encapsulated in that one tiny gift of a world.

Another view on this came up for me on Christmas morning, in a brief stream of tweets from my colleague Stuart Boardman (@ArtBourbon):

A bit harsh in some ways, perhaps, yet overall I do strongly agree with him there. At the very least, it should be clear to everyone by now that we can’t keep on going as we are – not for much longer, at any rate. As warned about, in fact, in a well-known if variously-attributed quote:

Given that, one word really jumps out for me from what Stuart said in those tweets above: responsibility. That’s the other side of the gift – because to respect the gift, and the giver, we need to be responsible about it, responsible for it, responsible with it.

World as gift: what responsibilities does that imply, for each and every one of us?

For some people, it’s maybe even a matter of religion, a religious duty. And even if that means nothing to us, there’s still a human responsibility here: at the very least, we’ve been given this world by our forebears, and there’s a real sense in which we do need to respect their hopes and fears, their joys and their struggles, as they did what they could to make it ‘a better world’, as they best understood it, before passing the baton on to us. And likewise, we hold it in trust for future generations: what will they say if all we bequeath to them is a ruined world – which is where we’re headed right now?

It’s a gift, sure; but it’s not a gift in the sense of a short-term ‘possession’, a throwaway toy. Instead, it’s more a gift to all of us, from all of us: it belongs to humanity as a whole, and more, throughout all time. That responsibility does need to be remembered here – and all that that responsibility implies.

It’s a world: the gift of a world. It’s the only one we have. It’s our home. It’s also our responsibility.

That’s what I mean by the term ‘enterprise-architecture’.

Everything less is just detail, really… 🙂

2 Comments on “The gift of a world”