This one came through from a colleague on the Twitterstream a couple days back, presumably somewhat channeling John Lennon:

And yeah, it’s a concern (complaint?) I get a lot about where I’ve gotten to so far in RBPEA (Really-Big-Picture Enterprise-Architecture): all this talk about ‘no possessions’ and suchlike, but where’s the plan?

Short answer: it’s way too early yet for anything resembling a ‘plan’.

I’ll admit it gets a bit frustrating for me at times: people assume that because I’m talking about major social change, I must therefore have some kind of ‘perfect plan’ already to go. I don’t – and, to be blunt, I wouldn’t be so arrogant as to claim that I have (although, sadly, many seem to claim that they do…).

I see my role as that of an enterprise-architect. Nothing more than that. My job is that of decision-advisor, not decision-maker. I don’t have any ‘right’ (there’s that word again) to define plans: that’s the responsibility of all of the stakeholders in an architecture, working together – which, in this case, is pretty much everyone, everywhere across the globe, which isn’t happening much as yet. What I do have the authority to work an, as an enterprise-architect, is identifying concerns and constraints that would and must apply to any viable plan at this Really-Big-Picture scale. Hence that’s all I’ve done so far.

It’s a bit like the relationship between business-plan and business-model: it’s premature to define a plan when there’s not enough clarity around the business-model. That’s exactly how many businesses fail: they leap off to execute a plan before they understand their own business-model. Or, in many cases, even have a business-model on which to base a viable plan.

Architecture alone is not the answer (and, even less, ‘The Answer’). Whatever the scale, Big Design Up Front rarely works well: it tends to give us the worst of both worlds, a Grand Plan that may look great in theory, but in practice is riddled with untested or unacknowledged assumptions. At the RBPEA scale, history is way too littered with such Grand Plans that turned out to be Great Disasters. Not A Good Idea…

The alternative to Big Design Up Front is experimentation to identify real-world concerns and constraints that might have been missed – hence the value of and necessity for pivots on business-models. The catch here, at the RBPEA scale, is that it’s kinda difficult to do a pivot across an entire globe. And we also don’t have much time to set up a literally fundamental change to our business-model (aka ‘politics and economics’) at a literally global scale: current estimates would suggest that it needs to be fully complete, world-wide, within not much more than a century, if what we know as ‘human civilisation’ has much of a chance of survival at all.

(If a century sounds like a ‘No Worries’ kind of timescale, bear in mind that current possessionist economics developed slowly from a handful of localised mistakes to the current dominant ‘globalisation’-economics over a period of around 10,000 years: in other words, one hundred times slower than the timescale we’re looking at here. At global scales, this is about as Agile as it’s possible to get… with literally life-or-death stakes in play if we don’t get it done in time.)

In short, we whilst there will no doubt be many, many local variations, we simply don’t have time or budget (in any sense of the term) for much in the way of pivots: we need to get the core constraints and concerns pretty much right first time. And it is possible to do that with a lot of careful (and fast!) thought-experiments, cross-disciplinary studies and cross-checks about what we know of the respective context – which, in this case, is human development and human interaction. Hence using architectural assessment to identify concerns and constraints is not ‘Big Design Up Front’: it’s merely a necessary precursor to identifying categories or classes of human interaction that are know to be viable and sustainable over indefinite timescales at any scale, and thence for viable and sustainable ‘business-models’ at large scale. Other than for a localised experiment, specifically to test some hypothesis about a concern or constraint, ‘Show Me The Plan’ is a long way down the track from there…

What’s come up from all of the RBPEA work so far is that there is no way to make a possession-based economics sustainable. It can’t be done: to simulate sustainability, its structure mandates a ‘pyramid-game’ of infinite-growth – which, on a finite planet, is by definition neither sustainable nor, eventually, viable. To put it bluntly, if we try to keep much longer on what we have as our current global ‘economics’, we’re dead.

Right now, there are lots and lots and lots of people tweaking away at the detail-layers of current economics and politics, hoping that that alone will be enough. Blunt fact is that it won’t, because it’s not the details of the economics that need to change: the problem is that its deepest foundations don’t work. Or, in visual form: 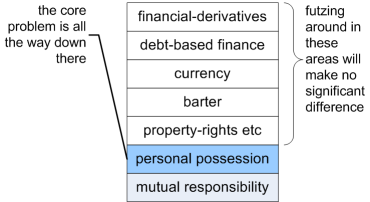 So let’s go over it once again:

The common factor here is that all of those concerns that people most usually focus on – financial-derivatives, debt-based finance, currency, barter and ‘rights of possession’ – are built on top of possessionism.

Which is a two-year-old’s view of the world.

Which is is non-sustainable and non-viable in the real world.

Which is why – we hope – we can help two-year-olds to grow out of it.

So if we ask ‘Where’s the plan’ in terms of RBPEA and the like, there are a few things we need to understand, that Reality Department makes clear are inherent, inevitable and non-negotiable:

Or, to put it the other way round, at RBPEA scale any plan that fails to address and resolve the dysfunctions of possessionism is merely futzing-around with deckchairs on the Titanic: 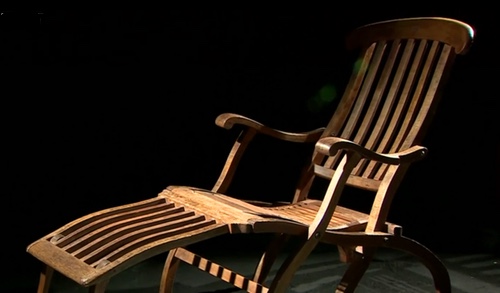 Tackling possessionism, and reframing global economics and politics around non-possessionist mutual interlocking responsibilities, is going to be non-trivial. (Understatement of the year?)

But we don’t have any choice, because anything that includes possessionist assumptions – such as financial-derivatives, debt-based finance, currency, barter or ‘property-rights’ in the sense that they’re usually understand at present – will inevitably lead us back to posessionism, which is inherently non-sustainable, and hence inevitably non-viable over the longer-term.

And we don’t have much time to address this.

Especially as it must be total, at a literally global scale, with no exceptions at all – otherwise, once again, possessionism is infective and addictive, hence allowing it in any form inevitably leads us back to possessionist-economics, which is inherently unsustainable and inherently non-viable.

Hence if your plan is to be viable and sustainable, it cannot include any possessionist assumptions. Period.

To make a plan viable, it must drop the possessionist assumptions. Period.

Which, given that possessionist assumptions pervade pretty much everything we know, is likely to be kinda hard…

The alternative is to go one step deeper, below possessionism, to the root-level interlocking mutual responsibilities. For a viable, sustainable RBPEA, we literally have no choice but to reframe every possessionist assumption in terms of the mutual interlocking responsibilities that actually make that interaction work, across an entire globe, and across all time. And make it all work, easily, smoothly, pretty much without any kind of pivot, because we don’t have much time left for anything else.

And you tell me you’re expecting just one person – me, on my own – to come up, right here right now, with a ready-made ready-to-go-for-everywhere plan for all of this?

5 Comments on “RBPEA: Where’s the plan?”