Many organisations talk about ‘developing new leaders’. What they mostly mean in practice is ‘developing new managers’. Which is unfortunate, because they’re not the same…

The blunt reality is that most organisations I see have an absurd surplus of managers, but a desperate shortage of leaders. To which the organisation responds by creating yet more managers, who believe themselves to be ‘leaders’ because they are managers.

The core difference is right there in the job-description: leaders lead, whereas managers merely manage.

What managers manage are resources of various kinds: things, time and budgets, for example – the latter mostly to cope with the dysfunctions and delusions of the money-economy.

(Managers have an unfortunate tendency to regard everything as ‘resources’ – including people.  This is Not A Good Idea…)

Don’t get me wrong: managing resources is an important service to provide to a work-team or whatever. Yet if we look at it in Enterprise Canvas terms, the role is kind of ‘external’ to the service that it manages: 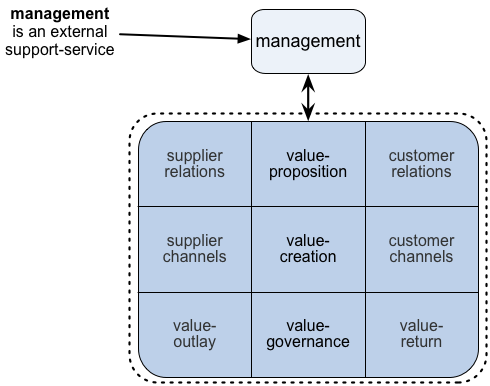 And when we map manager-roles onto the Five Element cycle, what we find is that managers sit as a kind of appendage to the actual work of each phase. To be more specific, just a subset of the Five Element phases: 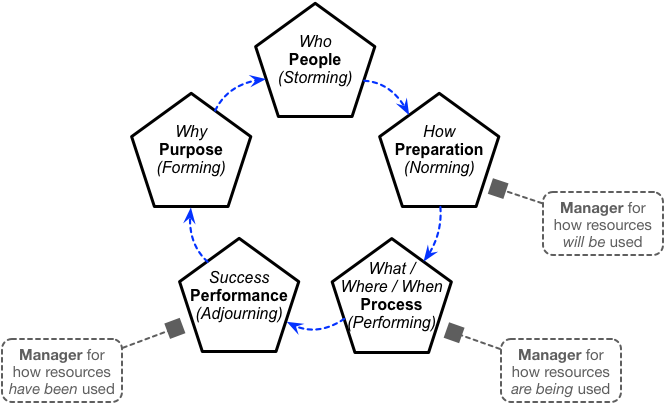 That’s it. Not all that much, really.

(Important, yes, but not that important. Certainly not as important as it’s made out to be, anyway.)

Managers keep things predictable, safe, certain. That’s their nominal task – and yes, many are very good at it.

Which would be fine, if the real-world actually worked that way.

Which, these days, it increasingly doesn’t.

By contrast, leaders lead. We need leaders to guide the process of change, at every scale, from the smallest (a single step in a business-process) to the largest (the purpose and strategy of the enterprise as a whole. And sometimes beyond even that. In Enterprise Canvas terms again: 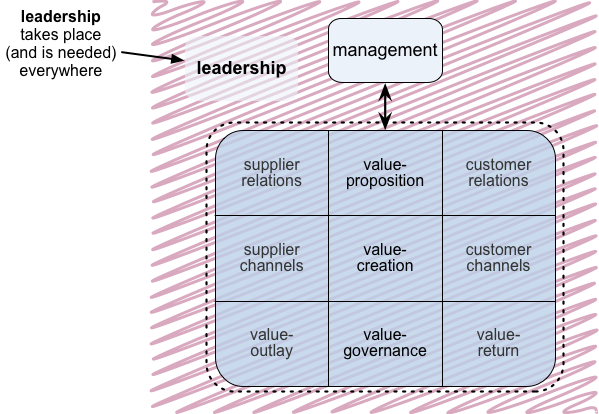 We need leaders within every phase of the Five Element cycle, to guide the action when we focus on Purpose, People, Preparation, Process or Performance: 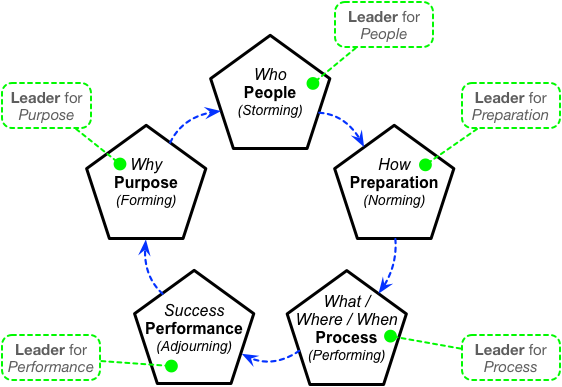 We need leaders between each of the Five Element phases, to guide as to when to stop working on the activities of one phase, and move on to the next: 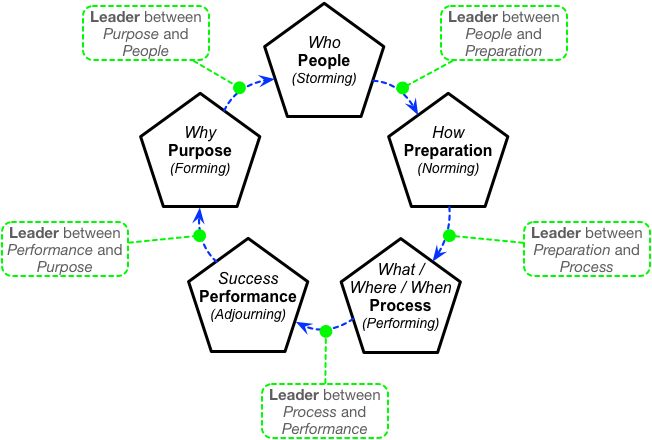 Perhaps most of all, we need leaders who can maintain the awareness and the balance across all of the Five Element phases and cycles, and cycles-within-cycles, again at every possible scale: 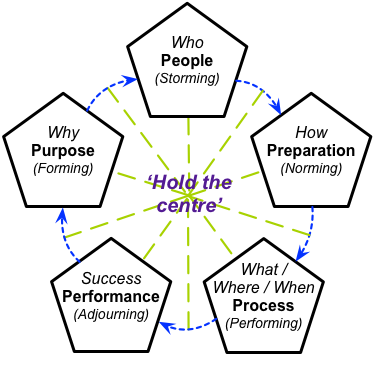 And crucially, leaders do all of this by focussing on people, and as people – not as ‘Human Resources’ or worse.

True, some managers do act as leaders – but it’s not in the job-description as such. And what leadership they do tends to be in their comfort-zone of the thinking-oriented phases of Preparation and Performance – not so much in the real-time action of Process, let alone the scary, people-centred, feeling-oriented work of the Purpose or People phases:

They won’t do much of the leadership between phases, either – not least because that would usually mean treading on some other manager’s turf at one or other end of the ‘between’. And in part it’s often also because they wouldn’t get any credit for doing it, because in the largely-undocumentable, largely-untraceable ‘between’-space, where ordinary performance-metrics by definition make no sense.

Another relevant point for this is that management is what business-schools teach. With very few exceptions, they don’t teach leadership – at least, not in the sense that has such meaning here. In part that’s because most of the manager’s tasks can be learnt in the classroom, or via an online training-course. But leadership? – no, the only way to learn leadership is on the job, the hard way, year after year, until we know how to instil the trust and commitment in those we lead – including ourselves.

In most cases, MBA-trained managers seem to aim for stasis, to work against change, to remove all uncertainty wherever possible. Classic Taylorism, in other words.

By contrast, leaders must work with change. That’s the whole point about the activity, after all – that it’s always about change, if only in the sense of leading from one activity to the next.

In a Taylorist world, what we need most are managers – whereas leaders, by definition, represent uncertainty, a risk, a threat.

Yet in a post-Taylorist world, where disruptive change is pretty much the New Normal, what we need most are leaders – real leaders, that is, not merely mislabelled managers.

Without real leaders, managers tend naturally to sort themselves into rigid hierarchies, each defiantly defending their own patch of turf, their own share of resources to manage. That works well enough when the respective business-world is stable, changing only in the routine reshuffles of ‘restructuring’.

But when the world turns unstable, the managers’ hierarchies become a principal brake on the flexibility that we need in order to navigate change. And the managers’ vaunted skill with managing resources may well be rendered redundant compared to the abilities of a skilled leader to elicit needed resources from just about anywhere – seemingly by magic at times.

So when you need managers, create new managers.

And when you need leaders, create new leaders.

And most managers don’t lead, whilst it’s probable most leaders won’t manage – so don’t mix them up!