Another SCAN crossmap – this time with the Kolb Learning Styles model – that may well be useful in the knowledge-management and skills-development-space. It was first spotted by Archi co-developer Jean-Baptiste Sarrodie – many thanks, JB!

I’ll let JB set up the background to this:

I recently had what we call a “train the trainer” training recently and discovered the Learning Style Inventory in its simpler description:

To be honest it was in French and there might be some slight differences but anyway…. when discovering this I was thinking: that’s the SCAN!

JB then describes the crossmap as follows:

In visual form, that would look something like this: 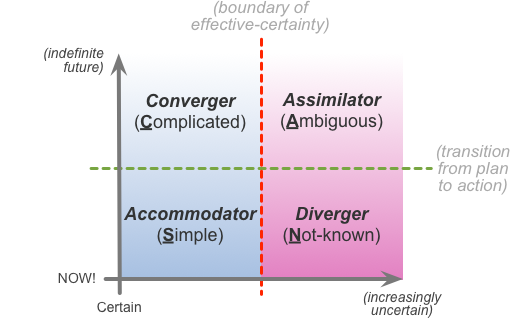 Or, if we add the further crossmap to the sensemaking/action modes and disciplines (Believer, Scientist, Technologist, Artist) from the swamp-metaphor: 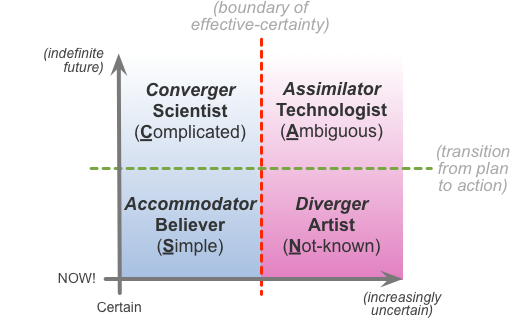 Though as JB continues:

That’s not a perfect mapping of course but that seems to really make sense (at least with the French definition I had). My thought was that depending on our learning style, it might be more or less easy for someone to do an Architecture work in the real EA sense: too many “engineers” and too few “philosophers” and “social workers”…

Yet there are a couple of additional insights we can draw from this crossmap.

One is that Kolb’s model was originally not so much about learning-styles as a mapping of the learning-space. To quote the Wikipedia article, “the ideal learning process engages all four of these modes in response to situational demands … In order for learning to be effective … all four of these approaches must be incorporated”. This aligns with one of the core points in both SCAN and the swamp-metaphor, that all of the modes or domains or whatever-we-want-to-call-them will occur and/or be needed in order to provide complete coverage of any given context. It’s not that one style is ‘better’ than another, but more that each is either more or less appropriate in different aspects of the context. The catch is that people do indeed tend to settle into one or two preferred styles – so to cover the whole needs for a context, we’re likely to need a balanced team that between them do cover the entire set of learning-styles.

And (quoting again from the Wikipedia article) “[the learning-styles] form a learning cycle from experience [Accommodator] to observation [Diverger] to conceptualization [Converger] to experimentation [Assimilator] and back to experience”. This gives us some suggestions about how the focus will need to shift between members of a balanced team, that each have different preferred emphases in the ways in which they interact with a context.

But we might also notice that there’s a contrast here to the classic scientific-development cycle of ‘Idea -> Hypothesis -> Theory -> Law’:

In the Kolb crossmap above, the cycle forms a more figure-of-eight pattern, from experience that would sit kind of somewhere between  ‘Law’ and ‘Idea’, to a more observation-oriented version of ‘Idea’, to conceptualisation that sits kind of between theory and hypothesis, to testing via experimentation that’s somewhere in the middle of everything. Which kinda suggests that the crossmap isn’t as exact as we might like – that there’s probably a dimension missing in the crossmap, in fact. Or that the cycle we need to explore connects the modes together in a different way entirely – much as in some of the other crossmaps between SCAN and John Boyd’s ‘OODA-loop‘, ‘Observe, Orient, Decide, Act’: 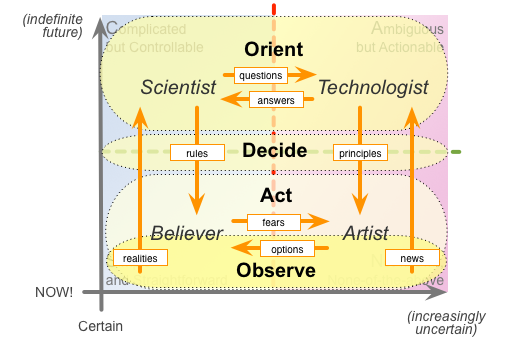 But it’s still close enough as a crossmap to be useful for triggering insights and suchlike. Which is the point of the exercise, after all

So my question is: is it on purpose?

To which the answer, in typical architecture-fashion, would have to be ‘It depends‘… 🙂

If by ‘on purpose’ we’d mean “Does the crossmap indicate that the apparent connection between the models is intentional?”, the short-answer is ‘No’. There’s a correlation of sorts, yes, but to use the old phrase, ‘correlation does not indicate causation’. I’d probably heard of Kolb’s learning-styles model before I developed SCAN, but it wasn’t a conscious part of its structure; and since Kolb’s model predates SCAN by several decades, the reverse wouldn’t apply either. In short, it’s just a correlation – nothing more than that.

But the point is that it’s a potentially-useful correlation. For example, as JB notes above, we can use this crossmap to warn us that we may have “too many ‘engineers’ and too few ‘philosophers” and ‘social workers'” on our architecture-team, and that we need to bring the team’s mix of learning-styles into better balance. If we do that, then the crossmap would indeed be ‘on purpose’ for what such crossmaps are intended to do – namely to provide visual anchors and triggers for useful insights and actions.

Once again, though, each of these SCAN crossmaps is just a correlation – nothing more than that. A potentially useful or insightful correlation, yet not necessarily one with any real causal relationship behind it – and unlike with certain other sensemaking frameworks, we do need to be careful not to delude ourselves into thinking that such a correlation inherently implies some kind of purported ‘Great Truth’ about complexity or whatever. In short, keep the focus here on usefulness, not ‘Truth’: that distinction is somewhat subtle, but kinda important…

And yes, it is a useful crossmap – for me, anyway, and useful perhaps as much for what doesn’t quite crossmap as well as for what does.

In any case, thanks again to JB for finding it!