By now, most people in enterprise-architecture will know Gartner’s beloved ‘Bimodal IT’ as ‘the gift that goes on giving’ – giving of wry laughter, that is, as the Gartner consultants seemingly each queue up, one after another, to make ever-more-futile attempts to defend the indefensible. The blunt fact is that, for almost all practical purposes, so-called ‘Bimodal IT’ does not work – it’s dangerously over-simplistic, all but guaranteed to make things worse over the longer term, and belongs only in the ever-growing pile of big-consultancy ideas labeled ‘Do Not Touch With A Bargepole’. We know that now: and it really is time they gave up flogging that particular long-dead horse.

One of the most recent Gartner attempts was an article that tried to use Simon Wardley’s ‘Pioneers, Settlers, Town Planners‘ model as some sort of ‘proof’ that Bimodal-IT is somehow ‘A Good Idea’. Since Wardley’s model is more often cited as an explanation of why the Bimodal concept doesn’t work, this attempt fits rather too well into the general category of ‘pushing one’s luck too far’. Oh well…

But it got me thinking: What’s a better, more visual, way to explain what’s wrong with the Bimodal-IT idea, and why it not only doesn’t work, but can’t work? One answer that came up for me started from a rethink about the classic Rogers technology-adoption lifecycle:

For which a basic summary for each of those groups or stages would be as follows:

When we crossmap this to the SCAN frame (or a flipped version of it, to be more precise), we can see that the Innovators and Early-Adopters work more with the ‘preorder’ or ‘unorder’ aspects of change – the ‘shadow’-elements of the architecture – whereas the others sit in the more ‘ordered’ realms of the business: 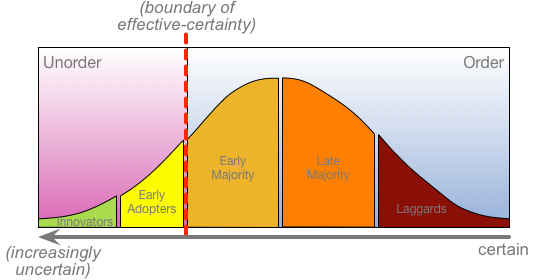 We can also crossmap this to Gartner’s Hype Cycle and Geoffrey Moore’s ‘the Chasm‘, and how the former in effect creates the latter:

As described in the post ‘Big-consultancies and bridging the chasm‘, the big-consultancies such as Gartner in effect position themselves as a bridge across ‘the Chasm’, via which the change-hungry yet deeply change-averse Early Majority can access supposedly-proven innovations without apparent risk:

What gets interesting here, though, is that if we build a crossmap between the technology-adoption lifecycle and Wardley’s ‘Pioneers, Settlers, Town-Planners’, we get pretty much an exact match – for the first three stages in the sequence, at least:

Playing with that crossmap a bit suggests a couple of extensions to Wardley’s sequence – ‘Exploiters’, for the Late-Majority stage, and ‘Stayers’, for the Laggards stage:

Or, in a bit more detail:

— Pioneers (Innovators): These create new ideas from scratch, or from suggestions gleaned from other explorers – like pioneers in a new and unexplored land. There is a lot of excitement from the anarchic ‘newness’ of it all – but it may not necessarily be very realistic, especially for the longer term.

— Settlers (Early-Adopters): These take the ideas and innovations from the Pioneers, and do the hard graft of finding out whether or not they’ll succeed in the real-world. This is usually hard, difficult, often-dangerous yet also often-unacknowledged work – sometimes literally airbrushed out of history by those who come along in later times.

— Town-Planners (Early-Majority): These impose rules and order onto the context, bringing certainty and repeatability that wasn’t there before. There’s some risk, though, that the gains from a more ordered world may be loss in an excess of new-found bureaucracy…

— Exploiters (Late-Majority): These apply the outcomes of all of the previous work, largely unchanged, to gain the maximum possible benefit from proven technologies and the like. The only work that’s likely to be done during this stage would be to squeeze small extra efficiencies from fine adjustments and context-specific adaptations. Towards the later part of this stage, ‘exploit’ can often take on a more pejorative meaning, as rising technical-debt and broader contextual changes bring on the onset of a metaphoric equivalent of urban-decay.

— Stayers (Laggards): These sit at the other ‘bleeding-edge’ of technology-usage, continuing onward with the same old tools long after others have moved on. Often these are the metaphoric equivalent of squatters making the best use of the scraps available in the wreckage of urban decay, or just plain unwilling to move on from what they’ve known for so long. At times, though, there are genuine reasons to stay with the old, rather than running off to the new: many banks and others still run COBOL on mainframes, for example, whilst parts of the US NORAD air-defence network reputedly still use systems that depend on magnetic-core memory – a technology that was already considered outdated more than half a century ago.

We can then in turn crossmap all of that onto the Hype Cycle and the Chasm: 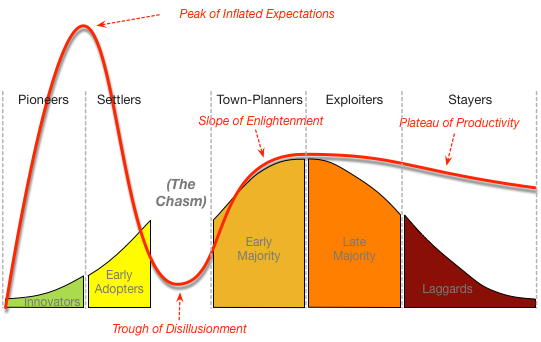 Which brings us to Bimodal-IT. From Gartner’s various descriptions, we could summarise the two modes in that model roughly as follows: 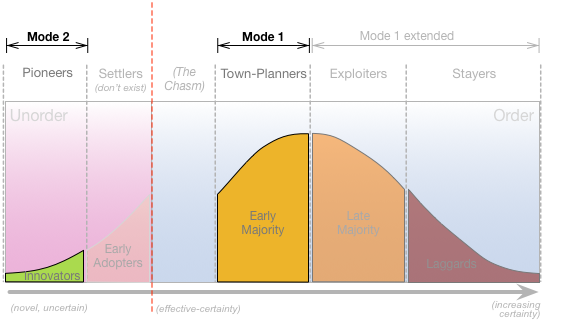 The Exploiters and Stayers still fit into the picture – sort-of, if often largely ignored. But the Settlers have vanished – and yet as Simon Wardley has had to explain several times now, they’re absolutely essential, because they’re the ones who do the hard graft of hammering the innovation to make it work well in real-world practice. Without that crucial stage, most innovations would remain a mixture of hype and wishful-thinking, and probably never reach effective usefulness at all.

So why on earth have the Settlers disappeared from the picture? One possible answer becomes all too obvious once we take a look at how and to whom the big-consultancies sell their wares. They sell to Early Majority clients: and the whole point there is that those clients are, again, very change-hungry – which makes them wide-open to hype – and yet also very change-averse – which means that they’re decidedly skittish about anything that might look like an uncertainty, a downside. Which means that we often get this lovely pretence that the hype-curve only ever goes upward: 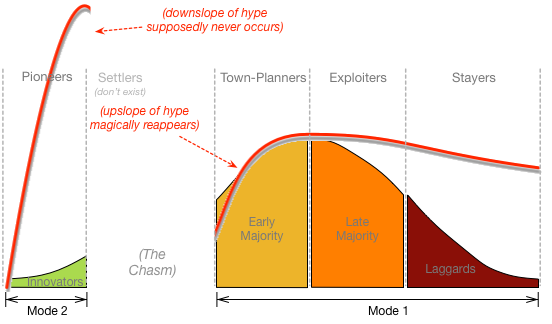 On top of that, what Early Adopters / Town-Planners most dislike is messiness – which is certainly what we’d get from Innovators and Settlers. And that means that, for the big-consultancies, the Settlers have to be quietly excised from the picture somehow, because they are all about realism, hard work and, yes, dealing with downside…

Which in turn does nasty things to the big-consultancy bridge. It now has to cross a Chasm that’s more than doubled in width; and it in effect also has to do all of the work that the Early-Adopter / Settlers would otherwise do, whilst somehow keeping all of that work out of sight from their Early-Majority clients: 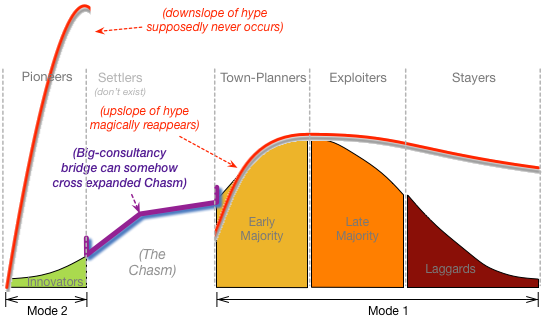 The catch is that that expanded bridge would be in direct conflict with the big-consultancies’ own business-models, for two clear reasons:

— It means they have to do a lot of extra work – in effect, everything the Settlers would otherwise have done. Not only are the big-consultancies often ill-equipped to do this (being cynical, I sometimes suspect that their attitude is that that’s what small-consultancies are for, as we know to our all-too-literal cost…), but they’d also have no way to bill it to the client, because the whole point is that those uncertainties need to be concealed from the Early Majority end-clients.

— In most cases, the big-consultancies’ business-model depends on having a few highly-experienced consultants visit the client, and then doing the rest with cookie-cutter work done by large numbers of relative newbies billed at ‘consultant’ rates. Yet the Settlers’ role is different in every case: so in effect the expanded bridge would tie up all of the experienced consultants, and still be too context-specific to build cookie-cutter models that would actually work well enough for newbies to be let loose with them.

The result is that Bimodal-IT (or bimodal-whatever-they’re-selling-now) becomes ‘a bridge too far’, in which a much-needed bridge either doesn’t even exist at all – because it’s too difficult and/or expensive for either party – or at best ends up floating in the middle of nowhere, drifting uncomfortably somewhere between Unorder and Order, and with no real means to anchor it to anywhere real at either end: 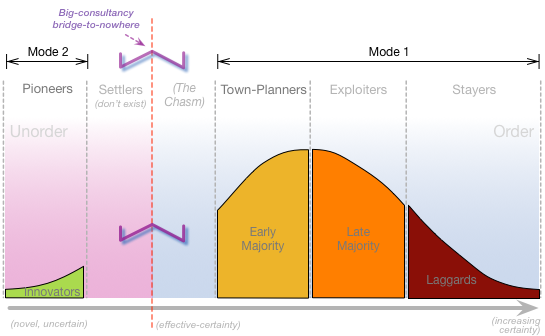 And the result of that is that any attempt to implement Bimodal-IT will fail, not least because it actively excludes any viable means to link innovation and adoption, from so-called Mode 2 to so-called Mode 1. What we need instead is a systematic, fully-structured ‘governance of governance’: but Bimodal-IT itself is definitely what we’d have to call Not A Good Idea…

Yet those crossmaps between the technology-adoption sequence, the hype-cycle, the Chasm and Wardley’s ‘Pioneers, Settlers, Town-Planners’ and the rest do all seem like quite a good idea. Anyone have any other insights that might arise from those? – and if so, let us know here, perhaps?