More on principles and decision-time

Seems that that Twitter-conversation about principles and decision-making just keeps on rollin’ on. 🙂 Stijn Viaene kicked the ball rolling again with the following Tweet:

After which, yes, the whole happy ‘passel o’ rogues’ piled in, all in their different ways:

I caught up with the conversation at this point, and given that my name had been invoked right the way through the above – even though I hadn’t been there – I thought I’d better join in:

And, of course, the ongoing problem with Cynefin had been invoked as well:

I ought to expand that Tweet here, because the above ‘explanation’ suffers from the dread 140-character limit on Twitter. As described in the SCAN posts – perhaps particularly in ‘Comparing SCAN and Cynefin‘ and ‘Belief and faith at the point of action‘ – I would answer ‘Yes’ to Kris Meukens’ question “In near-realtime would sensemaking not just be limited to deal with it as either simple/chaotic?” (‘Chaotic’ being the nearest Cynefin equivalent to what I’ve termed the ‘Not-known/Faith’ domain for sensemaking and decision-making respectively). The point is that in near-real-time, there isn’t time for anything else: in particular, no time to think, hence, no time for Complicated or Complex (the equivalent of the latter described in SCAN as the ‘Ambiguous/Use’ domain).

The catch is that whilst Cynefin’s definition for tactics for the Simple-domain – ‘Sense-Categorise-Respond’ – does match up quite well with what happens on the Simple/Belief side, the defined tactics for the Chaotic side – ‘Act-Sense-Respond’ – for the most part do not line with what actually happens. Or rather, they sort-of-describe one particular type of tactic that can be used in that domain, but in many if not most cases those tactics are exactly what not to do.

More on that in a moment; for now, back to the Twitter-stream:

This obviously needs some further explanation, so we’ll go to the original source as pointed in Kris Meukens’ link above: Kurtz & Snowden, ‘The new dynamics of strategy: Sense-making in a complex and complicated world‘ (2003). The following (presumably (c) Kurtz & Snowden, used here under ‘fair use’) is its Figure 4, ‘Cynefin Dynamics’: 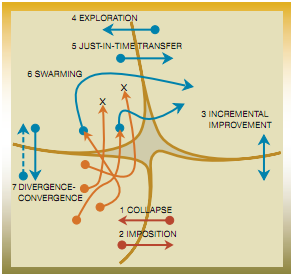 The Simple and Chaotic domains are on the lower-right and lower-left respectively. For now, we’ll ignore the paths that only go between Complex, Complicated and/or Simple (3, 4, 5 and 6), and focus only those that apply at real-time, Simple<->Chaotic (1, 2) and Chaotic<->Complex (7 and the various orange-line paths).

[Path 3 links to Simple, but tends to occur at significant distance from real-time: it’s typified by PDCA-style learning-loops and the like.]

Paths 1 ‘Collapse’ and 2 ‘Imposition’ are generally well-known and (fairly)-well-understood. When the expectations of Belief (Simple) don’t match up to reality, there’s often some kind of ‘Collapse’. (That’s actually a failure-mode: it doesn’t describe how we can intentionally move into the ‘Chaotic’ when we acknowledge that the current belief-set doesn’t work.) Once in the Chaotic, and if panic is allowed to take hold, very often there’s an attempt at ‘Imposition’ of order – an assertion of ‘truth’ that pulls the context back into the Simple. (This too is often a failure-mode, by the way – especially if the imposed ‘truth’ likewise doesn’t match up with reality.) That Imposition typically occurs because someone decides to ‘take action’, the Act-Sense-Respond sequence: but what it causes is usually a failure-mode, a collapse back into the over-Simple.

The unnumbered orange-line paths illustrate well what I mean by ‘running away to the Complex domain’. Having arrived in the Chaotic domain, the Act-Sense-Respond tactic is used to elicit and grab at a momentary idea or sense-item and ‘escape’ to the Complex domain, to assess or analyse or analyse what it is or how it could be used. Rather than ‘holding the space’, the Act part of the tactic itself causes the retreat to the Complex. And in doing so, it moves out of real-time: it doesn’t work with the Chaotic as it is.  We might also note that whilst some of the orange pathways dead-end in the Complex domain – for example, ideas that, once assessed, turn out to be unusable – the paths that do ‘succeed’ all end up in the Complicated-domain. In effect, what the Cynefin-dynamics are suggesting here is that the only valid place for new ideas is ultimately in the domain of Complicated ‘control’ – in other words, right back in the same old trap of Taylorism and ‘scientific management’ again.

[This is one of several aspects of Cynefin that make it all too easy to misuse to delude worried business-folk into believing that the the deep complexity and chaos of the real-world can indeed all be subject to ‘control’. Still seems to me that there are some real ethical concerns about the structure of Cynefin that really do need to be addressed… but that’s just my opinion, of course…]

Path 7 ‘Divergence-Convergence’ indicates a slightly more refined version of the orange-lines paths: iterative rather than ‘one-shot’, but still centred on the Complex-domain, away from real-time action and real-time decision-making. This is what I mean by ‘dipping the toes into the chaos’: it’s a useful and valid way to garner new ideas, yet it still doesn’t work with the Chaotic as it is – like a mouse snatching the cheese, it’s grabbing some tasty morsel and then running away as fast as it can.

What there isn’t in any of the Cynefin-dynamics or other Cynefin descriptions is anything that does work with the actual nature of the Chaotic mode: for example, all the classic tactics for keeping the panic at bay, such as meditation and so on – and also ‘pre-seeding’ the space with principles and the like (which is where we started this long Twitter-conversation 🙂 ). In fact many of these tactics are the exact inverse of the Cynefin pattern: rather than the “don’t just stand there, do something!” of Act-Sense-Respond, what we often most need is “don’t just do something, stand there”! That’s what I mean when I say that the Cynefin required-tactics are too limited here: Act-Sense-Respond does apply in certain cases, but it only matches up with a small subset of what we need to do (or not-do), and often it is just plain wrong.

Note too that, in terms of the Cynefin-dynamics above, the only pathways that remain in the near-real-time space are the Collapse/Imposition pair – which happen to represent a classic cyclic failure-mode.

In short, the Cynefin-dynamics give us a very incomplete picture and, at best, rather unhelpful picture of decision-dynamics at real-time, and tell us almost nothing about what actually does work in the near-real-time space.

So I hope you can see from this that there are some serious problems here that are just not being addressed in Cynefin: this is serious critique, and certainly not deserving the kind of petty personal putdown-attacks that have been the usual response from that direction. Sigh…

Anyway, back to the Twitter-stream:

I had to duck out at that point, to do some promised tech-support for a colleague: we parted, with quick thanks shared all round. But a few other Tweets popped up in the stream somewhat later:

Innovation is described above: quick summary is that it’s sort-of implied in the Cynefin-dynamics path 7 ‘Divergence-Convergence’, but note that it only links to the Complex: there’s no path described for innovation at real-time, the Simple <-> Chaotic link.

On “Not an inference I ever made w Cynefin” – a valid point, though I hope from this post above that the reasoning behind that inference is now clear. And, in turn, the reasoning why I now strongly recommend to not use Cynefin in its standard form in enterprise-architecture.

Anyway, enough for now: over to you, perhaps?

11 Comments on “More on principles and decision-time”