How do we make sense of story – the stories and narratives and anecdotes that people tell each other and themselves about their world? How can we link between the layers of story to help us make sense of some broader picture, or to derive a clearer view of some desired future?

(This is a post I’d promised a colleague a long time back – this is me at last completing on that promise! 🙂 )

One of the tools I often use for this purpose is Sohail Inayatullah’s Causal Layered Analysis (CLA). Sometimes described as ‘poststructuralism as method’, the original paper on CLA shows that it was originally intended as a context-assessment and action-learning technique for strategic-foresight – which is where I first learnt it – but it has much broader applications in sensemaking and suchlike. 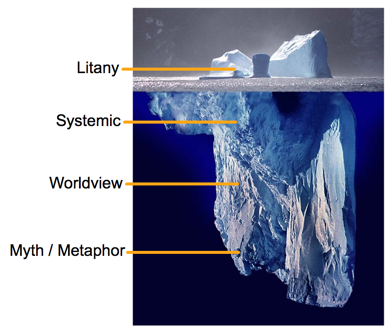 – At the surface is the litany, the world of the tabloid-newspaper, the everyday of ‘the world as it should be’ – or, more often, the ‘litany of complaint’ that it’s not ‘as it should be’. That’s one of the classic signals here: whenever we see a key-phrase such as “they should…” or “they ought to…” or suchlike, that narrative is at the level of the litany. “My truth is the truth” is another theme we’ll see asserted here – and often that’s all that people will see, hence why CLA is sometimes depicted as an iceberg, with only the Litany layer visible above the surface. (The Wikipedia article adds that the litany is “the official unquestioned view of reality”.)

– Beneath this is the systemic layer, the layer of social causation. Here we’d shift from personal-story to shared-story, and to the common-themes and supposed certainties – “just the facts, ma’am…” – that underpin that shared-story. (Wikipedia: “The data of the litany is explained and questioned at this level.”)

– Beneath this again is the worldview layer – the stories and narratives through which we decide what is ‘relevant fact’ and what is not. These stories last much longer than those of ‘the litany’, but they do still change over time: look at the history of science, for example, the changing stories that underpin the structure of scientific revolutions. (Wikipedia: “The way in which different stakeholders construct the litany and system are also explored.”)

– And beneath that is a core of deep-myth and metaphor – “the unconscious emotive dimensions of the issue”. These are the culture’s creation-myths, those deep, subtle, somewhere-in-the-background stories that underpin assertions such as “we hold these truths to be self-evident” and suchlike. It’s here that we find the foundations for different ‘ways of knowing’: for example, the very different deep-stories that underpin what we’d see in the layers above as a ‘scientific’ worldview versus a ‘religious’ one.

(If you don’t mind coarse language, these differences between the CLA layers are illustrated well in this brief annotated-video of a Louis CK comedy-routine.)

And in all of these layers, and between the layers, there are conflicting or competing narratives. So, given these layers of story:

The challenge is to conduct research that moves up and down these layers of analysis and thus is inclusive of different ways of knowing. Doing so allows for the creation of authentic alternative futures and integrated transformation. CLA begins and ends by questioning the future.

In other words, the kind of tool that we do need for ‘questioning for the future’ in many of the aspects and applications of enterprise-architecture.

Also interesting (to me, at least 🙂 ) is that that dynamic-layering also lines up well with the SCAN framework:

There’s a crucial transition in CLA between the Social-cause and Worldview layers that almost exactly mirrors the Inverse-Einstein test in SCAN. The Social-cause layer reviews the detail (and endless complaints) of the Litany layer, and in some cases re-informs, re-affirms and guides the Litany, but does not question the assumptions on which the Litany is based. (For a real-world illustration of this, compare the various descriptions of the same event in different newspapers or other media-channels: each describes and reviews the event from their own unquestioned worldview.) It’s a description of a presumed-unambiguous world: in essence, it assumes that the Litany is ‘true’, rather than as if ‘true’ – a perhaps-subtle yet very important distinction. The transition to the Worldview layer, and, deeper, the Mythic layer, requires a willingness to let go of the assertion that there is just one single view of the world that is ‘true’ – a requirement that in practice can be extremely challenging for many people, even though it’s the only way that works in building a viable sense of the whole-as-whole.

Also notable in that crossmap is the implication that in real-time action the options get squeezed right down to either the Litany, or the Mythic: there simply isn’t time for anything else. And if we don’t have access to the Mythic, then all we have available to us is the Litany, the Simple and Belief-based view of the world – which often doesn’t align well with the real-world at all. Yet since the Belief is always purported to be ‘the Truth’, it’s therefore presumed that it is the world that is ‘at fault’ whenever any mythquake of misalignment occurs – not the beliefs. Hence, all too often, the Litany as ‘litany of complaint’…

Given that crossmap between CLA and SCAN, we can then play with some of the other SCAN crossmaps, such as mapping to the sensemaking/action modes of ‘swamp-metaphor‘: 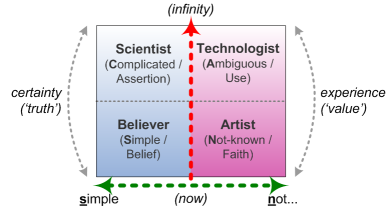 And yes, it’s a fairly close match – though as usual, it’s the areas where the mappings don’t seem to align that deliver the most useful insights.

The Believer tends to sit in the Litany, and often not much else – as we may have noticed… 😐 By contrast, the Artist might perhaps spend too much time in the Mythic space, and not enough in getting things done – or at least, done in a way that can make sense to anyone else.

Yet the Scientist and the Technologist will often swap around between their respective spaces. Their respective ‘default-positions’ might well be as in that crossmap; but in practice the Technologist will often move across to the more certain side of the Inverse-Einstein boundary – otherwise known as ‘go back to theory’, or ‘applied science’ – whereas the Scientist (or at least, someone who actually does real science, as per Beveridge’s The Art of Scientific Investigation) will need to be able to face the inherent ambiguity and uncertainty of experiment.

The Technologist uses beliefs as tools, as per Gooch‘s Paradox that “things have not only to be seen to be believed, but also have to be believed to be seen”; and we do see somewhat of the same in the real Scientist’s willingness to accept some degree of inherent-contradiction, such as in wave- versus particle-theories of light and suchlike. The archetype who’s often seen to be ‘the Scientist’ – the extreme-‘Scientist’ who never crosses the Inverse-Einstein boundary – is actually a recursion of the Believer (‘Scientist-within-Believer’), otherwise known as the Priest: we see a lot of that not only in religions of almost every flavour, but also in para-religions such as most political parties, many social-activist groups, the ‘science-as-religion’ so vigorously promoted by the Skeptics Society, and the ‘rational-actor’ myth so beloved by so many self-styled economists. Oh well.

Anyway, something else to play with, perhaps? And I’d certainly recommend CLA as another useful tool for enterprise-architects to include in their ‘soft-systems’ toolkit.

Over to you, if you wish?