Do we now live in a post-jobs era? With the rise of AI (artificial/augmented intelligence) and suchlike, do we need to rethink the meaning of ‘a job’ – or what it is to be without one?

More to the point, though, we should never have been in a ‘jobs-era’ in the first place. Even the very concept of a ‘job’, and its social implications, was a mistake, right from the very beginning. And that’s the bit that gets missed out in most of the conversations on ‘post-jobs’ and the like…

Step back a bit. What exactly is a job?

Not quite. What happens to those who can’t get a job, either because they’re ill or disabled, or too young or too old? What happens to those who are otherwise engaged in other socially-necessary work that is non-exchangeable, such as parenting or elder-care? (Why is it that if two people care for each other’s children, it’s classed as ‘a job’, whereas if they each do exactly the same work in looking after their own children, it’s now not ‘a job’?) What happens if there’s no paid-work around – or no work that we can do, and no means to train up to do it?

That’s how we end up with the mess of taxes and benefits and pensions and the like: that whole mess exists primarily because the concept of ‘a job’ as denoting entitlement of access to societal resources doesn’t work.

And who determines what ‘a job’ should be, and how much entitlement to societal-resources that job should enable? That gets kinda tricky too… Consider, for example, the long-running struggle around the eight-hour workday: 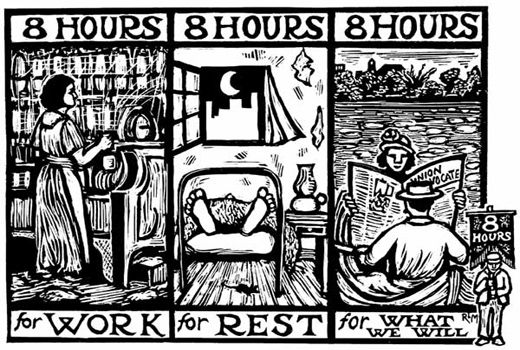 How in the hell could a man enjoy being awakened at 6:30am by an alarm clock, leap out of bed, dress, force-feed, shit, piss, brush teeth and hair, and fight traffic to get to a place where essentially you made lots of money for somebody else and were asked to be grateful for the opportunity to do so?

At which point I start to wonder just how different that really is from this: 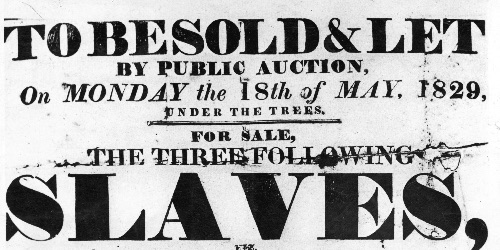 It’s still the same ‘owners’ – the same ones who now wish to dispose entirely of human labour (and the costs and responsibilities thereof), and replace them with even cheaper, tireless, uncomplaining robots. (To the much-repeated question on Quora, ‘What could Trump do to bring lots of well paid manufacturing jobs back to the US rust belt?‘, the short-answer from pretty much every respondent so far has been the same: ‘Nothing’. The jobs might have perhaps been lost to China or elsewhere at the start, but they’re now to automation – even in not China – and the trend is getting faster by the day.) It’s still the same progression, the same social insistence that power is not as per the physics-definition, the ability to do work, but – for the ‘owners’ at least – the ability to avoid work, the ‘right’ to entrap others into their work for them.

To be blunt, the only differences I see between chattel-slavery and wage-slavery is that the former was more honest about the relationship, and the latter entails even less responsibility on the part of the ‘owner’. And a society and its economics can easily be set up by the ‘owners’ of its legal-system to promote and protect a switch from the former to the latter – as was undoubtedly the case in Southern states of the US in the post-Reconstruction period of the ‘Redeemers’.

So-called ‘neoliberalism‘ is merely the current variant of the exact same theme: protecting the ‘owners’ of the money-system in every possible way, whilst demanding that a laissez-faire absence of responsibility should be applied to everyone else. The active promotion of what is in effect debt-bondage by banks, lenders, corporations and even governments merely adds another sick twist to the same story: it’s useful sometimes to remember that the word ‘mortgage‘ literally translates as ‘death-pledge‘…

And to add a few more points to clarify just much of an almost-certainly-irredeemable mess we’re facing here, I’ll re-quote, from my post ‘Enterprise-architecture – a further-futures report‘, some comments from a World Economic Forum study published a few months back. For a start:

At a societal scale, we don’t even know how to support the people doing most of the work that our societies really need to be done:

Beyond politics, yes, there are a few brave souls proposing various ‘solutions’, such as ‘Universal Basic Income‘ and the like. Yet to my mind, and those of some others too, such ‘solutions’ are still too simplistic, and are merely stop-gaps at best – because they don’t really tackle the real problem, namely the whole concept of ‘jobs’ in the first place, and even more the entire inherently-dysfunctional, inherently non-sustainable system of possessionist-economics that underpins the whole mess. To get beyond the mess, the changes we need will be a whole lot more fundamental than that.

The short summary? If the question is ‘Do we now live in a post-jobs era?‘, the only meaningful and viable answer is ‘Not yet – but we need to be‘. But the real tragedy is that we should never have been there in the first place: and it was a mistake – or, more accurately, merely one part of a much larger mistake – that we still need to correct, as a matter of the most extreme urgency, before it kills us all.