10; 100; 1000; 10000. A lot of things those numbers could apply to, of course, but in this case they’re ballpark figures for the number of hours of learning-based practice that it takes to develop specific levels of skill.

(We perhaps need to emphasise that point about ‘learning-based practice’, because it’s entirely possible to spend 10,000 hours of practice having learnt nothing new in all of that time, and hence still remaining at the Trainee level. In practice, skills develop through a continued cyclical process of do, test, evaluate and adapt – challenging oneself to improve in the skill on every step of the way.)

The thousand-hour level is quite well-known – the point at which we recognise the skill as skill. It should be obvious that it’s part of a continuum: yet what’s not so obvious, perhaps, is how that continuum works and what each level means in practice.

Skill-levels in part determine how we deal with an unknown world, so it’s useful to compare skill-levels against the SCAN framework, mapping sensemaking-perspectives against complexity, and time-before-action:

…to which we can then also crossmap those periods of time needed to develop the respective level of skill:

…and where, via further cross-maps, we can also describe the typical ‘action-context‘ for the respective skill-level in terms of the focus for the action: 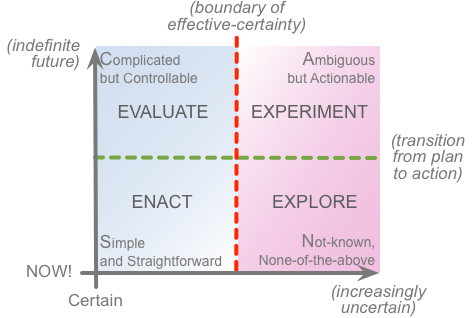 …and in terms of ‘knowable and discoverable‘ – about what is already known and seemingly-certain, versus what must be discovered about in unknown or unique: 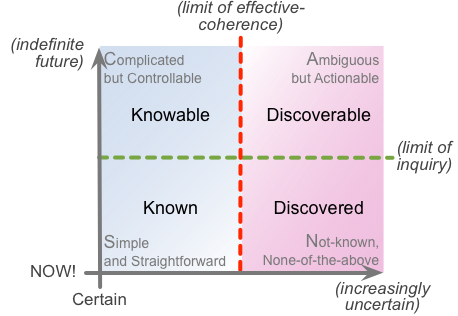 So, overall, in a bit more detail:

— 10 hours minimum: Trainee: ‘learn by rote’, the typical outcome of a day’s-worth of training, or a weekend workshop – knowledge of at least the basic terminology of a skill, plus competence to at least do something useful in that context. Since there’s no real skill here – it’s just actions in response to given assumptions – this skill-level will always need to be supervised by someone or something that does have a higher skill-level, in order to ensure that what is done will actually work as intended in real-world practice. (That supervising ‘someone’ can be the same person, by the way – and often is, for real people in everyday business practice.)

This skill-level solves a single defined problem by a single predefined method in response to a single set of narrowly-constrained assumptions. We use this level wherever conscious decision-making is either unnecessary or undesirable, or there’s no time to think about what to do: stick to the rules, ‘the law’, keep the focus only on the task at hand, just do it, and do it fast. This is the basis of all real-world action: everyone will have thousands of competencies of at least this level by the time they leave school, and many thousands more over a working lifetime, but will develop only selected competencies to higher levels of skill.

— 100 hours and onward: Apprentice: the typical outcome of a two-week training-course combined with real-world practice, or working one’s way through the whole of an instruction-book – there’s awareness of some or most of the key factors in the context, and what the trade-offs are between them. It describes and operates within an analytic ‘theory’ or interlinked set of predefined algorithms and assumptions about how some aspect of the world works.

It’s crucially important to understand, though, that this type of skill depends on its assumptions: it is reliable only where those assumptions are valid, but it has no means within itself to test the validity those assumptions. Typical business software application encapsulate this level of skill, but in practice is suitable only for easily repeatable processes – not for true complexity.

Hence, as in the old fable of the Sorcerer’s Apprentice, this is perhaps the most dangerous of skill-levels: just enough knowledge to give oneself the delusion of competence and ‘control’, but not enough awareness of its real-world limitations – enough knowledge to get into serious trouble but not enough to get back out of it – hence it’s essential for there to be ‘practice-fields’ where the inevitable mistakes may be safely made. Further skills-development should also be supported by some form of cyclical review-process such as the Deming/Shewhart ‘plan / do / check / act’ sequence – often including structured feedback such as the After Action Review – or, for skills embedded within ‘intelligent’ machines or IT-systems, an iterative ‘Agile’-style development process.

Over a working lifetime, most people will develop dozens or even hundreds of competencies at this level. Specialists will tend to collect competencies within a specific domain – system-developers, for example, will learn and use many different programming languages over time – whilst generalists will be more eclectic, often learning just sufficient about each skill to be able to converse meaningfully with the specialists yet build bridges between them.

— 1000 hours and onward: Journeyman: the skills developed in a semester subject at university, a longer technical study, or just through routine practice over many months. By this stage there’s sufficient skill to work with the complexities of the real world – rather than only the abstract assumptions of IT-type logic – and to understand how to use guidelines and patterns, developing and testing hypotheses to interpret the inherent uncertainties and sheer messiness of most business practice. Unlike the ‘apprentice’ level, the ‘journeyman’ will be capable of doing unsupervised work – though there is still much to learn in terms of adaptability, ingenuity, precision and, especially, speed.

Most people will develop a fair handful of these, as the secondary-level skills of working life: for example, the old office classics such as typing, shorthand and bookkeeping, or more updated versions such as spreadsheet design. As before, generalists will tend to collect more of these, across a broader, more eclectic scope; specialists will tend to keep their focus on a central skillset.

— 10000 hours and onward: Master: the skills developed during the entire of a university course to pre-doctorate level, or of a full trade-apprenticeship – the latter traditionally ending with a skills-demonstration referred to formally as a ‘master-piece’. The knowledge and experience here is sufficient to know exactly how and when and why to bend or even break ‘the rules’, though this has now returned full-circle to working with the real world again in real-time. The classic description of this is the Chief Engineer in CS Forester’s novel The Ship: he stands on the deckplate, feet astride, hands behind his back, a still point in the centre of the action, silently watching everything going on, apparently doing nothing – yet takes action instantly when something crucial has been missed by others.

Some people never reach this stage for any skill; and whilst many may have more than one skill – reflecting a change in career, perhaps – the number of such depth-skills for each person will always be few. For generalists, the respective skill is that of ‘being a generalist’ – the ability to learn fast the basics of any skill and/or context, and link together all of those skills and contexts to support translation, coherence and unification across the whole.

In principle at least, there is also the 100000 hours level, representing fifty years’ full-time commitment to a single skill. Almost by definition, this would be relatively rare, but certainly does occur, especially amongst artists, musicians and scientists. One business example would be Peter Drucker, who spent a working lifetime of more than 70 years observing and commenting on the social structure of business organisations.

10, 100, 1000, 10000 hours; a couple of days, a couple of weeks, half a year, five years; trainee, apprentice, journeyman, master. A useful rule-of-thumb to describe four different and distinct layers of skill.