Warning: "continue" targeting switch is equivalent to "break". Did you mean to use "continue 2"? in /home/tetradian/apps/tblog/wp-includes/pomo/plural-forms.php on line 210
 Architecture is theory – Tom Graves / Tetradian
↓ Skip to Main Content
Home › Business › Complexity / Structure › Architecture is theory

Where this started was a snarky putdown the other day from someone who purported to work as an IT-architect. He was “giggling”, he said, because he regarded my work on whole-enterprise architecture as ‘all theory’, with no relevance to anything, And added, with another free gift of sneer, that a big investment company such as Berkshire-Hathaway – big in terms of the funds it manages, though not in number of employees or partners – would have no need for whole-enterprise architecture. Hence, he asserted, that one purported exception proved that no organisation would need it, therefore what I’d described was ‘all theory’, and therefore irrelevant to everything.

And yeah, I’ve had fifteen years of that kind of – let’s be blunt here – clueless inanity shoved in my face, day after day, month after month, year after year. If you wonder why I’m giving up on so-called ‘enterprise’-architecture, that’s one of the core reasons.

But one more try, though, in the hope that it might perhaps help others to avoid falling into the same traps as that sneerer…

There are two parts to this: the role of architecture as theory, and the specific role of whole-enterprise architecture.

First, on architecture and theory.

A quick one-liner: theory informs practice, practice re-informs theory. It’s a loop (sometimes known as a praxis-pragma loop) via which we can improve effectiveness in reaching iteratively towards a desired outcome.

For the ‘architecture’ context in business and elsewhere, architecture is theory, design is practice. In context of the ‘realisation-stack’ – such as in the sequence of layers in the Zachman model – we use design to move ‘down’ the stack towards real-world implementation, and use architecture to move back ‘up’ the stack to review and re-acquire guidance for that design. In visual form, the relationship looks like this: 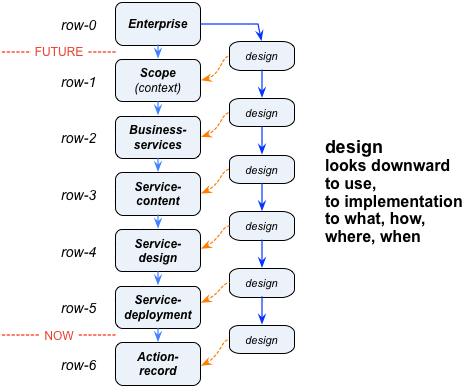 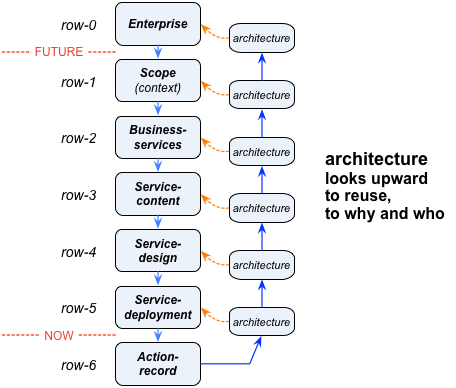 Yes, in working our way downward towards making something real, we mostly work on design. Yet the moment we need to rethink our options, at any stage in the development-sequence, we need to go back to architecture. Architecture is the theory that guides the practice of design.

Without architecture, design literally has no guidance. That’s exactly what happens when Agile goes wrong: it fails because it has no guiding architecture.

And likewise, without design, architecture cannot deliver anything tangibly-useful in the real-world. When that happens, that’s when architecture seems to be ‘only theory’.

(That latter problem is an almost-inevitable outcome of any architecture-framework that covers only a subset of the ‘realisation-stack’, and/or that describe higher/more-abstract layers as ‘architecture’ and lower/more-concrete layers as ‘design’. Those fundamental errors are a direct cause of the too-common perception that its version of ‘enterprise’-architecture is ‘all theory’.)

The second part here is about organisation and enterprise. That aspect of that sneering put-down about whole-enterprise architecture arises – to again be blunt – from a redoubled cluelessness about the nature of enterprise itself, and also about the content needed for an enterprise-architecture.

In that Berkshire-Hathaway example, it seems almost certain that the sneerer made two fundamental mistakes: failing to understand the crucial distinctions between organisation and enterprise, and making arbitrary assumptions about size of organisation in relation to applicability of architecture. (There’s also almost certainly some mistaken assumptions about content for enterprise-architecture, but that’s a separate topic for another time.) 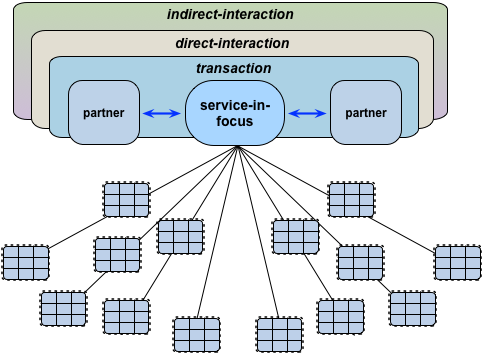 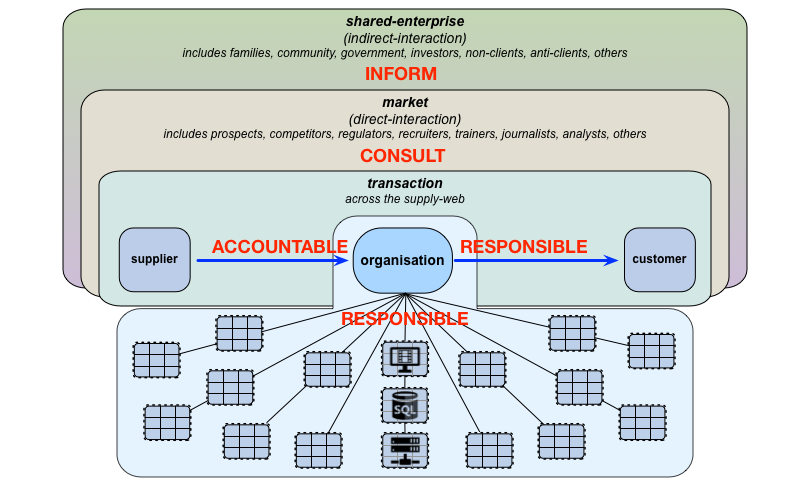 …and also much, much more, such as modelling the organisation’s options for positioning itself within that broader enterprise.

In short, an ‘enterprise’-architecture that allows us to assume that organisation and enterprise are synonyms is Not A Good Idea…

There’s one other useful lesson that we might gain from that sadly pointless putdown-attack, and that’s a reminder that emotion applied to theory can be a warning that we’re at risk of falling into the Seven Sins of Dubious Discipline – in particular, going ‘overcooked’ in Sin #4, ‘The Meaning Mistake’. In this example, an emotion such as ‘giggling’ is a classic indicator that someone’s being both arrogant and clueless in applying ‘policy-based evidence‘ to some context they don’t actually understand – and that if we’re giggling about someone’s view of theory, the one who’s being arrogant and clueless may well be us. Not A Good Idea…

0 Comments on “Architecture is theory”