Services serve the needs of someone.

Disservices purport to serve the needs of someone, but don’t – they either don’t work at all, or they serve someone else’s needs. Or desires. Or something of that kind, anyway.

And therein lie a huge range of problems for enterprise-architects and many, many others…

This is the fifth part of a six-part series on services and disservices, and what to do about the latter to (we hope) make them more into the former. Unfortunately, this turned out to be an enormous post (almost 12000 words), so I’ve had to split this part into four subsections, such that the series-structure now looks as follows:

In Part 1 we explored in some depth the structure and stakeholders of services, and explored how disservices are, in essence, just services that don’t deliver what they purport to do.

In Part 2 we illustrated those principles with some real-world examples in the education-system context.

In Part 3 we outlined some of the main factors behind one of the key causes for disservices: the echo-chamber of misplaced, unexamined belief.

From Part 3, we derived a list of keywords or keyphrases to watch for in everyday language. For the probable presence of policy-based evidence (the ‘echo-chamber‘), these include:

Part 3 also gave suggestions for tactics to identify and address potential or actual echo-chambers, such as TRIZ for reframe, rich-randomness for disruption of ‘pattern-entrainment’, and the use of guiding-principles to connect back to the core enterprise-vision. Example-techniques might include:

In Part 4 we looked at the other key cause for disservices: ‘power-against’, a dysfunctional misconception of power as ‘the ability to avoid work’, expressed in practice in a variety of forms such as claims of priority and privilege.

And keywords or keyphrases to watch for about the probable presence of power-against would include:

Part 4 also gave us a checklist of modes of impact for power-against, and what to do to mitigate against the respective risks:

(We’ll use those letter-codes to identify the respective types of problem-sources, in the assessment that follows further below.)

If we see or hear any of those keywords or see significant evidence of any of the checklist-items within the respective service-context, alarm-bells should go off straight away – because it’s very likely that disservices are being created somewhere within that context.

In this post, then, we’ll start to put all of that into practice, in assessment of real-world services. To complement that previous exploration of education-services, we’ll look at social-services, and the social-policy that underlies them.

The catch there, of course, is that, as with education, these domains are highly ‘political’, so I’d better reinstate the same warning-sign from the previous post:

The example of services from social-policy that I’ll explore here is around identification and resolution of domestic-violence. I’ve previously written quite extensively on this blog about my research-work and professional-experiences of these themes, such as in the posts ‘RBPEA: On abuse and gender‘ and ‘RBPEA: An anticlient’s tale‘, so I won’t go over the same ground again here. What I want to do here, instead, is show how to use the context-assessment tools from the previous two parts of this series to assess a politically-fraught context, which would give you the kind of practical-experience you’d need to apply the same techniques in similarly-‘political’ contexts in everyday enterprise-architecture.

(Warning: Some people may get a bit upset about this social-context – domestic-violence [DV] – and would probably prefer that I didn’t mention such concerns at all.

To be honest, it would be much better for this purpose to test out this kind of assessment on, say, healthcare-systems, or welfare-provision, both of which are every bit as politically-fraught as DV, if perhaps somewhat less-immediately visceral and emotive. But the reality is that those fields are much, much more complex than DV, and I don’t know them that well these days – for example, even though I do have some medical background, I haven’t had much recent professional engagement in that field – whereas I do know the real-world DV field pretty well by now. So sit with the discomfort, if you would? – I honestly am trying to help here.

Perhaps most important, remember that this whole series is more at the metaframework level, about a set of assessment-techniques that are applicable to any context – not about any specific context as such. I’ll use some straightforward thought-experiments and the like, to help you surface more about how your own echo-chamber operates, as much as the echo-chambers of others – and to support that, I’ll keep my own opinions out of the way as much as practicable. But if you do find yourself getting annoyed or upset, please refocus on the assessment-technique, rather than on any item of content. Fair enough?)

Before we start, I would suggest a probable vision/purpose for the overall shared-enterprise of domestic-violence resolution, that we can use as a touchstone for all assessment (adapted from the ‘Equality’ side of category-B):

To counter the ‘Misuse, abuse and violence’ side of each of those categories, we could place the following assertion:

Note, though, that “there is never an excuse” is not the same as “there is always blame” – not least because blame itself is a sub-category of abuse/violence category-K. Instead, realism applies: abuse and violence do happen, hence it is everyone‘s responsibility to resolve it, and minimise it, as best practicable.

Which in turn leads to an implicit requirement for services to support those needs – and also to not make it worse through misframed models and the like that end up delivering disservices to some or all stakeholders.

The task here, then, is to build on what we saw in Parts 1 and 2 of this series, and apply the assessment-techniques and checklists from Parts 3 and 4, to assess whether the structural aspects of current assumptions, models and service-designs for the DV-context are at risk of delivering destructive disservices to the overall enterprise – and if so, what would need to change to make them more likely to deliver true-services.

So where do we start? It’s probably fair to say that the common perception of DV is that it’s essentially something that only men do only to women and, thence, to children too. (We might note, though, that a ‘the common perception’ tends also to be an “as everyone knows” – a keyphrase that should warn us straight away of a potential echo-chamber problem.)

((Thought-experiment #0.2: If you look for formal research on DV, you’ll find many studies on female victimisation, some on male perpetrators, very few that compare both sexes on equal terms, and almost none on males as victims or females as perpetrators. What are some of the factors that could drive such a disparity? And if the disparity arises in any significant part from a ‘policy-based evidence’ echo-chamber, what impacts could that have on social-policy, itself reinforcing a ‘policy-based evidence’ loop? What could be done to counter that echo-chamber?))

The Duluth Model – the supposed ‘standard model’ for this context (the contextual equivalent of TOGAF, one might say?) – holds to that perception of DV as a ‘male-only’ evil, asserting that “women and children are vulnerable to violence because of their unequal social, economic, and political status in society” and that “we do not see men’s violence against women as stemming from individual pathology, but rather from a socially reinforced sense of entitlement”. It is explicit in its assertions as to who needs help, and where the cause exclusively resides:

It also insists that “men are perpetrators who are violent because they have been socialized in a patriarchy that condones male violence, and that women are victims who are violent only in self-defense”.

((Thought-experiment #0.3: Does this seem to you to be a valid model to describe the entirety of the DV context? What advantages would it deliver, in terms of service-design? What potential flaws – if any – would you see in this model and its underlying assumptions? How well, or not, does the model align with your own personal views about DV, as per #0.1?))

If this perspective is correct, then we would expect to see operating within the DV context a Starhawk-type power-model of the form: 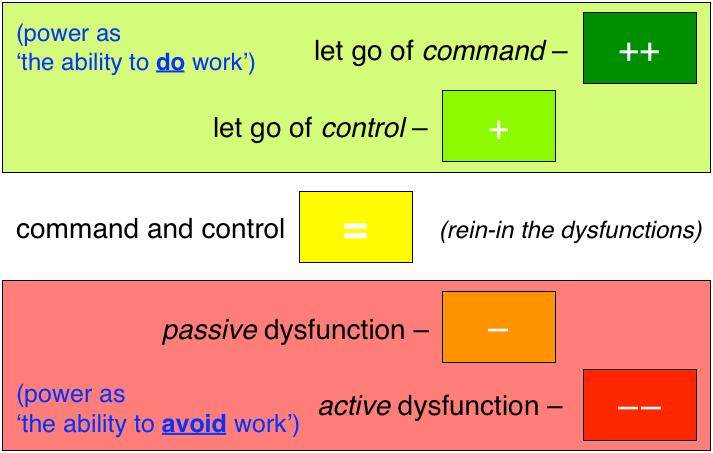 That in turn would point towards social-policy in which DV-resolution services would need to focus on reducing violence as an exclusively-‘male’ characteristic. That social-policy would also suggest that recovery-support for victims should be reserved exclusively for women, with ‘batterer intervention programs’ – such as Duluth itself – applied solely to men.

(Given the dominance of Duluth and similar models in the DV ‘mind-space’ at present, in essence, that is the basis of most current social-policy on DV.)

If, however, if the assumptions in Duluth and the like are not correct – in other words, that the issues are not inherently gendered as such, but more generically human, if perhaps with a few gendered-overtones – then we would expect to see a more symmetric power-model in which both sexes may push upward or downward on the SEMPER scale, in similar ways. That power-model would be of the form: 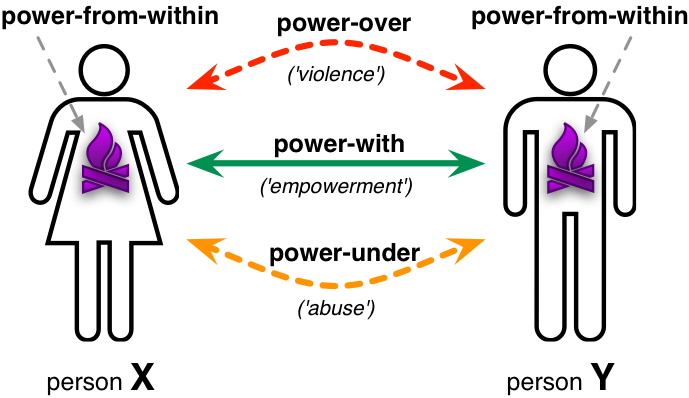 And in which power-against power-dysfunction is shared between both sexes in similar ways, in a classic ‘race to the bottom’ codependent ‘mess’: 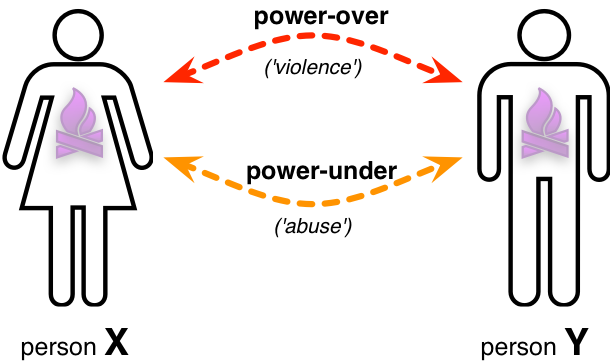 If this power-model is a more correct and useful description of the DV context, then social-policy would likewise need to point towards much more symmetric service-provision, including ‘victim-services’ and ‘violence-reduction services’ for both sexes.

But what would happen if one model – the symmetric power-model, for example – is what actually applies more in the real-world, but, for whatever reason, one or more groups of stakeholders impose the other model – an asymmetric Duluth-type power-model, in this example – on social-policy? The short-answer is that the social-policy would become inherently skewed, creating and applying serious disservices to almost every stakeholder. The policy would perhaps be valid for the subset of cases that do match the assumptions of the chosen power-model: but for all others, neither women nor men would be provided with the services that they need, and serious disservices would occur – particularly (though not solely) against men, in the case of an imposed asymmetric Duluth-style power-model.

Yet how could we identify if that kind of imposition of a potentially-invalid model is what’s going on? If there’s a full-on echo-chamber happening, there’d be no obvious way to find out, because all the apparent ‘evidence’ from within the context itself would be filtered through a ‘policy-based evidence’ loop, keeping analysis entrapped within a self-referential structure of circular-reasoning.

What we can do, though, is use the diagnostics from Parts 3 and 4 of this series, looking for key-phrases and other indicators of a probable echo-chamber, and/or indications that abuse or violence are being used, either actively or passively, to prop an echo-chamber – which, in turn, would prop up and maintain serious disservices for DV. For example, if a Duluth-style asymmetric model is being imposed on what is actually a more symmetric context for DV, we would expect to see hints, and more, of something that looks more like this: 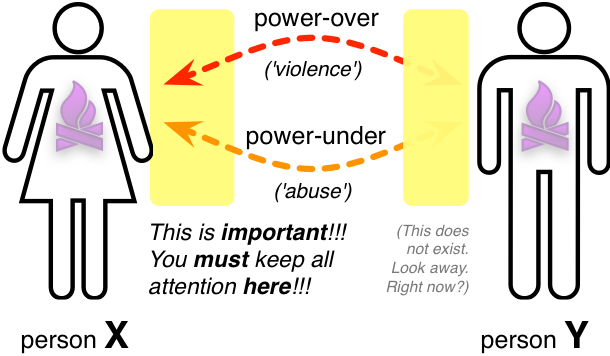 So as with the education-example from Part 2, let’s look at some recent media-examples in the DV context, and apply the diagnostics to each, together with some thought-experiments to test out your own responses and understandings – and then let you decide what’s actually going on, and what could be done about it.

3 Comments on “Services and disservices – 5A: Social example (Introduction)”