I’ve spent the past week in Ireland, first in Dublin at the IASA Ireland 2017 conference (co-hosted by ICS, the Irish Computer Society), and also at a follow-on event organised by Gar Mac Críosta.

Paddy Baxter‘s theme for the conference was ‘Show Me The Money!’. It was nominally about ‘ensuring value from digital transformation’, but he correctly judged that it would rile me up to produce something suitable contrarian for the occasion – because he knows I don’t like the money-economy and what it stands for!

Ireland in particular has had all too much first-hand experience of what happens when money (for other people) takes precedence over humanity and human values. On my last trip over to Dublin, last year, I took this photo of part of Rowan Gillespie‘s monument to the victims of the Famine – just one of all too many all but contrived to further the profits of absentee-landlords: 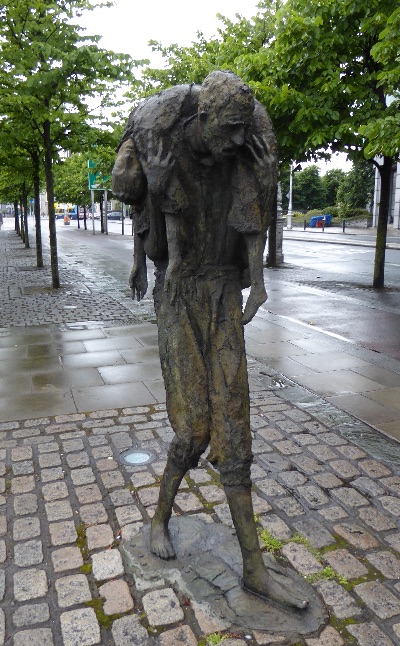 (This part of the sculpture relates to the story of a father who walked barefoot for many miles to a soup-kitchen to feed his starving daughter, carrying her all the way on his back, only to find that by the time he arrived the soup had all gone, and his daughter was already dead. And all this at a time where the landlords were still shipping food of all kinds out of Ireland, to make the profits that they desired ‘back home’ in England. Of all the harms that my country’s ancestors did around the world, many of the worst were inflicted on the occupied-territories closest to home…)

Okay, don’t worry, I won’t go into any more of the RBPEA themes just here. But I will include the links for the slidedecks from the conference, which I’ve now posted up to Slideshare.

First is the slidedeck from the conference itself. Paddy put into the conference-agenda the truly awful title of ‘Benefit Impact Analysis – Complex Systems Approach’, so I amended it a bit by adding ‘(or, How I Learned To Stop Worrying And Love All This Big Scary Digital-Transformation Stuff)’ (a paraphrase of ‘Dr Strangelove‘, of course!). Here’s the link:

And then there’s the slidedeck for the workshop on ‘Tracking value in the enterprise’, which was supposed to happen on the following day, but didn’t happen because there weren’t enough bookings. (Oh well.) In effect, it’s a ten-step workshop, timed for two-and-a-half hours but probably better at about twice that duration, using various of my tools from the bucket-list, to explore what ‘value’ means within the context of the respective enterprise, and what to do about it in architecture-practice. I hope it’s useful to some people, but here’s the Slideshare link anyway:

Once again, hope it’s all useful to someone. It’s up there for use, anyway – Share And Enjoy, perhaps?