Concept-development, and our role for Patreon

“I think we’re onto something here.” That was my colleague and designer Joseph Chittenden, talking about a rethink that came up from the previous post here on ‘Hope, optimism and delusion‘, in relation to our current Patreon project to make the Tetradian set of ‘tools for change’ more usable and more available and accessible for a broader market.

And that in turn has helped me to understand how to explain the role of that Patreon project, and where it sits in relation to my other work and other channels.

The start-point for me has been to link Joe’s phrase above to the ‘Innovators’ phase in the classic Rogers technology-adoption lifecycle, and then add matching keyphrases to each of the phases in the sequence:

The challenge for any Innovator is to get their ideas out to the mainstream – the Early-Majority and onward. One of the obvious reasons why this is so important, in our current insane ‘economics’, is that that’s the only place where’s there’s any likelihood of significant monetary returns from all of the innovation-work. As I know to my cost, there’s almost no monetary market in trying to sell to other Innovators, and it’s not that much better in selling to Early-Adopters either – which is fair enough, because the latter do necessarily take on some level of opportunity-risk in proving the value of our products. (They gain their value from being

But to get the innovation out to the mainstream, it must first go through the realism and real-world testing provided by the Early-Adopters group. If we try to skip over that stage, the innovation will fall straight into the ‘Trough of Disillusionment’ at the bottom of Geoffrey Moore’s ‘the Chasm‘, that sits between Rogers’ Early-Adopters and Early-Majority phases. This point becomes all too clear when we cross-map the Rogers sequence and Moore’s ‘the Chasm’ with Gartner’s equally-classic ‘Hype-Cycle‘:

(It gets even worse if we try to pretend that the Early-Adopters aren’t needed – as the big-consultancies so often seem to do. For more detail on that, see the post ‘Technology-adoption, Wardley-maps and Bimodal-IT‘.)

The catch, for me, is that I’m very much an Innovator in this sense: I’m constantly creating new ideas, new tools, new innovations of various kinds, and have had a solid track-record of doing for several decades now. What I’m not good at – not least because I don’t much work out there these days – is in the fine-detailed processes of refining and honing off all the rough edges in day-to-day real-world practice, in consultancy, production and the like, which is what Early-Adopters do so well. And I’m definitely not good at marketing, or producing the kind of high-quality, human-oriented graphics that the Early-Majority and beyond will need. To get out as far as the Early-Majority, or even the Early-Adopters, I definitely need help – or, to put it another way, to (learn how to) work well with others who can do those other kinds of work.

Which is where designer Joe comes into the picture, and where the Patreon project comes into that picture too: they provide the means to bridge across from my natural Innovator role, out to the Early-Adopters, and onward to Early-Majority and beyond.

Yet that keyphrase-crossmap earlier above also provides a means to clarify the roles for each of my various channels, and where they fit within the overall picture of the pipeline from initial idea practical tools that non-Innovators can use in their day-to-day work: 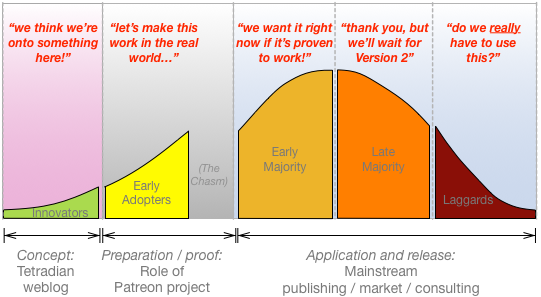 Relative to Early-Majority, we could summarise these as follows:

— Concept-stage (‘alpha’): I’ll publish new ideas and experiments on this weblog and on our Instagram channel. These will be most often be aimed at other Innovators, and at times may not make much sense to those who don’t work in that phase of idea-adoption. The themes will also often cover much broader scope than ‘tools-for-change’ – though change of some kind will usually be somewhere in the picture. As per the past decade, most of this will be self-funded.

— Refinement-stage (‘beta’): This is the main role for the Patreon project, and also for the YouTube channel. (For the latter, there’ll be at least two distinct playlists: ‘Tetradian on architectures’ – short explanatory-videos, as promised some while back – and ‘Tetradian on tools for change’ – linked more closely to release of tools-for-change.) Patrons on Patreon provide funding to make the tools-for-change materials more usable for Early-Adopters, and provide feedback to help drive the delivery of the tools more towards the level needed for an Early-Majority release. In return, those patrons get to see new materials earlier than anyone else, get access to some development-content that’s published only to Patreon, and also get discounts or free-access to materials as they’re made ready for final publication. Most of the YouTube videos will also be published to Patreon first, and only released to the general public somewhat later – typically at least a month later than Patreon subscribers get to see them.

— Publication-stage (‘release’): Once they’re ready, each of the tools will go out for release to Early-Majority via mainstream channels such as book-publishers and the like. Importantly, core materials will always be available under a non-proprietary licence such as Creative Commons Attribution / ShareAlike (CC BY-SA). The funding for this stage would be covered by conventional book-sales and suchlike, and via other items such as consumables and licensing for training-courses and so on. (We would encourage our Patreon-subscribers to gain further value from this, by acting as trainers and consultants, both within their organisations and to the broader market: given their engagement in the Early-Adopter stage, they’ll know the materials better than anyone else.)

In short, if you find useful the tools I’ve developed, such as SCAN, SCORE, Enterprise and the like, and you’d like to see them gain broader usage and acceptance, please support us on Patreon: you’ll not only help it happen, but you’ll gain a lot of extra value for your own work as well. And for those who already support us there, thank you once again! – because, from your help so far, it really is starting to come together now, for all us, and fast.