Intimations of arrogance from a grumpy old guy?

Okay, I admit it: I’m at real risk right now of becoming a grumpy old guy: 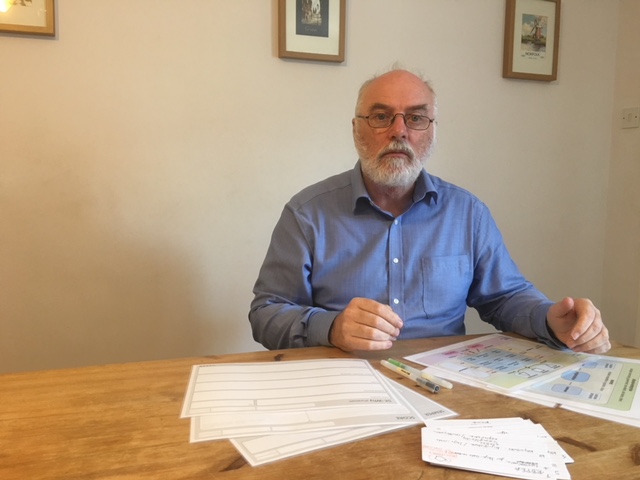 Getting snappy at people on LinkedIn and all that. More than a fair bit of that phrase about “Will not suffer fools gladly”. Patience strained to the limit.

Maybe sounds a bit like intimations of arrogance on my part…

And yeah, I could see how some might read it that way.

In my own defence, though, there’s a bigger picture here. One with a deadline. An all-too-literal deadline.

It’s not just that I’m a grumpy guy, I’m a grumpy old guy. That second adjective is getting all too real for me right now…

I’m running out of time. Literally.

True, I’m not dead yet. Not even particularly ill – not to my knowledge, anyway. But blunt fact is that I’m now just three years shy of that infamous ‘three score years and ten’, and I’m already seeing rather too many signs that I won’t be able to keep on with this kind of writing and work for maybe much longer at all.

My best estimate is that I have at least twenty years’-worth of work still left to finish, to make all of my tools and methods and more more fully usable, down to the level of the mainstream market and fully handed over to the next generation or two. In short, about twenty years of work still left to do, and maybe three years left in which to do it.

That kind of blunt fact kinda focusses the mind…

Which means that, all too literally, I do not have time to waste any more on other people’s inane arguments about theory and the like – particularly the theory behind my work on skills-development, whole-enterprise-architectures and suchlike themes.

As far as theory goes, I’ve long since set out my stall. For more than a decade now, I’ve outlined and explained every part of the principles, the underlying assumptions, the implications of those assumptions, and much, much more. I’ve shown how to test it, and how it’s all been tested in real-world practice.

All documented in about a dozen books, some fifty slidedecks, way over a thousand articles on this weblog alone, and plenty of peer-reviewed papers elsewhere.

If you have different ideas, go for it. It’s fine: you’re welcome. For whole-enterprise architecture and the like, I might well be able to show you exactly how and why they won’t work, and why they’re more likely to cause more harm than good in the greater scheme of things – but that’s your problem now, not mine. If you want to argue about it, go argue it with someone else: I don’t have time for that any more.

If you want to argue that I’m wrong about something, all I’ll say now is that before you try that on, I’ll ask you to do what I had to do, and did, with every part of my work: prove it.

Go back to first-principles on everything – everything.

Go through every darn assumption that you have.

Go through every implication of those assumptions.

Check every possible way in which those assumptions and implications might box us in to arbitrary, indefensible constraints.

Test the theory at every level, every scope, every scale, from a single interaction between two living cells or two web-services, all the way up to every possible interaction across the whole darn planet and beyond.

Test it at every timescale from sub-nanosecond to millennia and more.

Test it at the extremes. Test it in the middle-range. Test it in every possible combination you can find. Test it on itself.

And then, when you’ve done all of that with your own taxonomies, your own assumptions, your own models, your own frameworks and metaframeworks, you might indeed find it useful to come back to what I’ve written here and elsewhere. You’ll probably find that I and others have already been there, long, long before you’d even started. And at that point you might realise that if you’d actually bothered to listen, right from the start – instead of sneer and mock me and shout me down, as so many have done and still do – you’d have saved yourself and others one hell of a lot of wasted time and effort and worse.

But if you can’t be bothered to do the work, and are merely trying to dump the work on me instead? – well, I have no time for you. Literally. No time at all.

(More precisely, none of us can now afford to waste any time on that kind of foolishness. Not any more. Not with the scale of challenges coming over the horizon full tilt towards all of us. But that’s another story…)

If that sounds grumpy, sounds arrogant… well, too bad, to be honest. It is what it is. I am who I am.

Enough on that for now. I have work to do.

(In case you’re wondering what brought on this rant, you may have noticed that for the past few months I’ve been publishing a series of short videos on enterprise-architecture themes. And to accompany each of those videos – because there isn’t much detail in a three-to-four-minute video – I’ve usually republished one or two from the thousand or more of the articles in the archive represented by this blog. Yet each time, up come comments and emails and more from people trying to reopen old arguments that they got wrong years ago, and that have proven even further wrong now – which is foolish beyond extreme, especially when it’s from people who really ought to know better. Or else I get hit by indolent, lazy, fatuous put-downs from clueless newbies, like this one that came up on LinkedIn last night:

Looks like some trying to impress someone by taking basics and making it esoteric, I apologize but I do not get the point of this visual, partly because I am not going to take a bunch of time trying to figure what you are trying to convey with it.

Blunt fact is that I’ve run out of patience with that kind of cluelessness, and run out of time, too. I have much better and more urgent uses for what little time still remains to me. Oh well.)