Guiding the dance of change

Perhaps a better metaphor would be to dance with change.

That’s not a new metaphor, of course: for business-change, for example, there’s the now-classic book by Peter Sengé and others, ‘The Dance of Change‘. But if it’s a dance, then what are the steps for that dance? How do we do that dance? And how do we get others to join with us in that dance? We’re going to need an example…

For me, there’s one metaphor that comes immediately to mind. A few years back, I’d spent a lazy Saturday wandering around the central part of a nearby town. Out the far edge of the pedestrian-only area, there’s a young guy belting out on a full-drum-kit, drawing quite a crowd. And right out the front of that crowd, there’s a much older man – late seventies, at a guess – dancing his heart out to the beat, all but oblivious to anything but the music. A few people laughing at him, of course, but one glance told me he knew what he was doing: might well have been an old rocker from the ’60s, perhaps. Impressive. Impressive energy, too.

What was interesting was how he locked into the dance. There seemed to be two quite distinct phases to it, which he switched between, though on no particular signal. When he got into the groove, into the flow, his dance was wild, inventive, weaving in and through the structure of the sound. Yet every now and then, though, he would kind of lose the flow, lose the grip, lose the lock. Lost it. But he didn’t stop dancing. Instead, he would fall back into a kind of holding-pattern, very basic, just rocking back and forth to the beat. Then just as sudden, he would get his groove back, and off he went again – until the next time that he lost it, when he went back to his default-pattern once more. Back and forth, back and forth, tirelessly.

Working with change is exactly that kind of dance: a continuing dance of sense, make-sense, decide and act, then sense and make-sense again from the actions we’ve just done. And within that overall dance of exploration, there are the same distinct two alternating phases: a period when we’re ‘in the groove’, when everything flows, when we seem to know exactly what to do, and to do next; and a period when we lose the flow, where nothing seems to work, and there’s a risk that everything will come to a grinding halt. And that second phase is where we most need that lesson from the dancing old guy: when we lose the flow in ‘the dance of change’, we need to fall back to a known base-pattern for exploration.

Which is where our recent work on Five Elements might come into the picture: 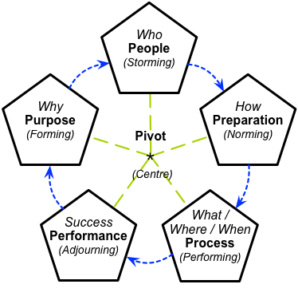 Or, in a less-abstract and more human-oriented form, like departments in an organisation:

In any work on change, we’d be likely to use a wide variety of checklists and other tools to guide the exploration – particularly in the ‘make-sense’ part in that cycle of of the ‘sense / make-sense / decide / act’. In practice, there could be an infinite variety of tools we might use: hence a huge challenge in keeping track of where we are at each moment in the exploration – in the dance – and of how to move between tools and link the tools together.

For our own work on tools-for-change, we resolve this challenge by a simple mechanism of keywords: if a keyword or key-phrase comes up in the dialogue of exploration, that in turn acts as a cue – much like a cue-phrase in the music of a dance – to suggest a tool we might turn to at that point. In the post ‘An inventory, sorted‘, you’ll see keywords associated with each tool, for exactly this purpose: hence, for example, if the words ‘opportunity‘ or ‘challenge‘ come up in the conversation, that might suggest that we could turn to the SCORE tool at that point, to explore the interplay of challenge, opportunity, risk, and the capabilities we’d need so as best to respond to each.

When we’re well locked into that dance of change – ‘in the groove’, we might say – then we’d swap between tools with wild abandon, bringing our insights back to the table to share with others as we need. In a sense, Five Elements isn’t that important as such at that phase, that mode of the dance – though in our work, we use the metaphor of toolboxes within each of the ‘rooms’, through which we’d access the respective tools, to give some kind of continuity within the wildness of the dance. (Some tools also gain a different ‘flavour’ in different spaces: for example, using SCAN in the People area has an emphasis on people and skills, whereas in the Process area its focus is more on run-time complexity.)

There’s a pattern to it – moving outward from the centre with a specific aim in mind, and then back to the centre again with the information gained through that move.

There’s a sequence to it, a distinct set of steps moving from one focus to the next – and if we try to skip any of the steps, during this default-mode phase, we’ll likely lose connection with the dance as a whole.

There’s a rhythm to it – out and back, steadily round and round, iteration after iteration, gathering new information as we go.

Round and round in that pattern, until the groove returns. And we know when the groove returns when we notice a cue-keyword that takes us off into a more-detailed space – and we then return back to that default Five Elements pattern again when we lose the groove once more. All until we’ve done ‘just enough’ of the dance, just enough exploration, and then turn to put into practice what we’ve learned in the dance. (Which itself is all part of a larger dance, of course… 🙂 )

Providing consistent guidance and governance for the overall dance of change: that’s the role of a core-level default-pattern such as Five Elements.

With Five Elements and more, we’re getting closer now to fulfilling the aim of ‘the bucket-list‘, to work our way through the Tetradian tools-inventory, and make all of them more usable and useful not just for enterprise-architectures, but for the broader dance of change. If you’d like better tools for change, or better ways to link your existing tools together, please support us on Patreon: see our Patreon page for more details on this.