“Don’t it always seem to go / that you don’t know what you’ve got till it’s gone” – so sang Joni Mitchell in ‘Big Yellow Taxi’, way back in 1970. Seems appropriate about enterprise-architecture too…

A quick recap about what’s happening for me right now. In two months’ time, I’ll be seventy years old – a not untypical time to think about retiring. Okay, yes, people like me don’t ever really retire, we keep on going one way or another, as long as we can. That’s who we are. But yeah, in relation to enterprise-architecture, there’s a real “You don’t know what you’ve got till it’s gone” moment coming up – and we need to do some proper preparation for it right now, or it really will all be gone.

So here’s the situation. The blunt reality is that the discipline that calls itself ‘enterprise-architecture’ is in a mess – and we need to be honest about that. Fifteen years ago, I set out to find ways to remedy the mess. I’ve long been one of the very few people in the EA-disciplines who’s been working on that challenge; I’ve perhaps been the only one in the world who’s been working full-time on it for the whole of that time. A vast amount of work, documented in perhaps a dozen books, ebooks and more; well over a thousand blog-posts; nearly two hundred videos; more than fifty slidedecks; and a whole lot more besides. And almost all of that is openly available to everyone for free.

The result of that work is that we do now have a solid basis for a true ‘the architecture of the enterprise’. It’s probably the only complete set of linked tools for whole-enterprise architectures that work the same way for every type of content or context, every scope and scale, every timescale, every stage of implementation. Some core themes include:

— We now have a form of architecture that can apply consistently to everywhere, including itself – see posts such as ‘Dotting the joins (the JEA version)‘ and ‘New toolsets for enterprise-architecture‘.

— We now have architecture frameworks, models and methods that focus on the underlying story for the enterprise – such as described in the blog-series on NOTES, the book ‘The enterprise as story‘, and the slidedecks ‘The enterprise is the story‘ and ‘Staging the story‘.

— We now have architecture tools and methods that do not arbitrarily assume that IT is the only thing that matters to the enterprise, and that instead emphasise context before content – such as described in the slidedecks ‘Invisible Armies‘ and ‘Where do people fit in enterprise-architecture?‘, and in videos on the Holomap:

— We now have tools, techniques and methods that work the same way for every size of organisation and enterprise, all the way out to a global scale – see the many posts on RBPEA, Really-Big-Picture Enterprise-Architecture – and all the way down to a single-person enterprise – such as described in the posts ‘Building effectiveness in a small business‘ and ‘Using SCORE to reframe the business-model‘, and the four-part post-series on ‘EA in miniature‘.

— We now have sensemaking and strategy-tools that work fractally across every type of concern and context – such as described in this slidedeck on SCORE, and in the many weblog-posts on SCAN: 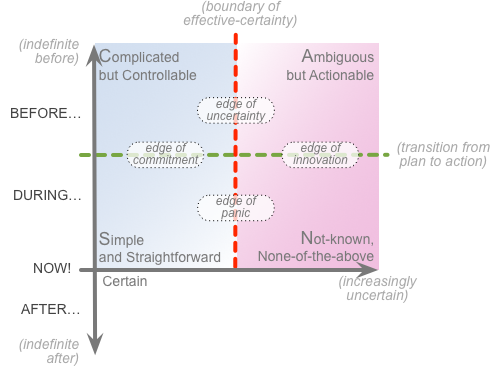 And much, much more – in essence, all of the key frameworks, tools and methods that you’d need for the core of a whole-enterprise architecture at any scope and scale.

A huge, huge amount of work – again, almost all of it already freely available for everyone.

And don’t worry, though, because that isn’t the part to which “you don’t know what you’ve got till it’s gone” is likely to apply. Not yet, anyway. All of the existing material on whole-enterprise architectures will still be around for as long as I can keep it there. If I can.

No: when we talk here about “you don’t know what you’ve got till it’s gone”, there’s no real risk to what’s already been done. The bit that’s at risk is everything that needs to happen next…

There’s a lot that needs to be finished, to make make whole-enterprise-architecture really work – to make all of that work not just more available but more accessible for everyone too. But I can’t afford to do it: I really can’t. Not like this. Not any more.

I don’t now why, but it seems that most people have no idea how much it costs to do this kind of work. Sometimes it gets really absurd: perhaps the most extreme was that one conference-organiser presumed that a fair payment for several weeks’ work, another week of international-travel hell, a keynote-presentation and a full one-day workshop on the far side of the world was a box of chocolates…

Sure, there have been occasional promises of paid-work, and over the years a handful of the smallest ones a few of them did actually come to fruition, which was good. But for the most part, it’s been fifteen years of “Jam tomorrow, but never jam today”: nothing more than that. I’ve been a key provider to the EA-community, a key innovator for that community for all of those years: yet the reality has been almost every interaction I’ve had with that community has cost me far more than I’ve earned from it. In essence, I’ve paid for it all, in every sense of that term: in essence, it’s left me burned-out, broken and broke. I’ll admit that right now I’m seriously scared about what happens next for me now, as I move into genuine old-age with almost nothing left.

So I’m sorry, but unless things change – and change a lot – then  I just can’t do this work for you. Not like this. Not unpaid. Not on my own. Not any more.

Yes, I can perhaps just about limp along like this for another couple of months. Maybe. But if there’s no significant change by that point, two months from now, then everything stops. It has to. No choice on that, now.

To be honest, I’m fresh out of ideas on what to do about this, and mostly out of any hope, too. Yet if you do want this work to continue – if you do want enterprise-architecture that can actually work – then it’s in your hands now. But there’s not much time left now. Just two months to go, before it all goes.